Knowing when to exit a trade when in profit is one of the toughest objectives for every trader.
Today we are going to look at seven profit taking strategies to help boost your trading and hopefully, secure more pips.
Let’s jump straight into them.

The most basic of all trading strategies revolve around moving averages. Since indicators were created, the moving average is one of the most frequently used methods for getting in and out of the market.

Using moving averages for your exits has the advantage of simplicity. And, if you like exits that don’t require a lot of your time, the moving average exit ranks up there as one of the best. 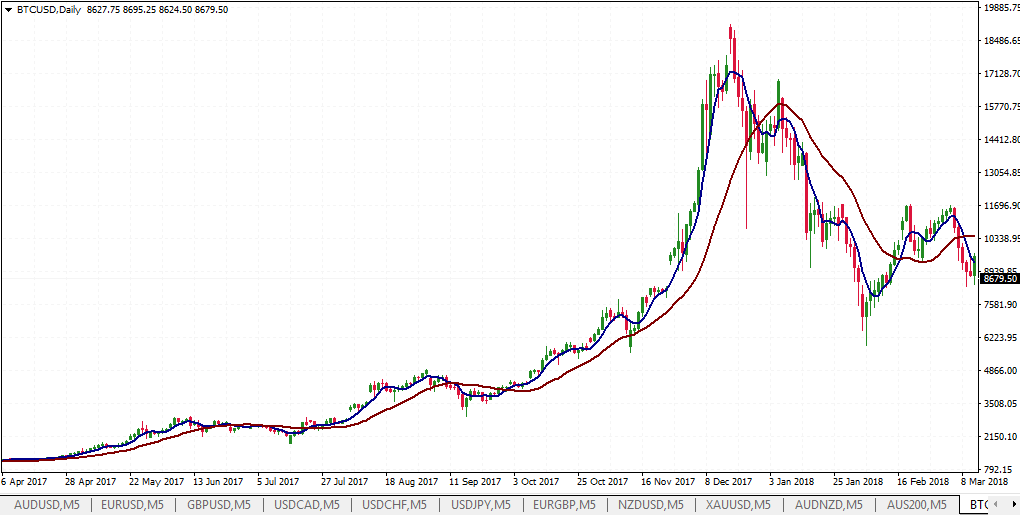 As you can see in the chart above, Bitcoin was trending powerfully during the incredible bull run of late 2017.
The 5 and 20 period moving average exit is as simple as it gets. You wait for the 5 period (blue line) to cross below the 20 period (maroon line) to signal your exit.
As you can see from the chart above, it would have provided an incredible run on Bitcoin, allowing you an excellent opportunity for profit. 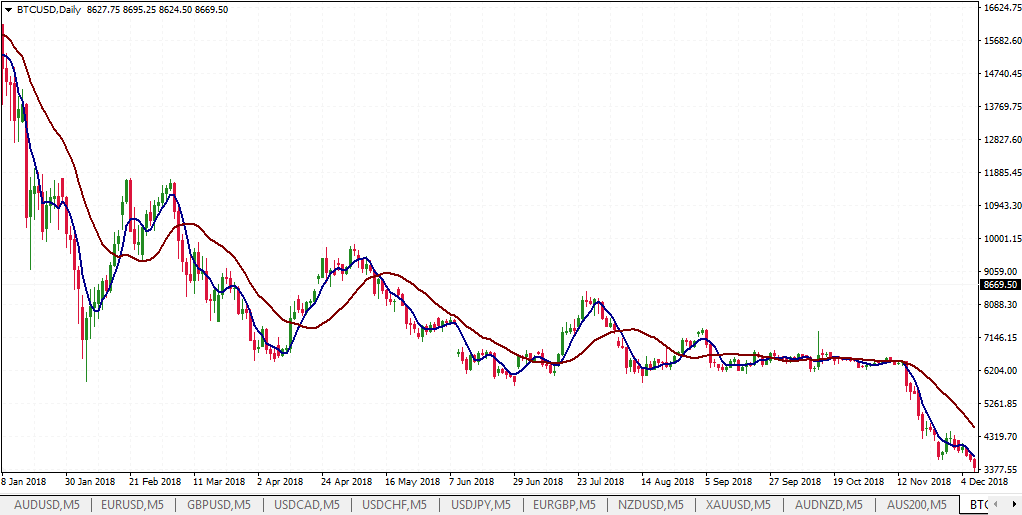 The chart above shows a consolidation period on Bitcoin when this style of exit gets ‘choppy’. This means you are getting exit signals more frequently as there is no trend in place.
And, if you are using the same signal to enter the trade, then you would be getting chopped in and out, resulting in a series of small losses and breakeven trades.

ATR stands for Average True Range. The ATR exit takes into account the volatility of the instrument you are trading at the time.

When FX pairs are volatile, it makes sense that you need to give your exit more room to move.

Conversely, when FX pairs are less volatile, a closer stop will work better, allowing you to give back less open profits. 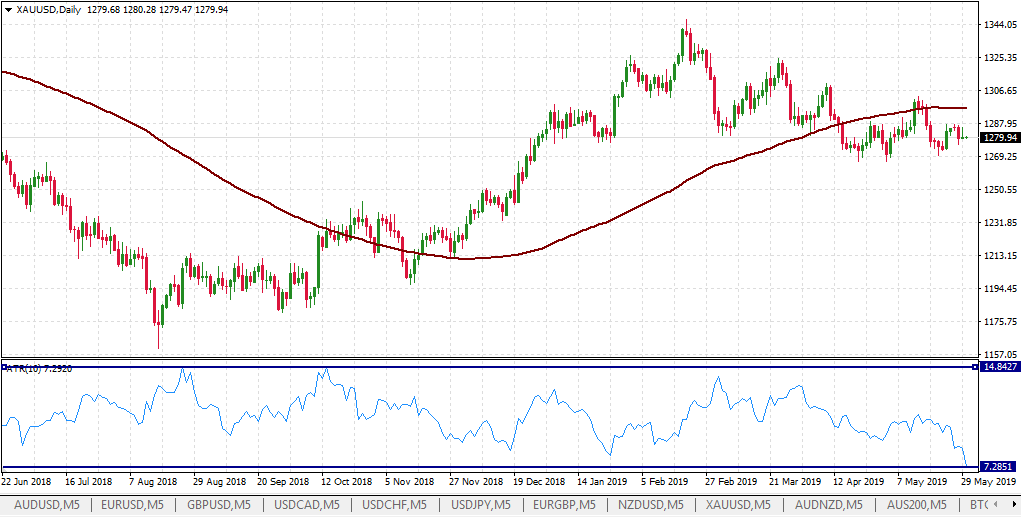 This means at its peak volatility (during this time period), Gold was moving nearly $15 per day.

The main benefit of this exit is you use the ATR to dictate your exit, so you reduce your chances of getting a premature exit.

If you set your exit at say $10, then during times of high volatility, your chances of getting whipsawed out of your trade will increase dramatically.

The beauty of this exit is that the ATR is calculated automatically for you every day, and you can use that information to adjust your exits accordingly.

3. Using Support and resistance for exits

Another exit you can use is to set a profit target based on support and resistance lines.

If you notice an FX pair, index or commodity that is range bound, you might like to take advantage of the movement by buying weakness at the bottom of the range and selling strength at the top of the range. 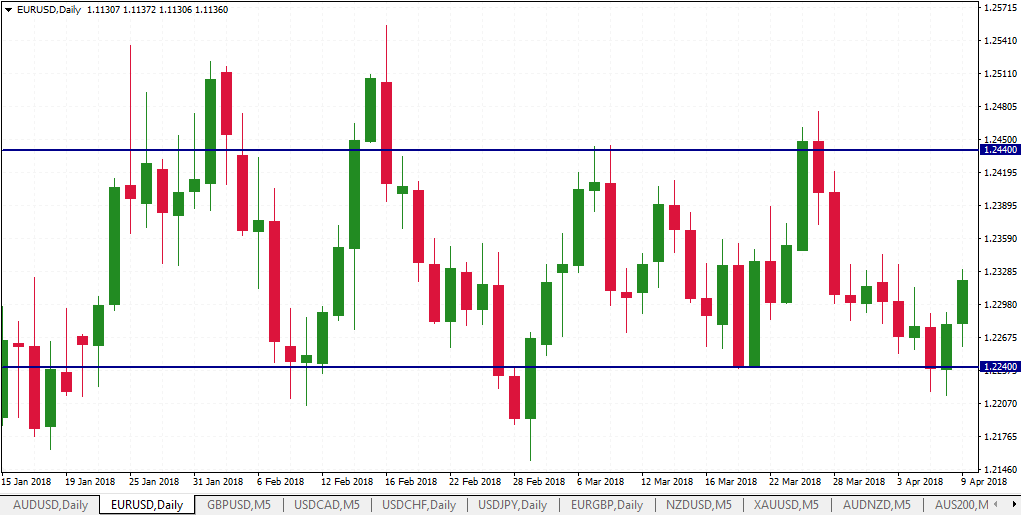 The chart above highlights a range-bound period on the Eurodollar where the Euro continued to move in a 200pip range.
If you were buying weakness on support, then you could set a profit taking exit on resistance.
Let’s say you were getting entry signals around the 1.2240 level, you would set your exit at the 1.2440 level, or 200pips higher.
You can see this range persisted from January 2018 to the end of Mar 2018, or a good three months.

Divergence is one of the strongest signals you can get when trading any instrument.
You have both bullish and bearish divergence.
Bullish divergence is when the price is hitting a lower low but your indicator, preferably an oscillator like the stochastic or RSI, is making a higher low. 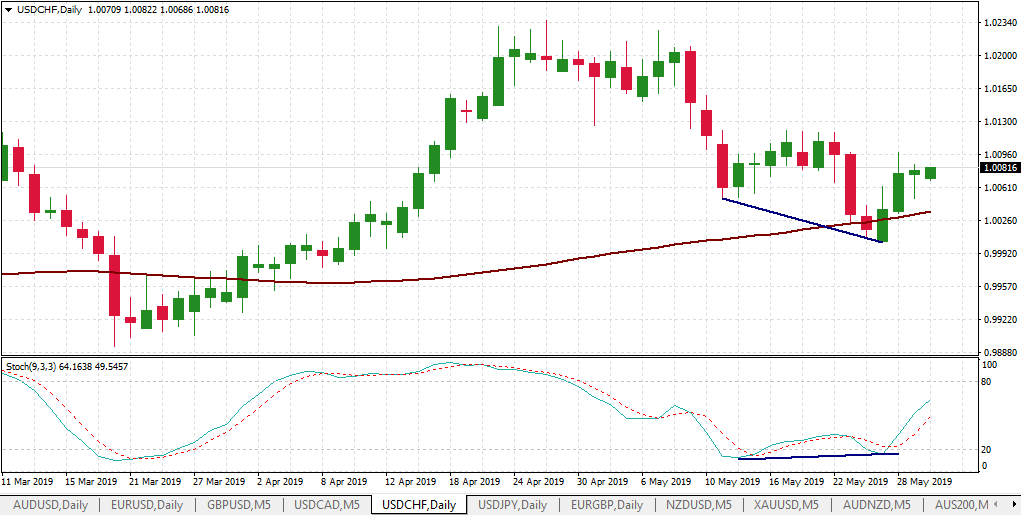 Let’s say you were short the USDCHF from the double top and were trailing a wide exit down.

But on the 24th of May 2019, you notice a bullish divergence signal.

In this case, you could exit the trade based on bullish divergence and save yourself the subsequent 77pips the USDCHF rallied from that low.

Good trades usually start to work in your favour quickly. Conversely, some trades will hover and do nothing for extended periods.
For an intraday trader, your time-based exit could be as little as 10 minutes, whereas an end of day trader could allow five days of sideways movement before exiting.
You need work your time-based exit based on your trading timeframe. 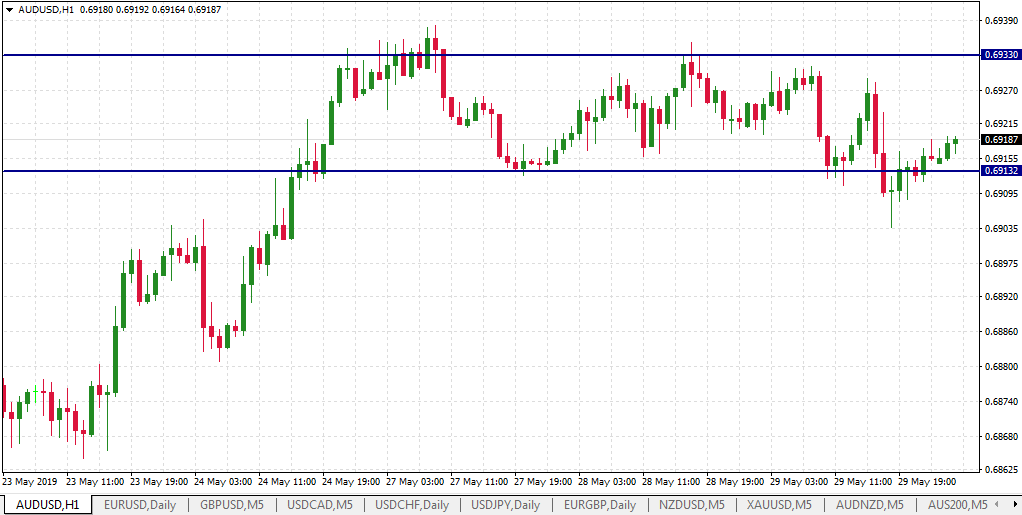 The AUDUSD hourly chart above shows a consolidation period, which would have been painful to sit through for a short-term trader.

So, instead of waiting 74 hours of pure boredom, you could have exited the trade after your set period, say 10 hours, and moved your money, energy and focus to another opportunity.

There are a handful of candlestick exits you can add to your trading strategies, and most have interesting names.
Who wants to stay in a trade after a ‘dark cloud cover’ or ‘bearish engulfing pattern’ or ‘three black crows’. Just the name alone should be enough to send you a warning signal that something is not quite right.
Your goal here is to get familiar with the full spectrum of candlestick patterns and test them to see which ones work for your trading system and time frame. 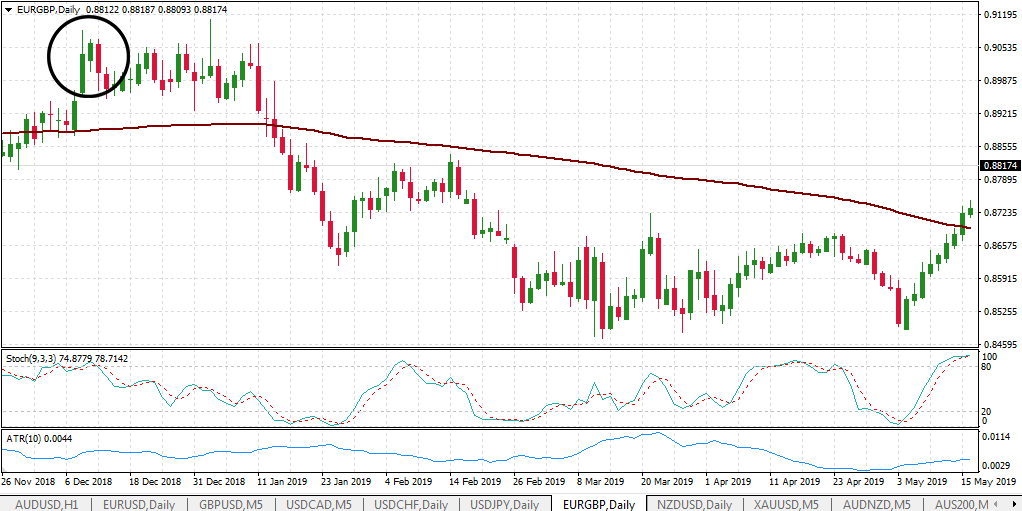 The chart above shows a bearish engulfing pattern, which is where the previous green candle is engulfed by a much bigger red candle.
The longer the 2nd candle (down day), the greater the likelihood is for a more significant sell-off.

When a major news item hits the FX markets that is a shock to the market, you may be best off exiting your position.
There are plenty of fundamental news events which are significant.
But none are bigger than a US Presidential result, especially when no-one is expecting it.
On November 8, 2016, Trump became the President-elect.

As you can see, the Dow Jones rallied 9100 points in just over a year following this major fundamental news.

If you were bearish on the news, it would have been very smart (in hindsight) to exit your position immediately.

Other fundamental news events you may like to think about when trading the FX markets include:

Now it is over to you. Which of these exits do you feel are worth testing as part of your trading systems? If you haven’t already, open a demo account with AxiTrader and start applying these exits to see which ones test more favourably.

How to deal with trading losses

In this article, we will discuss trading losses and how those negative results could actually help you improve if you deal with them in the right way.