Home / Blog / Education / What is divergence in forex

What is divergence in forex trading? 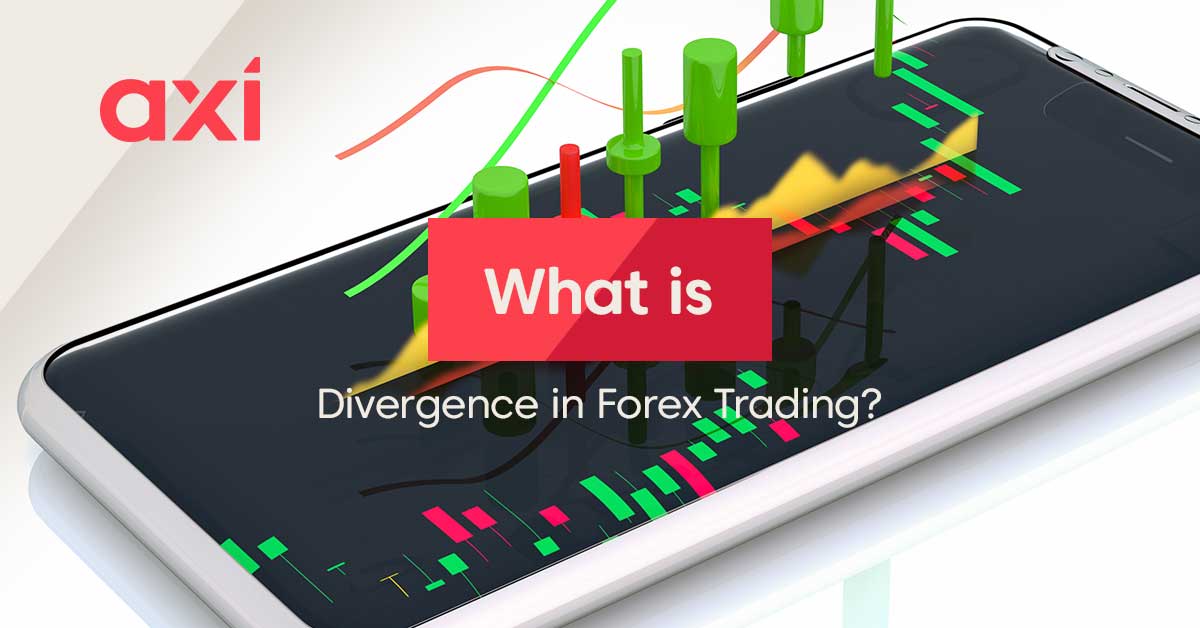 Divergence refers to when the price of a currency pair moves in one direction while the trend indicator is moving in the opposite direction. With divergence, there can be positive and negative signals.

When divergence occurs it is because there are no clear directional trends and traders use divergence as a signal to take action, usually by taking on positions with each side of the trade.

Continue reading to explore what divergence is, what indicators to use when looking for divergence and how forex traders utilise it for their trades in the market.

In its most basic form, divergence is when the price of the forex pair you are watching diverges from the technical indicators you have on your charts.

For example, the price on the chart you are looking at has just made a new higher high, but the indicator is making a lower high. This is called divergence.

What technical indicators do people use when looking for divergence?

The best types of indicators to use when looking for divergence are oscillators.

The most commonly used oscillators for identifying divergence include:

We use oscillators as they range between 0 and 100 and help us identify overbought and oversold levels on the chart. Below is a screenshot of all the oscillator indicators available on MT4 within the Oscillators folder. 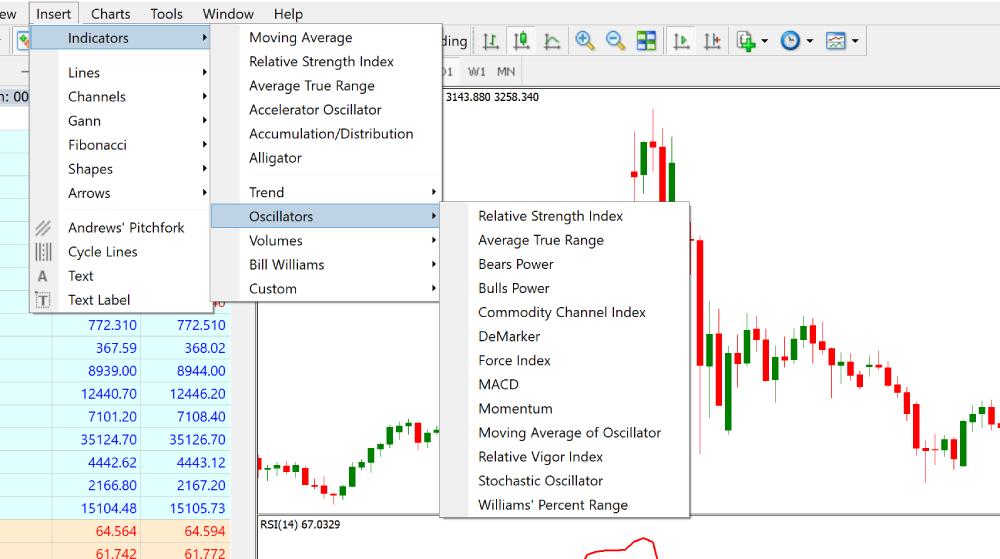 What does forex divergence tell you?

Forex divergence is all about comparing price action and the movement of a particular indicator (most commonly - an oscillator).

However, if that doesn't occur, it means the price and the oscillator are diverging from each other.

How can we use it for a good entry signal?

Divergence is one of the strongest reversal signals you can get. But do keep in mind, this is a reversal trading strategy whereby you are fading the current trend.

Below is an example of bearish divergence on the EUR/USD currency pair.

You will notice the price made a higher high, but the indicator made a lower high. 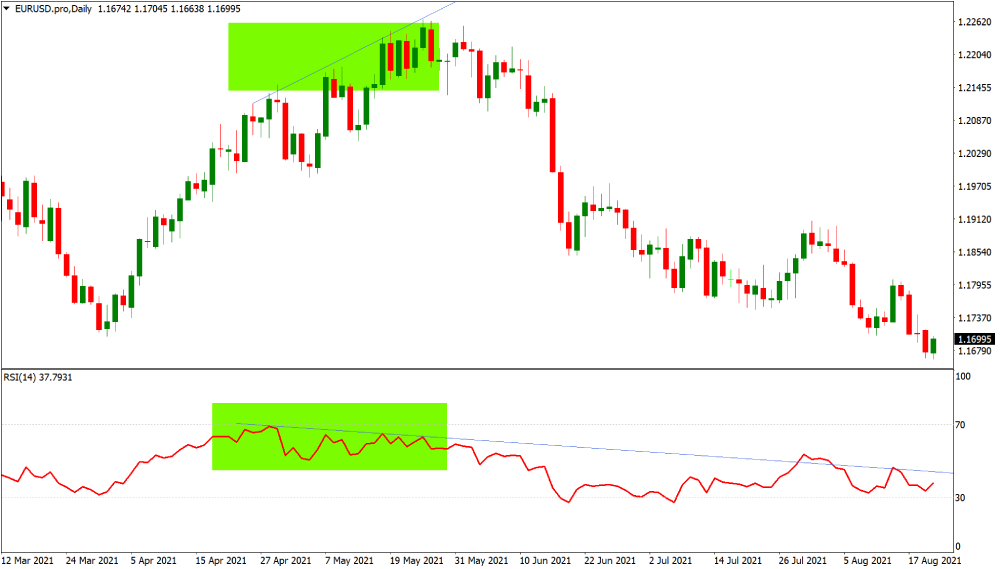 This is a classic bearish divergence signal.

Forex divergence should not be used as an entry signal itself. However, it could be a valuable addition to your existing strategy.

For example, if your strategy tells you to sell a currency pair at a major resistance level, you could incorporate the divergence pattern into your plan as an additional confirmation signal. If e.g. EUR/USD stalls at a major level of resistance, and there is bearish divergence at the same time, the odds for a reversal have just increased.

Some of the top tips about trading forex divergence include:

What is the difference between divergence and confirmation?

Here is an example of confirmation on the GBP/USD trading chart: 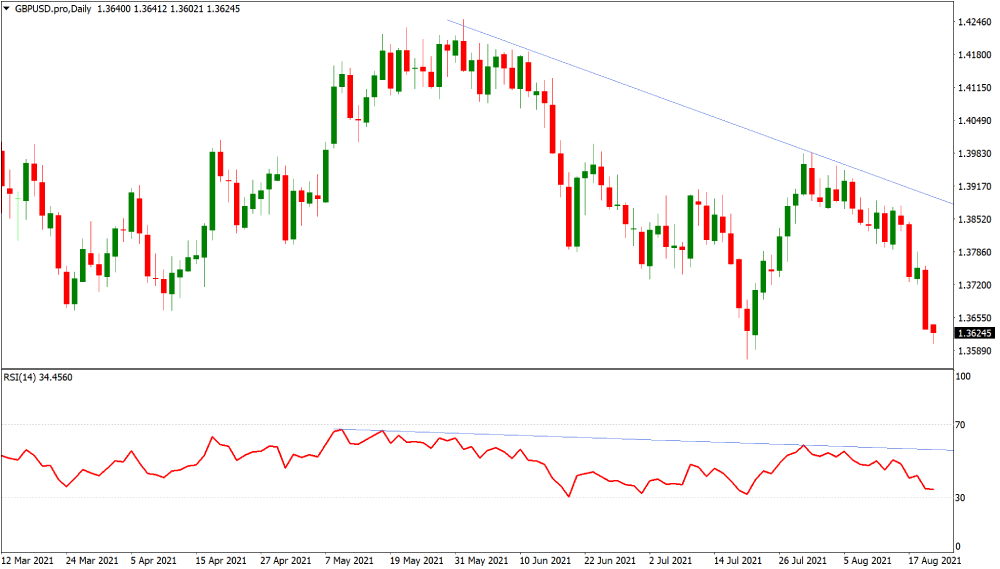 As we can see from the chart, the RSI has been moving lower along with the decline in price.

Here is an example of USD/JPY where this is not the case - and therefore we are talking about divergence. 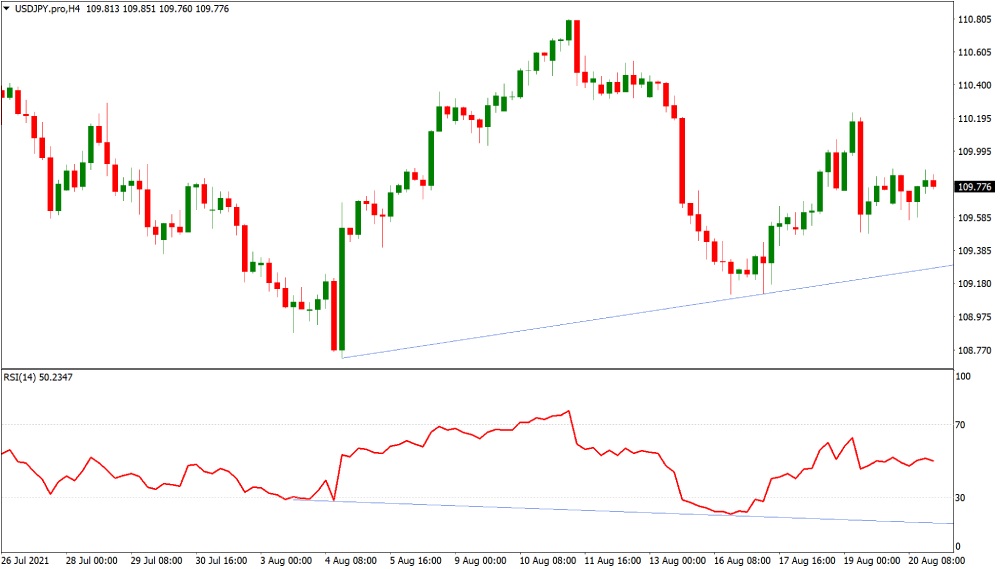 Divergence is easy to spot on a live price chart but it can sometimes be confusing what type of divergence you are seeing. In forex trading, we generally divide divergences into regular, hidden or extended.

Extended divergence is the third type and is somewhat similar to hidden divergence. Some traders don't consider it to be as strong a signal as it often fails to observe the basic rules for divergence and will occasionally occur in sideways trends. Extended divergence subdivides into:

How to trade regular divergence?

Regular bullish divergence occurs when the price is making lower lows, but the oscillator is posting higher lows. This could signal a trend reversal and indicate that a recovery might follow.

Regular bearish divergence can be spotted when the price is making a higher high, but the oscillator is posting a lower high. This could signal that the existing uptrend is running out of momentum and that a retracement might follow.

How to trade hidden divergence?

Divergence can also signal a potential trend continuation. Let's have a look at hidden divergence.

A hidden bullish divergence occurs when the pair is in an uptrend, the price is making higher lows, but the indicator is posting lower lows at the same time. This could signal a continuation of the uptrend.

On the other hand, a hidden bearish divergence will appear in a downtrend when the price is making lower highs, but the oscillator is making higher highs at the same time. This could signal that the downtrend is likely to resume.

Three examples of divergence in action

The first example is regular bearish divergence in the US500. The index was moving higher in early August, but price and the RSI indicator started to diverge after the breakout above the 4450 resistance level.

The 4450 level became a key support level after the breakout, and traders could have used the breakout below it as an entry signal. Together with the bearish divergence, it would have been a powerful combination, and as we can see, the US500 fell more than 100 points after the breakout. 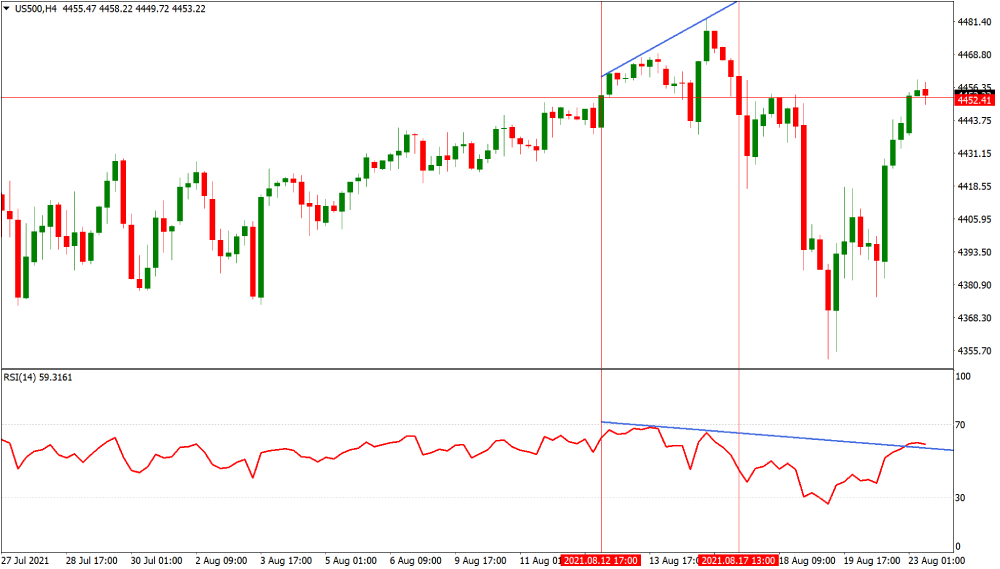 Another powerful bearish divergence signal on the US Dollar Index. 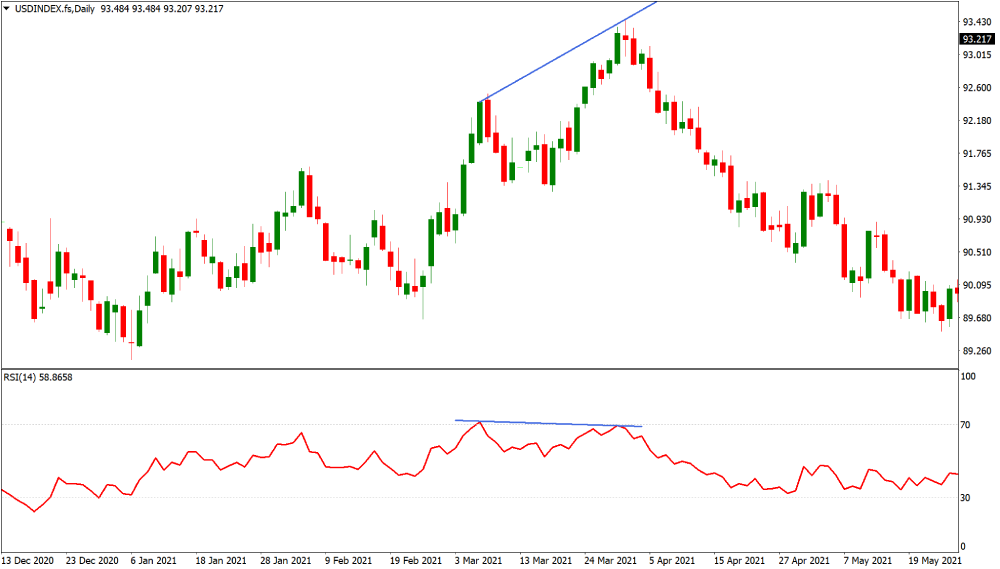 Once again, you can see the price was making a new short-term higher high while the stochastics was making a lower high.

This is often a signal that the market has run out of steam, setting up the potential for a solid risk-reward reversal trade.

Not only did the market pull back from the short-term high, but the dollar index went on to make a new short-term lower low.

For our third example, we wanted to show a signal that at best, you broke even but failing that, you likely made a loss. 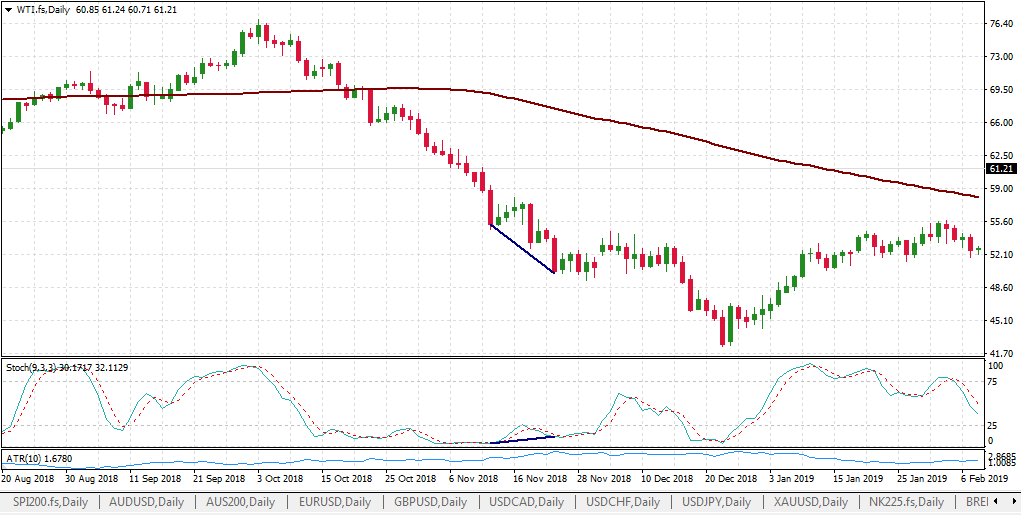 Yes, it is true. Not all trades go on to make a profit.

You will notice the chart was making a new short-term lower low, but the stochastics oscillator was making a higher high. This is a classic bullish divergence trading signal.

But let’s say you entered this trade long on confirmation of it moving higher once you got the signal. You likely had five jittery days where your initial position would have been in a loss situation. Had you have held another day, you would be in a loss situation and potentially took a hit on this trade.

This is why experienced traders trading divergence often test the market with half their normal position size before getting their full position on the trade.

You need to test, test, and then test some more. Build your confidence with a technique through testing and see if it is something you can add to your trading toolkit.

Next steps to test forex divergence

Even if divergence is not part of your trading strategy, it is worth keeping an eye on as they can act as additional confirmation signals. However, they are best used to complement your existing strategy, and not as a trading signal on their own.

How to use moving averages?

Moving averages are one of the oldest and most commonly used technical analysis tools, used for identifying trends, potential reversals and support/resistance levels.