Home / Blog / Education / Blockchain / What is a hard fork

What is a hard fork in cryptocurrency? 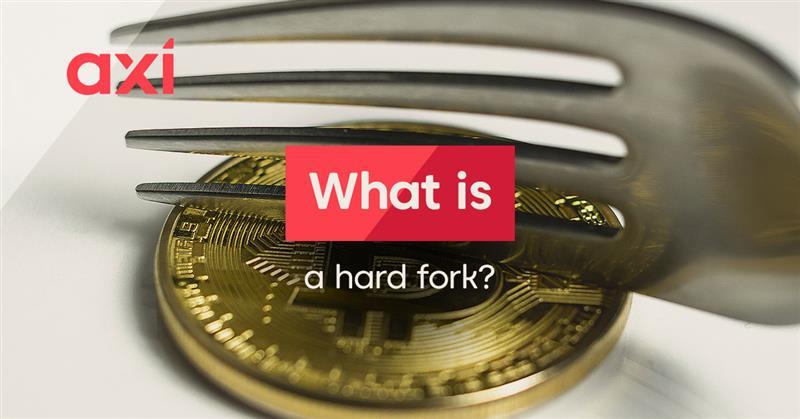 Hard forks are one of the most important aspects of decentralised crypto networks, enabling network improvements to help a cryptocurrency succeed.

A hard fork and soft fork can occur on any blockchain, initiated by members of the community or the developers. One of the main reasons a hard fork can be implemented is to fix security risks in the blockchain and from hard forks, we have seen happen in the past it can be successful.

Read on to learn everything you need to know to gain a basic understanding of hard forks.

What is a hard fork?

A hard fork is a software update carried out on a cryptocurrency protocol that isn’t backward compatible with its existing protocol. Hard forks are typically implemented to fix bugs or add new functionalities.

If some network participants don’t agree with the protocol updates, a hard fork can lead to a contentious chain split that ends up creating two cryptocurrencies that have the same history but are now operating on two separate chains.

How does a hard fork work?

Hard forks can occur in any cryptocurrency network as public blockchains, regardless of how they are built, run in the same manner - transactions are bundled in blocks, which are validated only when all the validators of a network reach consensus on it.

Since validators understand the rules of cryptocurrency networks, they can propose changes to certain areas of the protocol. Before any change is implemented, however, all the validators must reach a consensus about the update. If agreed by all, developers update the protocol of the network to reflect the change.

The fork creates a spit in the blockchain and all validators will have to upgrade their software to run the updated protocol. Nodes running the old chain will eventually realise that it's outdated and upgrade to the new chain.

However, not all validators may agree to changes in a currency's protocol. This creates a split where a group of validators continues with the current chain (legacy chain) while others upgrade to the updated new chain. Since both crypto networks have a shared history, users will have coins they were holding before the fork in both networks, i.e., if you had 100 coins before a hard fork occurred, you can spend it on the old chain, and they'll still be there on the new chain.

Although, this doesn't mean that transactions can be copied and replicated on both networks because changes in their protocols make them incompatible.

Hard forks have resulted in the increase of many Bitcoin-like digital currencies in the crypto markets, such as Bitcoin Cash (BCH), Bitcoin Gold (BTG), and Bitcoin SV (BSV).

Read more → What is blockchain technology and how does it work?

Why would developers of a cryptocurrency implement a hard fork?

Without hard forks, a cryptocurrency network is poised to become stagnant and less secure over time as new improvements are made to the protocol.

There are several reasons why hard forks occur in their networks, such as closing security loopholes, introducing new features, or reversing transactions.

When security loopholes are discovered in a crypto protocol, developers often carry out a hard fork to ensure the network is secure and protected from possible attacks in the future.

For a project to stay relevant in the crypto markets, the community of developers should be working on new features to keep up with trends, increase transaction speeds, increase/reduce block sizes, etc. For example, a hard fork can be carried out to enable a crypto network to achieve compatibility with DeFi protocols and NFTs.

In a cryptocurrency network where security holes are exploited to siphon user funds, the community sometimes resolves to hard forking to reverse the occurrence of such transactions. Although blockchains are supposed to be immutable, through a hard fork, stolen funds can be recovered in such a way that the network history is not tampered with as we'll see shortly.

Not all the community developers in a crypto network may agree to changes in the protocol. In a situation where they can't reach an agreement, one group performs a contentious hard fork, forming a divergent version of the cryptocurrency.

What's the impact of a hard fork?

Hard forks can have a negative and a positive impact on a cryptocurrency network, depending on how it was carried out.

Let’s look at a handful of impacts.

Airdrops - Hard forks that are done to form a divergent version of a cryptocurrency result in users receiving crypto airdrops of their exact holdings in the new cryptocurrency. For example, during the Bitcoin Cash (BCH) hard fork, all holders of Bitcoin (BTC) received an equivalent of their holdings in BCH on the new chain.

Improved network - Cryptocurrency protocols that were hard forked to add features experience improvements on their networks. Some protocols see their speed increase, while others can even start adding entirely new functionalities.

Network disruption - Hard forks can disrupt the operation of a cryptocurrency network. In such times, bad actors can leverage the situation to defraud users. Cryptocurrency networks usually face security threats, such as replay and 51% attacks, when a fork is not handled properly.

Also, hard forks where new currencies are formed may see one blockchain being favoured above the other, causing the price of one to increase at the expense of the other.

Does a hard fork increase price?

One of the major impacts of hard forks on cryptocurrencies is the effect on their financial value. A hard fork can cause the price of a cryptocurrency to rise or fall depending on the outcome.

When a cryptocurrency successfully adds new features to its protocol through a hard fork, the price may rise as investors are attracted to the platform and users will likely want to hold. It shows the community is serious about the long-term success of the project. For example, a crypto network that hard forks to add features like DeFi or NFTs may see a surge in network activities, which may result in a price increase.

However, a hard fork may not always be well-received by the market because malicious actors sometimes employ it as a means of conducting "pump and dump" scams. Hence, investors are sometimes skeptical of it and may choose to avoid it or sell off their coins if they already have an investment in the project.

In summary, hard forks can cause a price increase when users trust the project to perform, and developers deliver as promised. Conversely, they can result in a price crash when the market is skeptical about the fork and the reasons behind it.

What is a soft fork?

Soft forks are backward compatible changes made to the protocol of a cryptocurrency network. They are typically performed to include new features or rules in a network that don’t clash with the former rules, meaning nodes who don’t update their software to reflect the new changes can still communicate with the network.

Soft forks are considered less disruptive than hard forks because a crypto network can still operate as one blockchain even when some nodes don’t agree with changes made. Whereas with hard forks, two blockchains are created that run alongside each other and nodes will have to upgrade their software to validate blocks in the new chain.

Developers subscribe to soft forks when implementing a less drastic change and the process is usually seen as a gradual upgrade. In contrast, hard forks are mostly carried out to make radical changes in a cryptocurrency protocol.

Crypto networks like Bitcoin and Ethereum have previously used both soft and hard forks to perform updates in their protocol. 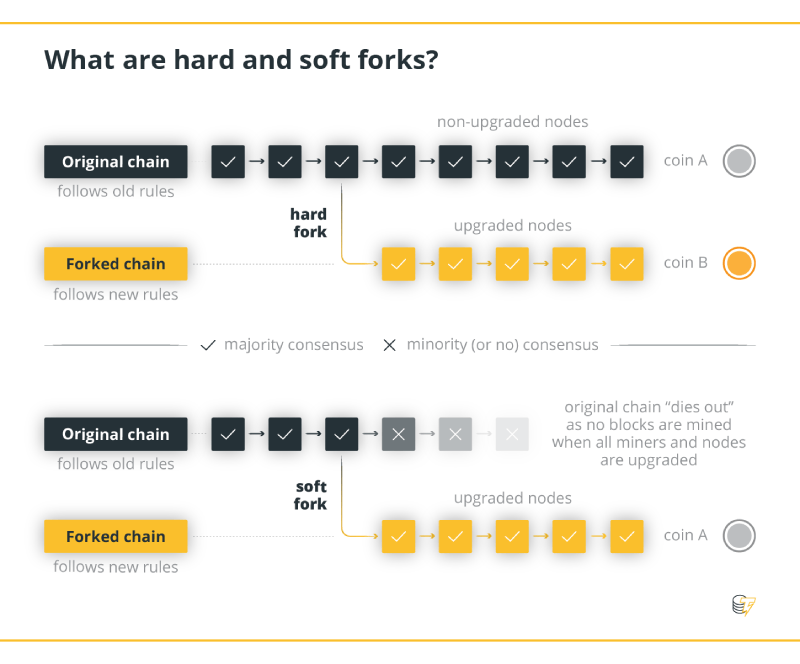 Let’s look at some examples of the most notable hard forks in the crypto market.

It's impossible to discuss hard forks without referencing the most popular fork of the Bitcoin network - Bitcoin Cash.

After several arguments and meetings on the best approach to scale the Bitcoin network, a group of miners and node operators decided to update their software by increasing block sizes from 1MB to 8MB. This update was what formed the cryptocurrency known as Bitcoin Cash (BCH). Bitcoin and Bitcoin Cash now exist as two distinct cryptocurrency networks with different rules and communities.

Apart from Bitcoin Cash, Bitcoin has been forked several times, with each forked coin eventually losing value against Bitcoin.

The DAO, which was one of the earliest DApps on the Ethereum network, raised about $150 million worth of ETH from 11,000 investors just a few weeks into its token sale. But before the funding ended, an attacker exploited security holes in the DAO's code, siphoning funds worth about $50 million at the time.

The attack would have been a serious financial blow to the Ethereum network as over 14% of ETH in circulation then was invested in the project. After much debate in the Ethereum community, a hard fork was proposed and implemented to reverse the transaction. The hard fork moved the funds to a separate smart contract that enabled investors to withdraw their funds.

But not all nodes agreed to the fork as some saw it as a breach of the immutability of blockchains. As a result, a contentious chain split occurred following the hard fork, with the original Ethereum chain taking the name Ethereum Classic.

Should you trade crypto that's going to hard fork?

Hard forks often create uncertainty for a cryptocurrency network. The community may be divided, security attacks can occur, and whales may influence the market for their benefit.

Before deciding whether or not to trade a cryptocurrency that's on the verge of a hard fork, you should consider the changes that are about to be made to its protocol and views from community members.

If the views are mostly negative, then you may not want to dabble into such projects. However, if community members are delighted about the hard fork, and from your own diligent research, it looks good, then you can go ahead and try your luck.

Remember: No matter how sure you are, hard forks may not go as planned. Only invest what you can afford to lose.

Monero (XMR) - The Monero community recently announced on its Reddit account that it would be performing a hard fork to increase its ring size from 11 to 16. They stated that an increase in ring sizes will improve the privacy of signatures and balance confirmations.

The decision was made after a consensus was reached at a Monero Research Lab (MRL) meeting on Oct 21, 2021. As time proceeds, we'll see its effect on the Monero network.

We hope that this guide will help you on your journey to buying, holding, and trading crypto. Start by trading crypto CFDs with Axi today!