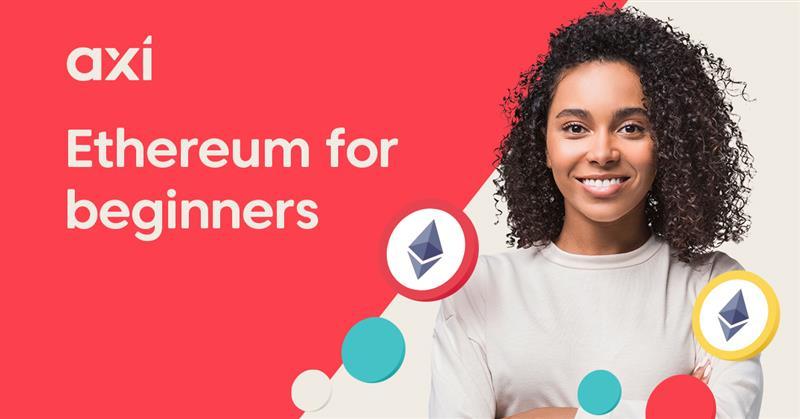 Ethereum’s ether (ETH) has emerged as the second most popular cryptocurrency after Bitcoin, with a market capitalisation in the hundreds of billions of dollars.

Ethereum is a decentralised, open-source blockchain with smart contract functionality, which allows a computer program to run exactly as programmed without possibility of fraud or third party interference. Ethereum is very different to Bitcoin, where the latter is seen as a digital currency and Ethereum was created as a platform for other projects to build on.

In this guide, we cover everything you need to know about Ethereum and Ether, including how you can trade the cryptocurrency with crypto CFDs.

What is Ethereum and how does it work?

Ethereum is a blockchain network that enables the development of self-executing smart contracts that can be used to build decentralised applications (DApps).

The second most popular crypto network in the market has emerged as the go-to blockchain for decentralised finance (DeFi), non-fungible tokens (NFTs), play-to-earn blockchain games, and decentralised autonomous organisations (DAOs).

At the core of these services is the native cryptocurrency of the network, Ether. While the Ethereum network’s cryptocurrency is also often referred to as Ethereum, you shouldn't confuse Ether (ETH) with Ethereum. The former is a cryptocurrency, while the latter is the blockchain network on which the cryptocurrency runs.

The Ethereum network uses software, called the Ethereum Virtual Machine (EVM), on thousands of computers worldwide, making it a decentralised peer-to-peer network. Interactions with the EVM are treated as transactions bundled in blocks and distributed to nodes in the network. Miners validate these transactions through a proof of work (PoW) consensus mechanism. In turn, they receive ETH as block rewards and gas fees - a transaction fee paid by users for transacting on the network.

To use the Ethereum network, you will need a digital wallet to access all the services on the blockchain.

Why has Ethereum become so popular in recent years?

While the Bitcoin network provides a digital currency that enables borderless peer-to-peer transactions and acts as a store of wealth, the Ethereum network goes beyond Bitcoin’s functionalities as a monetary network.

Ethereum acts as the infrastructure on which developers can build decentralised applications, powered by cryptocurrency and secured by blockchain technology.

Ethereum changed the way interactions are made on the internet through its so-called smart contracts. This gave room for the invention of several decentralised products and services, giving internet users more control over their data and ushering in the era of web 3.0.

In the current version of the internet, power is centralised with a handful of large tech companies that often profit at the expense of users. Web 3.0, on the other hand, aims to distribute power back to users and gives them earning opportunities while providing stronger security.

Ethereum's popularity grew as more people became aware of its decentralised solutions. Today, Ethereum is the largest and most active smart contract-enabled blockchain in the world, with new DApps launching on a weekly basis.

When was Ethereum created?

Ethereum dates back to a whitepaper published by Vitalik Buterin in 2013. Later, in 2014, the project started development and received crowdfunding through an ICO that raised over $18 million.

The original idea for Ethereum was formed by Vitalik Buterin. However, other notable figures joined in later on.

How does Ethereum mining work?

Ethereum uses a proof-of-work consensus mechanism, similar to Bitcoin, to process transactions and secure the network.

Miners have to solve computationally difficult cryptographic puzzles to produce blocks that form the blockchain. They are financially incentivised to do this through block rewards in newly minted ether and transaction fees (known as gas fees).

For miners to earn rewards, they have to compete to solve the cryptographic puzzle and validate a block. As the Ethereum network grew, mining difficulty increased, leading miners to make use of dedicated mining hardware. Miners also formed mining pools where they aggregate computing power to enable them to validate blocks faster.

Ether's supply is currently not capped, so miners will continue to earn mining rewards until a protocol change is implemented to change that. In light of Ethereum’s planned move from proof of work (PoW) to proof of stake (PoS), a protocol change is actually expected to happen in the coming years.

Ever since the launch of the Ethereum network in 2015, it has grown rapidly in popularity, attracting millions of users. However, such levels of growth mean more transactions, leading to network congestion. And as the network gets congested, the processing of transactions becomes slow and gas fees skyrocket. That’s because miners will prioritise transactions with higher transaction fees to earn larger revenue. Therefore, users competitively increase gas fees to ensure their transactions are confirmed faster.

Gas fees went to over $100 in 2021 when network activities were on a high. For a system that wants to become the decentralised world computer, 15 transactions per second (TPS) is extremely slow compared to VISA which processes up to 20,000 TPS.

The founders of Ethereum had foreseen this. This is why they have constructed several plans since 2015 to transition Ethereum to use a Proof-Of-Stake consensus mechanism. The process is already being carried out as several updates have been made on the Ethereum network. One of such updates is the 'difficulty time bomb' update, which increased the block confirmation time of the network. The plan is that the network will reach an Ice Age: difficulty will increase to a point where it will be almost impossible to find a block. Hence, helping the network to move to proof of stake.

In proof of stake, the network doesn't need miners and dedicated computer hardware. Instead, validators replace the miners. Then, validators will stake their ETH to keep the network secure. This will make the Ethereum network more energy-efficient, process transactions at a faster rate, and reduce gas fees.

Ethereum 2.0 or ETH 2.0 refers to a collection of upgrades that will improve the Ethereum network in areas of scalability, security, and sustainability.

ETH 2.0 includes innovations like the move to proof of stake, the beacon chain, the merge, and shard chains.

Ether (ETH) has had an impressive run since the token started trading in 2015. Let’s take a look at the popular token’s price action in the last few years.

2015: Ether just debuted in the crypto market. The crypto exchange Kraken added the cryptocurrency to their platform. It traded for around $2.77 before crashing to $0.68 due to a sell-off from investors who were looking to cash out the gains they made from the pre-sale.

2016: In the first quarter of 2016, ether saw a significant increase, causing its price to reach $15 and market capitalisation to cross the $1 billion mark. The price pushed further to over $20 following promises of the DAO. But ETH later crashed to around $6, following the DAO hack and Ethereum hard fork.

2017: Ether entered the year with a price of about $8. Following the ICO (initial coin offering) boom and the entire crypto market bull run, ether skyrocketed to $800, a 100x increase. The price slumped to the $500-600 range in December 2017, following the bitcoin price crash.

2020: After crashing in the first quarter due to the COVID-19 pandemic, ether staged an impressive bull run as DeFi applications grew in popularity, attracting billions of dollars. Ether skyrocketed to around $800 in December.

2021: The entire crypto market saw a massive price shift in the year. Ether's major increase followed the NFT craze and talks of the metaverse. Ether soared to a new all-time high of $4,865 before seeing a correction towards the end of the year, which drove its price to around $3,700.

What is the market capitalisation of Ethereum?

Where can I view ETH transactions?

Ethereum runs on an open blockchain network, meaning transactions can be publicly verified. You can view all ether transactions since its launch using Block explorers.

A popular one utilised by Ethereum users is Etherscan.

Ether is one of the most exciting cryptocurrencies to trade, considering its significant historical price movements combined with Ethereum’s huge potential as the infrastructure of web 3.0. Below, you will find a step-by-step guide to get you started.

How to trade Ether

Ether trading presents exciting opportunities to speculate on the price swings of ETH, considering its high volatility. ETH can be traded on crypto exchanges. Alternatively, you can trade ETH on online brokerages like Axi using crypto CFDs that offer the ability to speculate on both rising and falling prices.

You can trade ether through the steps below:

How to buy ETH

To buy ether, you'll need to open an account with a crypto exchange, own an Ethereum wallet and have fiat currencies at hand for your purchase.

With the following steps, you are good to go:

How to invest in ETH

Ether's volatility makes it an exciting investment asset for speculators. You can invest in ETH by following the steps above to purchase the currency. You can also choose to use it for staking, liquidity mining, or just safely storing it in a secure wallet.

How to store ether (ETH)

Ether is stored in a digital wallet where the owner can use it for different services offered on the Ethereum network. Depending on your needs, you can store ether using a hardware wallet, web wallet, mobile wallet, or paper wallet.

You can store your ether with these simple steps:

Discover the advantages and disadvantages of the Ethereum blockchain below:

What price is Ether expected to reach?

Considering the high volatility of ETH, giving an accurate price prediction is essentially impossible. However, several notable industry figures have shared their take on digital currency.

Conversely, Nikolaos Panigirtzoglou of JP Morgan is bearish on the cryptocurrency, noting the rise of other DeFi blockchains, causing Ethereum's lion share to plunge by 15%.

Whether or not one of these predictions will come true remains to be seen. What’s clear, however, is that Ethereum has ushered in the Web3 movement, and the Ethereum community is dedicated to retaining its pioneering position in the crypto market.

We hope that this guide will help you on your journey to buying, owning, and trading Ether. To start trading Ether CFDs with Axi today, click here.