What is a coin burn? Token burning explained 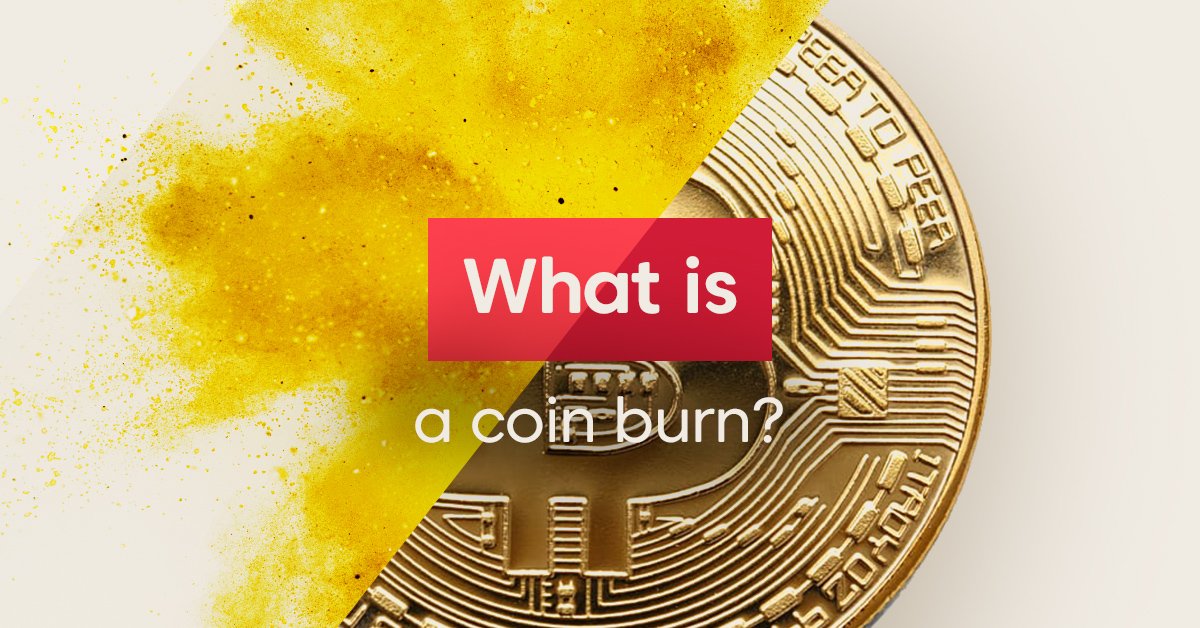 If you have just started trading or investing in crypto, you may have come across the term “coin burn.” Coin burn may sound like something scary and damaging, but it’s actually not.

In this beginner’s guide, you will learn exactly what a coin burn is and how it could affect the price of a cryptocurrency you are either looking to trade or invest in.

Jump through the table of contents to see the specific information on token burning:

What is a coin burn?

A coin burn is a method applied by crypto projects to permanently destroy or remove coins from circulation.

Coin burning typically involves sending the native cryptocurrency of a blockchain network to a specific public address (eater or burn address) with private keys that aren't accessible. The private keys of the wallet being inaccessible ensures that no one can gain access to the burnt coins, hence rendering them useless and restricting coin supply.

Coin burns are usually recorded as a transaction on a public blockchain where anyone can review and verify it at any time.

Coins can be burnt in several different ways. Below, you will find the three most common methods:

Coin burning at the protocol level

This is the type of coin burning that is part of a cryptocurrency’s protocol. The Proof-of-Burn (PoB) consensus mechanism falls into this category as coins are burned to confirm transactions and mint new tokens. This means coin burning plays a major role in the continuous functionality of cryptocurrencies that use Proof-of-Burn.

Another way of implementing coin burning at the protocol level is to utilise it as a transaction fee model to prevent spam transactions from congesting a cryptocurrency network. This way, a part of every transaction is burned, making transactions quicker and cheaper in a network.

In this category, coin burns are carried out as a means of defending a currency against inflation. The coin burn is agreed upon either by a cryptocurrency’s community or the entity behind the digital token.

One of the popular examples is the burning of unsold coins during an ICO to maintain only the supply needed. This gives the remaining coins more value and protects them from any future devaluation.

Coin burning as a means of reward

Some coin burns are conducted to reward long-term “HODLers” of a cryptocurrency. The entity behind the coin or the developers buy back some of the circulating supply and destroy it to push the price of the currency upward. This serves as a form of reward for investors committed to the project’s success.

How does coin burning work?

The process of burning coins in the crypto market can come in all shapes and sizes. The important thing is that a token's total supply is reduced permanently after a coin burn is carried out.

Some coin burns resemble stock buy-backs we know from the equity markets where the publicly traded company buys back some of its stock, thereby reducing the total number of outstanding shares to improve earnings per share. Coin burns that follow this process include major stakeholders in a cryptocurrency buying back some of the existing supply and transferring it to a burn address. Hence, the coins no longer exist and have been burned.

Another method is through the use of smart contracts, where a burn function is included in a cryptocurrency’s protocol. This method ensures tokens are easily burned as anyone can decide to call a burn function to 'destroy' some of their tokens. Sometimes the smart contract is triggered to maintain a balance between supply and demand.

A burn function is a smart contract function programmed into a cryptocurrency protocol that allows for anyone to carry out a coin burn at any time.

A burn function automatically carries out the process of burning coins and updating the total supply of a coin as long as a person has the number of coins they desire to burn.

When a burn function is executed to burn a coin, it permanently removes those coins from circulation, and the transaction is publicly verifiable on the currency's blockchain. Binance Coin (BNB) initially utilised the burn function when it was on the Ethereum network for carrying out quarterly coin burns. 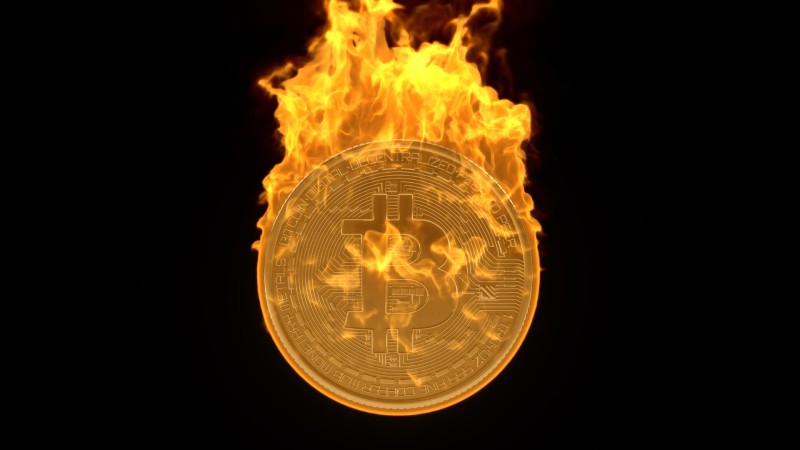 Main reasons for a token being burned

There are different reasons for burning tokens in a crypto network but the main idea is typically to improve the chances of success for the cryptocurrency.

Below are a number of specific reasons for coin burning:

Some cryptocurrencies use Proof-of-Burn (PoB) as an alternative consensus mechanism to verify transactions. This method of consensus was created to solve the problems of Bitcoin's Proof-of-Work algorithms, where miners are required to own complex mining hardware that consumes massive amounts of energy.

PoB only requires validators/miners to burn a portion of their tokens to reach a consensus on the state of a cryptocurrency ledger.

For protection against spam

Users are required to burn a part of their transactions to enable them to take place. This model reduces the chance of spam transactions flooding the network, leaving more room for healthy transactions.

To increase a cryptocurrency's value

Coin burning has been employed by many cryptocurrencies to increase their value to reward HODLers, and attract more investors. Since coin burning reduces the circulating supply of a currency and creates scarcity, the price typically increases.

Unlike fiat currencies, where governments can print money as they deem fit, most cryptocurrencies are created with a fixed supply limit. Bitcoin, for example, has a maximum coin supply of 21 million, and the more it gains momentum and mainstream adoption, the higher the price will go as there is only a limited number to go around.

This is one of the ways where tokenomics beats out fiat currencies.

Crypto projects that carry out periodic coin burns or integrate coin burns as part of their protocol typically attract investors because coin burns are often seen as an indication of long-term commitment towards the future of the project.

What is Proof of Burn?

Proof-of-Burn (PoB) is a consensus mechanism employed by cryptocurrency networks to reach consensus on the state of their ledger. Bitcoin, for example, consumes a substantial amount of energy as its Proof-of-Work consensus uses powerful mining hardware that utilises computational power to secure the network, validate transactions, and find the next blocks in the chain.

Proof-of-Burn operates in a similar way as Proof-of-Work, only that users burn their coins instead of deploying computational power to secure the network. When users burn coins, they generate more “mining power” and, hence, receive the chance to be potentially chosen as a block validator. Just the way Proof-of-Work and Proof-of-Stake (PoS) rewards miners for validating blocks, the Proof-of-Burn consensus mechanism rewards block validators with coins or credits.

This might indicate unfair advantages for early users, but the Proof-of-Burn system has integrated a mechanism where the power of burnt coins decays when new blocks are mined. Hence miners/validators will need to continue burning tokens to maintain mining power.

Proof-of-Burn is often confused with the Proof-of-Stake consensus mechanism, but they differ in their functionality. While validators can withdraw their coins back in PoS, the former requires losing coins forever. Slimcoin is one of the first cryptocurrencies to implement the Proof-of-Burn algorithm.

Who controls a coin being burned?

For a coin burn to occur in a cryptocurrency project, the project's community must typically first agree through a voting process via the usage of governance tokens. The core developers of the project then carry out the burning process.

Sometimes, the company behind a project can also decide to just buy a portion of the digital token and send it to a burn address without seeking approval from its community.

For some cryptocurrencies, coin burning is part of their protocol.

What does token burning do for the crypto market?

The inflation rate of most countries is increasing daily due to the excessive printing of cash.

Zimbabwe, for example, famously experienced hyperinflation that saw 100 billion Zimbabwe dollars trading for just one US dollar at the height of its economic woes.

The crypto market, however, has moved in the opposite direction, partly due to the frequent burning of tokens. Instead of printing currencies in excess and weakening their value, crypto projects reduce the supply of their digital currency or token to make it potentially more valuable. This is a key reason people are considering saving their money in cryptocurrencies, like Bitcoin, instead of traditional currencies.

The crypto market might have found a successful way of preserving wealth for cryptocurrency investors through token burning.

What are the benefits of token burning?

There are several benefits to a crypto network and its investors when a coin burn occurs. Here are the main benefits:

There have been many coin burn events since the emergence of all the altcoins. Some of the most popular events include:

Binance has implemented quarterly burns of their native token BNB to reduce its total supply. Binance aims to hold the burn events every quarter until 100,000,000 BNB tokens are removed from existence which accounts for 50% of the total BNB supply.

A particular number of BNB is burned every quarter according to the trading volume on their exchange. Binance has completed 16 burn events with over 31,863,791 BNB burnt in total. The burn, which started as a smart contract function when BNB initially launched on the Ethereum blockchain, is now carried out as a specific command on the Binance Chain.

SafeMoon is a popular meme coin operating on Binance Smart Chain (BSC) that initially had a supply of one quadrillion. However, at launch, about 223 trillion tokens were burned, reducing the supply to 777 trillion tokens. Since then, developers have been manually burning tokens as over 424 million SafeMoon tokens have been destroyed so far.

In November 2019, Stellar destroyed about 50% of its total supply i.e., over 55 billion XLM tokens were destroyed. The Stellar Development Foundation (SDF) stated that the coin burn was to trim down XLM's supply to the amount needed by its community. The burn received a positive welcome from the market as it led to a short-term price increase of over 30% in the value of XLM tokens.

If you are looking to trade or invest in a cryptocurrency with built-in or planned coin burns, be mindful that the reduction of circulating supply will likely cause price swings that will affect the value of your holdings.

Take this guide on coin burns in the crypto market into consideration when you start trading or investing in new crypto projects. Sign up for an Axi trading account and start trading crypto cfds online.