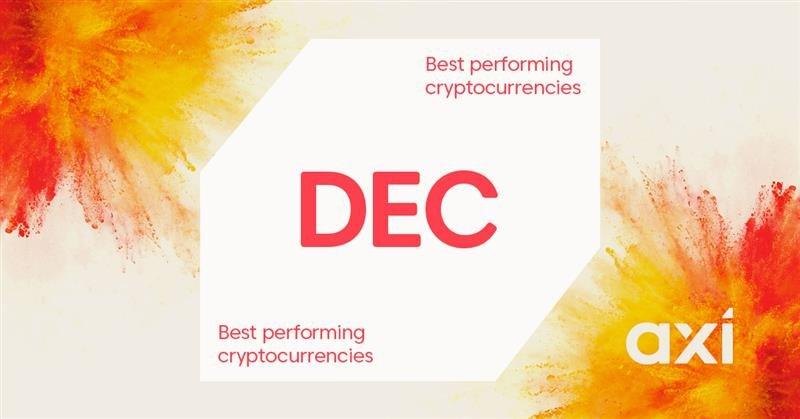 December was a difficult month for the crypto markets, with most leading cryptocurrencies consolidating to close the month lower.

Bitcoin (BTC) and Ethereum (ETH), the two largest crypto assets by market capitalisation dropped in value by 19.54% and 18.04%, respectively. However, a handful of digital assets managed to go against the trend and book gains in December.

Below, you will find a list of the top ten performing digital assets in November with a market capitalisation of over $1 billion.

In a month where the crypto market largely saw red, Near jumped over 90% to reach a new all-time high. The layer-1 blockchain saw massive price gain after the integration of booming decentralised stablecoin, Terra USD (UST) on its ecosystem.

Near jumped over 80% immediately after UST went live on its network. Also, its November sharding update, Nightshade, has increased the efficiency of the network. Near currently sits at #24 among top cryptocurrencies by market capitalisation.

The Terra ecosystem continued its impressive growth in December as its native token LUNA skyrocketed to a new all-time high. The token broke into the top ten cryptocurrencies by market capitalisation for the first time. The chain also flipped Binance Smart Chain to become the second in terms of total value locked (TVL), just behind Ethereum, with over $18 billion locked in its network.

Luna's growth follows the burning of over $2.7 billion LUNA tokens and the massive growth of its decentralised stablecoin UST. UST flipped DAI to become the largest stablecoin with over $10 billion market capitalisation. LUNA is currently the 9th largest cryptocurrency by market cap.

While most major tokens were bleeding, the MATIC token of the popular layer-2 blockchain, Polygon, was recording new all-time highs. After several attempts, MATIC finally hit a new all-time high of $2.92. Polygon announced the onboarding of Uniswap v3 (UNI) on its network after 72+ million supporting votes. This increased the number of active addresses on Polygon due to the cheaper fees it offers.

NFT activities in the network also increased significantly after Polygon Studios’ partnership with GuardianLink. The network recorded over 1.3 million NFT sales in December. Ethereum whales also contributed to the price increase as they accumulated millions of MATIC tokens. MATIC is currently the 14th largest cryptocurrency by market cap.

ROSE, the native token of the Oasis Network, increased over 70% since December 20. ROSE rise comes off a $160 million funding, which is aimed at encouraging developers to build on the Oasis Network.

The project also ventured into the NFT space by launching its own NFT project, Oasis AI Rose NFTs. Oasis ecosystem is also expanding as its first decentralised exchange, YuzuSwap, raised $2 million in funding. And its first project launchpad, LaunchGarden, which will give Oasis projects easy access to users, went live in December. ROSE currently ranks #78 among top cryptocurrencies by market cap.

OKB is used for paying trading fees, granting users access to voting, and receiving staking rewards on the OKEx exchange. Since March 2021, OKB has maintained a bullish trend that continued in December, even with the stagnancy of the crypto market. One major reason for the growth of OKB is the increased popularity of the OKEx exchange among crypto investors. OKB's steady growth sees it occupy #75 among top cryptocurrencies by market cap.

After a poor run since March, SUSHI, the native token of the highly liquid decentralised exchange, SushiSwap, soared over 50% in the last week of December. SUSHI's rise is fueled majorly by excitements surrounding rumours of an internal restructuring that will see DeFi cult hero, Daniele Sestagalli, become a part of the project. Daniele Sestagalli's record with several leading DeFi projects means SushiSwap may be set for more growth.

Also, the accumulation of SUSHI by whales contributed to the rise of the token in December, according to Santiment. SUSHI is the 92nd largest cryptocurrency by market cap.

After reaching a low of $18.88 in the second week, YFI soared over 120% before experiencing a little correction. YFI's strong December comes off several proposals to improve its tokenomics. One that stood out is the change it will bring to Yearn Governance. Another proposal driving adoption is to "direct a portion of YFI bought back by the Treasury as rewards to YFI token holders who actively participate in Yearn Governance."

The recent price increase has also made the token gain popularity among investors. Yearn Finance is the 83rd largest cryptocurrency by market cap.

The native token of enterprise blockchain, XDC Network, XDC, recovered back some of its price loss after crashing from the second week of November into December. XDC's price increase comes off the launch of SuperBullsNFT first-ever NFT, Golden Bull, on the network.

XDC also adopted the Euro Stablecoin (EURS) into its ecosystem to foster liquidity and bring trade finance on-chain. The network is gradually gaining adoption as more people are becoming aware of its eye-catching solutions. XDC sits at #87 among top cryptocurrencies by market cap.

The governance token of one of the biggest DeFi platforms, Curve Finance, regained momentum in December. Just a few weeks after dropping steam, CRV came back up again as its yield-boosting app, Convex Finance, reached nearly $20 billion in total value locked (TVL), making it the second-largest DeFi protocol by TVL.

In a season where many DeFi protocols went silent, the so-called "Curve Wars" propelled CRV back to its former heights. CRV is currently the 57th largest cryptocurrency by market cap.

MultiChain, its largest DeFi application, has about $2.15 billion locked. While SpookySwap, Tomb Finance, and Geist record $976, $936, and $687 million locked, respectively. Fantom is the 28th largest cryptocurrency by market cap.

*Market capitalisation and price percentage as of Dec. 31th, 2021.

Join in on the action

We hope that this guide will help you on your journey to buying, holding, and trading crypto. Sign up for a free Axi trading account today to start trading cryptocurrency CFDs.