What is the DAX 40 and how to trade it? - Index Series 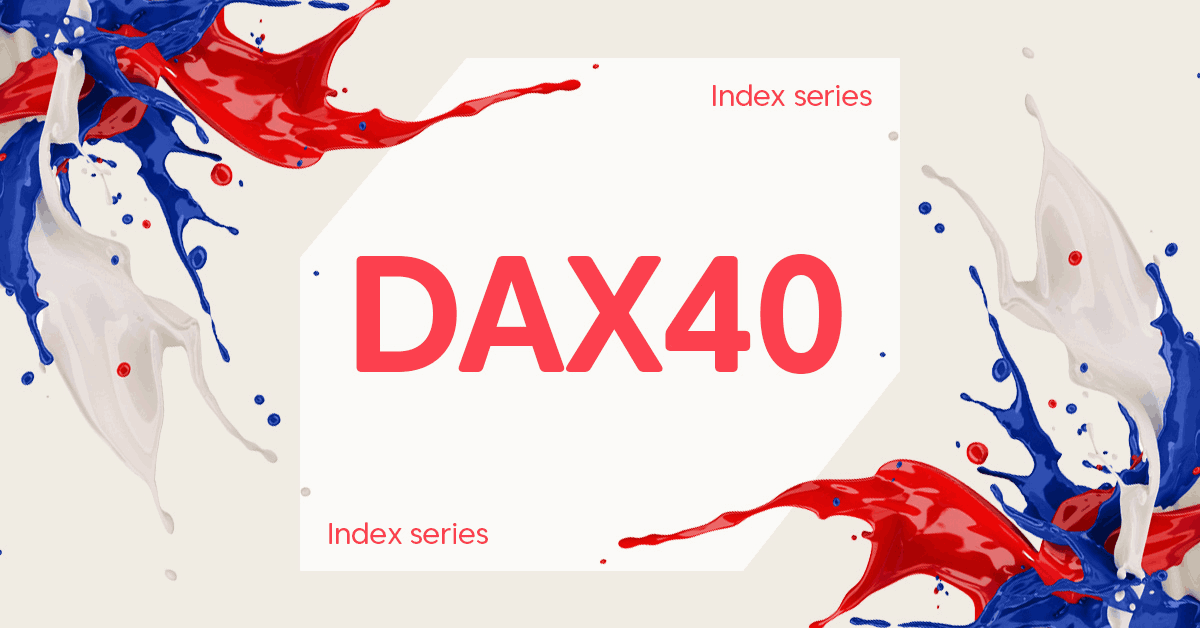 The DAX 40 is not only Germany's leading stock index, but also widely followed worldwide. When you hear analysts commenting on the performance of stock markets in Continental Europe, the German index is very likely the first one that will be mentioned.

Before we discuss how to trade indices like the DAX, let us have a look at what this index represents and the largest companies included in it.

The DAX 40 (Deutscher Aktienindex) tracks the performance of the 40 largest German companies listed on the Frankfurt Stock Exchange. The constituents are picked by their free-float market capitalisation. It is Germany's most important stock index, but also widely followed by traders and investors worldwide, given the significant role Germany is playing in the global economy.

The index was created on 1st July 1988 and started trading at 1163 points. It is often seen as an important indicator for the state of the German economy as it consists of some of the country's most important companies. The DAX is Germany's equivalent to the Dow Jones in the United States.

For the majority of its history, the DAX was known as the "DAX 30" as it consisted of the 30 largest companies listed on the Frankfurt Stock Exchange.

The change to 40 constituents was implemented in September 2021 and it included stricter index listing criteria and new de-listing rules. This came in response to the Wirecard scandal.

How is the DAX 40 calculated?

To be part of the DAX, companies must fulfill some basic criteria. They must be listed on the Frankfurt Stock Exchange, have a minimum free float of 10%, have a legal or operating headquarter in Germany, and publish their quarterly/annual reports timely.

The actual selection of the constituents is based on free-float market capitalisation, and this is reviewed quarterly. A single company cannot have an index weighting of more than 10%.

What are the DAX trading hours?

What sectors are in the DAX?

As we can see on the chart below, Chemicals is the largest sector, making up almost 16% of the index. This is closely followed by the Industrial sector at 15%. The Automobile sector with the two heavyweights Volkswagen and Daimler is next, followed by Pharma & Healthcare - together they make up roughly 20% of the index. 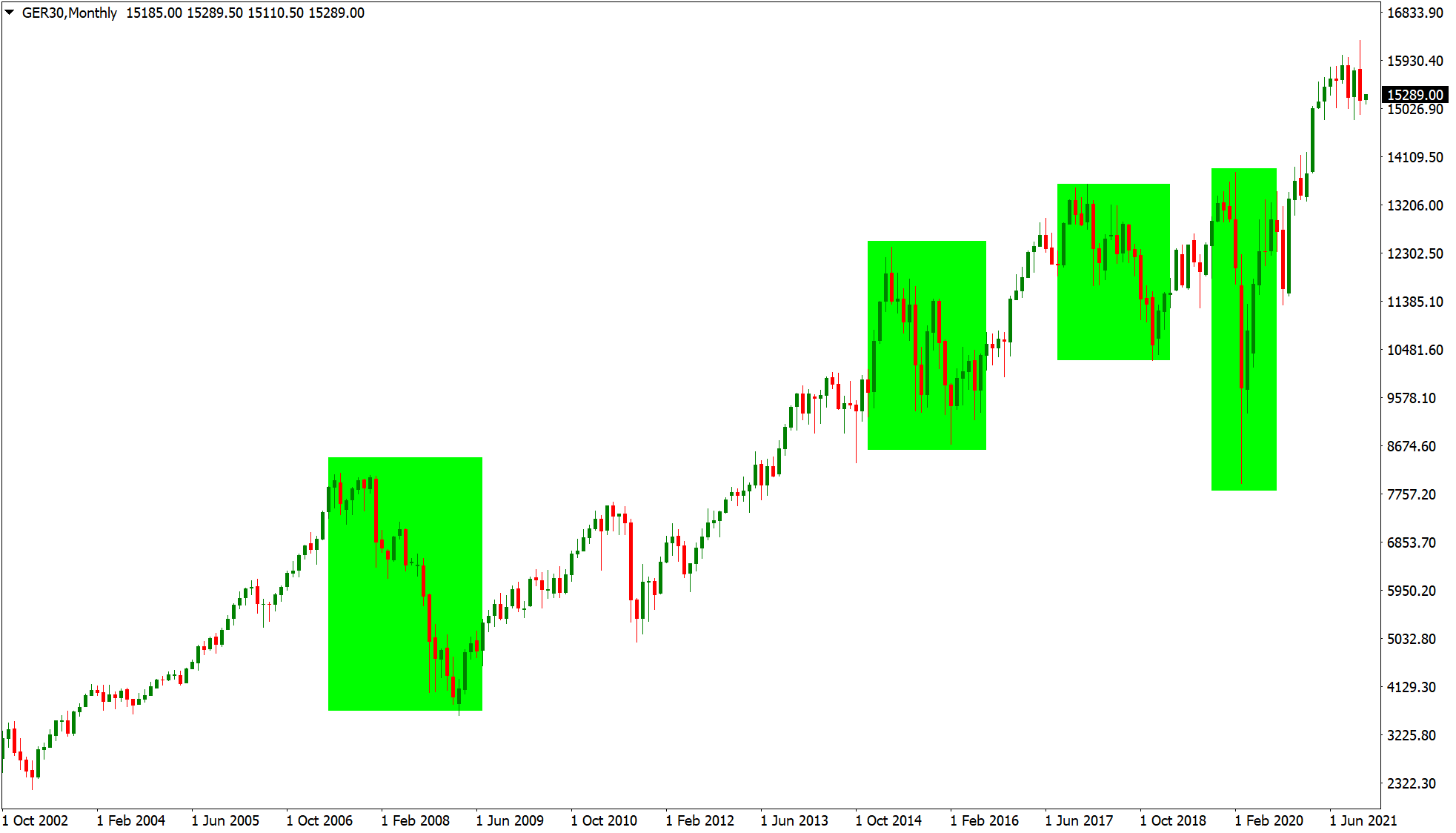 Contract for Difference (CFDs) is one of the ways you can trade the DAX cost-effectively and efficiently. Generally, brokers offer a CFD based on the cash index (GER30) and a CFD based on the underlying futures contract (DAX30.fs).

When you trade indices online using CFDs, you can speculate on the direction of the underlying instrument (the DAX) without owning it or any of its constituents. You can make use of leverage and you will have the ability to go both long and short.

This can prove especially useful during a downturn. Most investors want to avoid a reshuffling of their portfolio as the costs can quickly add up and it is incredibly difficult to time the market correctly. Therefore, instead of selling a large part of your portfolio when you anticipate a correction, you could use CFDs to speculate on falling prices.

Whether the cash CFD (GER30) or futures CFD (DAX30.fs) will be more suitable for you will primarily depend on your trading style. If you hold positions for a short period of time, you might prefer the GER30 as it has low spreads. On the other hand, if you are a long-term trader you might prefer the DAX30.fs as there are no swap charges.

Exchange Traded Funds (ETFs) are the most popular way to invest in the German index. It is more cost-effective than buying individual shares and the rebalancing is done frequently.

The largest DAX ETFs are:

The ETFs with the lowest TER (total expense ratio) are:

Most DAX ETFs are similar and essentially just the track the performance of the index. When comparing the different ETFs, investors usually look at the total expense ratio (TER) - i.e. how much it will cost to hold the ETF - as well as how much money the ETF has under management and where it is domiciled.

The 10 largest companies by market cap are:

Read more → What is the difference between the cash and futures market?

There are a few things that move the DAX 40, the main ones are listed here:

Economic data - German economic data will affect the domestic stock market. Depending on the nature of the data, some companies will be more affected, while others will be less or not affected at all. For example, rising interest rates would have a larger impact on financial services companies than on others.

Earnings - Quarterly and annual results, forecasts or company news can all affect the share price of a company, and therefore the value of the DAX. Given the large weight that the top 10 companies in the DAX have, investors pay particular attention to their earnings and forecasts. You can make use of the table above to get an idea of which companies are more likely to move the DAX - the higher the weighting of the constituent, the higher the impact a sudden move in its share price can have on the index.

Currency fluctuations - Trade plays an important factor in Germany. The country is the world's third largest exporter and third largest importer. This means that the value of the Euro can have a significant impact on the DAX. A rising Euro would be bad news for exporters, while a major devaluation of the currency would make life more difficult for importers.

What is the average return on DAX 40?

The table below looks at the net return of the DAX. We can see that the 5-year annualised return was 7.9%, with a 30-day annualised volatility of 16.8%.

What does the performance of the DAX show us?

Traditionally, the DAX has been lagging behind its US peers. The index was hit harder in March 2020 when the pandemic started to get out of control, and the recovery was slower too.

While there are different reasons for this, one factor is the lack of technology companies in the index. U.S. markets were boosted by the outperformance of leading tech companies such as Amazon, Apple and Google. Meanwhile, if we look at the DAX components, we will largely see a list of blue-chip stocks.

Despite that, the DAX has performed well over the past decade and managed to reach a new record high in November 2021.

The advantages of the DAX 40 are:

The disadvantages of the DAX 40 are:

Looking to learn more about other indices: