Amazon is a multinational technology company with headquarters in Seattle, United States. While Amazon became a well-recognised brand due to its online marketplace with the same name, the company's meteoric growth has allowed it to expand in various other fields - from cloud computing to satellite internet and autonomous vehicles.

Amazon.com, Inc. was listed on the NASDAQ after its initial public offering in May 1997, with the ticker AMZN.

Amazon was founded by Jeff Bezos in 1994. The company was initially called Cadabra Inc. and was operated out of Bezos' garage. He changed the company's name shortly after founding the company, and it has been known as Amazon since then.

Amazon.com was launched as an online bookshop, but after its IPO, it quickly expanded to selling music and videos. In the following years, amazon.com would become an online marketplace for a variety of products.

The e-commerce company managed to become profitable for the first time in 2001, shortly after the dot-com bubble burst that caused many internet companies to perish. Amazon became more resilient and expanded its business, launching Amazon Web Services (AWS) in 2002. Today, AWS is one of the key drivers of growth for the company.

To put Amazon's meteoric rise into perspective, let us look at some key figures:

While Amazon is famous for its online marketplace, its list of products and services grew exponentially in the past decade. Some of the major ones are:

The list of companies owned by Amazon is quite long, so we will present you the most important ones:

In May 2021, Amazon announced it intends to acquire MGM - a major media company - but the sale is yet to go through.

How to buy Amazon shares

Depending on what type of trader you are, the trading platform can also be an important factor. Day traders who often use technical analysis might require an advanced platform with sophisticated charting tools. On the other hand, long-term investors could feel comfortable managing their portfolio simply from the broker's mobile app.

After you have chosen your broker you need to decide what your budget is and how much you will spend on the Amazon shares. Trading share CFDs gives you the ability to use margin. This means you only need to put up a small percentage of the full value of a trade in order to open the position.

Make sure to also consider technical analysis when reviewing the stock. If you are a beginner trader these concepts may be new to you so you can learn the basics from the links mentioned above or can get a better understanding from our free share CFDs trading course.

There are two direct ways of buying Amazon shares:

Another way to trade Amazon is through index trading. One such index is the NASDAQ 100, where Amazon is a major constituent. The NASDAQ 100 is generally available as a Cash CFD or a Futures CFD. Cash CFDs have lower spreads and are more suitable for short-term traders, while Futures CFDs are popular amongst position traders as no swap fees will be charged.

How to invest in Amazon

Buying Amazon shares directly is not the only way to invest in the company. Many investors might already own Amazon shares without being aware of it. Amazon is a major constituent of the NASDAQ index, and as such, many popular ETFs also have exposure to it.

Some popular ETFs that include Amazon shares in their holdings are:

Major mutual funds with notable exposure to Amazon are:

For example, Amazon shares make up 7.82% of holdings of the QQQ ETF, which is one of the largest and most popular ETFs worldwide with more than $200 billion USD under management. The ETF has delivered an annualised return of 23.10% over a 10 year period.

Amazon went public in May 1997. The initial public offering (IPO) was priced at $18 per share.

Let's have a look at Amazon's historical stock price movement:

As of January 2022, Amazon has a market capitalisation of $1.585 trillion, making it the world's 5th most valuable company measured by market cap.

Amazon's market cap has been rising steadily over the past few years. The pandemic gave the company a massive boost with online sales surging.

Amazon's market cap stood at $1 trillion at the beginning of 2020 and increased to $1.6 trillion within one year. It stagnated during 2021 as concerns over underperforming results and rising costs weighed on the stock.

How many shares of AMZN stock are there?

Amazon has currently 507 million shares outstanding, out of which 456 million are floating. As of December 2021, the number of shares shorted stood at 3.57 million, which represents 0.82% of the shares outstanding. This is higher than some of the other tech giants such as Apple and Alphabet.

What percentage of Amazon is owned by insiders or institutions?

Does AMZN pay a dividend?

Dividend payments have become more common in the technology industry in the past few years. However, Amazon remains to be one of the major tech giants that so far haven't paid out any dividends yet. Instead, the company continues to reinvest the cash back into the business.

Will Amazon ever start paying out dividends? At some point, Amazon will mature and might reconsider its strategy, as did Apple for example. There are no indications though that this will occur in the near future, so investors will continue looking at it as a growth stock rather than a dividend stock.

Can Amazon shares be traded pre-market and after-hours?

Amazon is listed on the NASDAQ exchange and the regular trading hours are 9:30AM to 4:00PM.

Is it a good time to buy Amazon stock?

In 2021, Amazon shares underperformed against its big tech peers and disappointed many investors. It posted a return of only 2.4% for the year, while the NASDAQ 100 saw a return of more than 26%.

What is behind the underwhelming performance?

Investors are particularly concerned about the large increase in costs driven by a very tight labour market in the United States. AWS remains a key driver of growth, but other major Amazon segments have seen a decline in profits.

It is not just the labour supply shortages that are causing Amazon headaches, the company is also facing increased wage costs and global supply chain issues.

This brings us back to the original question - is it a good time to buy Amazon shares?

Technical Analysis for AMZN by TradingView

Tech stocks had a bumpy start to 2022 as investors are facing tighter financial conditions. Nevertheless, Amazon is slowly turning into a mature company with a lot of cash on its books and might therefore weather the storm better than some of the other major tech companies. Amazon will also start to benefit gradually from the pandemic-related investments it made over the past two years.

Let's have a look at what the charts are signalling

The daily RSI suggests that Amazon has entered oversold territory. Investors will be keeping a close eye on the psychological support level at $3,000. A breakout below this level could lead to momentum selling and intensify the pressure on the stock in the near-term. 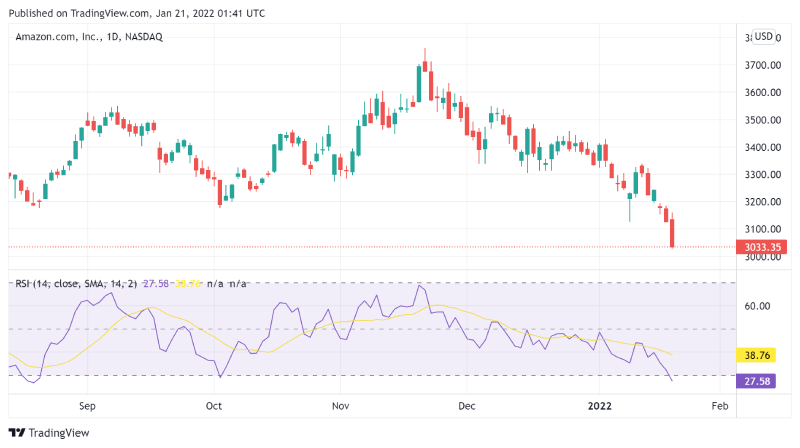 AMZN is likely to find strong support ahead of $2862, which is the September 2021 low. A rebound from there could take the stock back to $3,000, where AMZN bulls stand the chance to regain the upper hand. 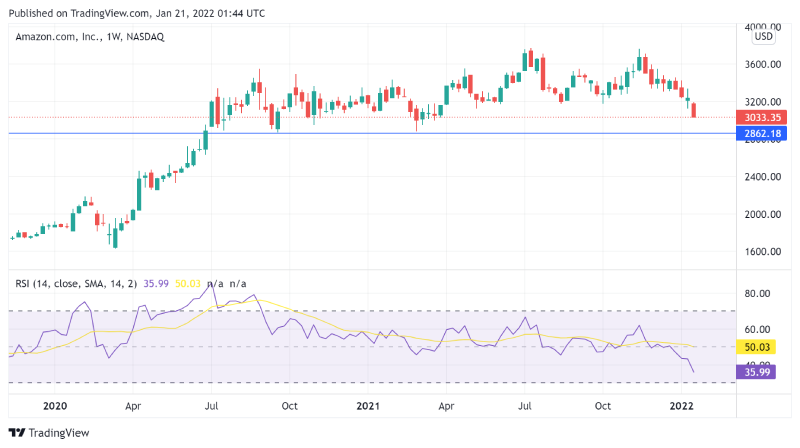 Start trading AMZN shares today when you sign up for a live trading account with Axi. Go long or short on Amazon commission-free!

Discover the latest on TSLA shares including market cap, stock price, trading hours and how to buy the stock.