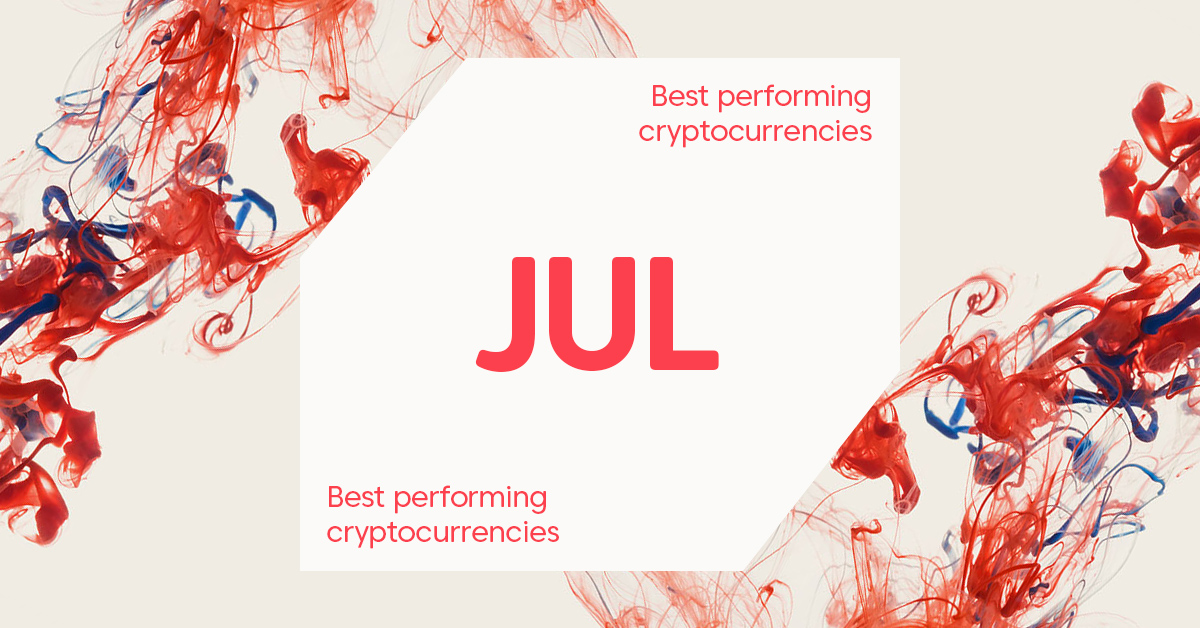 The crypto market is showing signs of recovery in July after a challenging second quarter, with the likes of Bitcoin and Ethereum recording double-digit gains in the last 30 days.

Read on to discover the best-performing crypto assets in July.

Below, you will find a list of the best performing cryptocurrencies in June.

Lido is a liquid staking protocol that allows users to stake tokens from different blockchain networks without any minimum deposit - while using their staked tokens for DeFi activities like yield farming concurrently.

Lido's native and governance token, LDO, is one of the leading performers as the crypto market gradually recovers. LDO has shown a price gain of over 300% in the month after significant announcements in the crypto space.

Firstly, Ethereum developers confirmed the transition to Proof of Stake - The Merge - will take place on September 19. Following the news, the price of LDO started increasing, considering it's one of the largest staking providers in ETH 2.0 with over 4.13 million staked Ether.

During the month, the volume of staked Ether on Lido increased as a successful Merge could boost staking profits and demand for LDO tokens.

ETC touched triple figures in price gain within the month alongside LDO. Much of this gain is also tied to the announcement made by Ethereum developers that the completion date of The Merge will be September 19th.

This is because as Ethereum switches to proof-of-stake, most of the mining hardware of current Ethereum miners wouldn't be relevant to the network. Since Ethereum Classic uses proof-of-work, it provides miners with an alternative to continue earning with their hardware.

The hashrate of Ethereum Classic is increasing as The Merge approaches with only a few marks of its all-time high. Additional triggers for the price gain can be attributed to crypto mining pool, Antpool's announcement of a $10 million funding for quality projects built on Ethereum Classic.

Curve Finance is a decentralised stablecoin exchange that hosts liquidity pools for several DeFi protocols. Considered the largest DEX by many, Curve has gradually outshined most DeFi exchanges through secured consistent incentives that attract liquidity providers to its ecosystem.

Curve's governance token, CRV, skyrocketed within the month above fellow leading DEXs like Uniswap and Compound. A potential reason for CRV's price surge is the announcement that Curve will be launching its own stablecoin. This will place Curve Finance alongside DeFi protocols like MakerDAO and Aave, which have also launched stablecoins.

Considering Curve hosts the largest stablecoin pools in the market, and is highly experienced in launching products, its stablecoin may topple down most established names in the web3 industry. Santiment, a blockchain analytics firm, reveals the skyrocketing CRV trading volume that followed the announcement.

Convex Finance is a DeFi protocol that aims to compound the earnings of liquidity providers on Curve by boosting their liquidity mining rewards. For example, staking your Curve LP tokens on Convex allows you to earn increased rewards on them, a share of trading on Curve, and its native token, CVX.

CVX joined its mother protocol, Curve, in recording eye-catching gains in the month. The price gain can also be attributed to the announcement of Curve's stablecoin launch. Due to Convex's close ties with Curve, the announcement triggered demand for CVX tokens.

Additionally, the high rate of users relocking their CVX tokens and increased deposit of CRV tokens contributed to a positive month for Convex Finance. Another potential cause for the CVX price rise was the heavy purchasing of CVX tokens made by Ethereum whales during the early days of the month.

Uniswap is a decentralised exchange that facilitates the trading of cryptocurrencies through its innovative AMM-powered liquidity pools. The founders of Uniswap are regarded as the inventor of the AMM technology that most decentralised protocols now use to power their activities.

In July, UNI showed good signs that its bearish trend may have ended after recording a price gain of over 50%. This is due to the increased accumulation of UNI tokens by whales in the month.

Wallets holding between 10,000 and one million UNI tokens have accumulated an additional 10.74 million tokens worth about $74.6 million at the time. Other factors for the rise may include Uniswap's announcement of the integration of NFT DEX, Sudoswap into its ecosystem. This comes off the back of its earlier acquisition of Genie, an NFT market aggregating tool.

Polygon is a proof of stake sidechain and the largest layer-2 scaling solution for Ethereum.

MATIC, the native token of Polygon, saw significant gains in the month amidst the crypto market recovery. Several integrations, announcements, and partnerships by Polygon within the month caused the price of MATIC to soar above $1.

The major catalyst for the rise comes from the announcement of its zkEVM - a zero-knowledge Ethereum virtual machine - which will significantly reduce transaction costs and increase the throughput of Ethereum.

Additional contributions to MATIC's price increase include Reddit's announcement of launching an NFT marketplace on the Polygon ecosystem, the release of The Nothing blockchain smartphone powered by Polygon, and Disney choosing Polygon as a participant in its accelerator program.

Quant is a layer-1 blockchain network that aims to solve the interoperability problem of decentralised networks through its operating system decentralised ledger technology - Overledger. Developers and businesses can launch multi-chain applications - MApps - on Overledger by holding a small portion of Quant token (QNT).

QNT joined the top earners of the month after skyrocketing from a lengthy bearish spell and recording significant price gains.

A possible reason for Quant's good month in the market may largely be because of its listing on Coinbase Pro towards the end of June. Another reason may be the recent midyear upgrade of its DLT system tagged Overledger 2.0.

Bitcoin Gold is a fork of Bitcoin that launched in 2017. The project's goal is to make mining more decentralised by switching to an Equihash algorithm.

Bitcoin Gold has been on an uptrend since the beginning of the year with over a 700% increase in price gains. July was an important month for the Bitcoin variant to resume its bullish trend after suffering from the market crash in May.

While it's hard to pinpoint the actual trigger for Bitcoin Gold's rising price, the project seems to be working on expanding its user base. It's rumoured that the project has appointed a Persian ambassador to expand its user base in Northern Asia around Pakistan, Iran, and Afghanistan.

Synthetix is a decentralised exchange that facilitates the trading of cryptocurrency derivatives, atomic swaps, and non-blockchain assets through highly liquid synths.

Its native token, SNX, recorded massive price gains during the month after suffering from the market crash in May and June.

The increase comes at the back of an announcement by Synthetix that its DAO has renewed its partnership with Jump Crypto. The Chicago trading firm, which is known for its liquidity provision service, will continue to provide liquidity across the listed assets on Synthetix. SNX was also among DeFi tokens heavily purchased by whales in July.

Aave is a decentralised lending and borrowing platform where users can lend their cryptocurrencies to earn rewards and take out crypto loans. Holders of its native token, AAVE, receive discounted fees when they use the platform and also have access to governance.

Aave joined its DeFi blue-chip counterparts in making the list of top earners as its native token, AAVE, increased by over 58% in July. The price gain can be attributed to the proposal of Aave Companies, a centralised foundation that backs Aave, to launch a USD-pegged stablecoin that will be called GHO.

GHO will be a "decentralised, collateral-backed stablecoin native to the Aave ecosystem," as stated on the project's Twitter handle. Other possible causes for the price surge of Aave include a $1 million treasury swap with Balancer, integration with Pocket network, and on-chain investment protocol, Sommelier.

*Market capitalisation and price percentage as of July 28th, 2022.


Which cryptocurrency is best to invest in 2022?

The best cryptocurrency to invest in is ultimately up to the trader and their risk appetite. There are many different options to choose from in the current market. Some investors prefer to focus on well-established currencies like Bitcoin and Ethereum, while others may be more interested in newer currencies with a lot of potential for growth in the years to come.


Why are there so many cryptocurrencies?

One of the reasons there are so many cryptocurrencies is because the crypto market has become a lot more mainstream in the past 5 years and acceptance of cryptocurrency is at an all time high.

It seems like every few months, another new cryptocurrency hits the market. With so many different options to choose from, it can be hard to understand what makes one digital currency unique from another. Some of these new coins are promising and innovative, while others seem to be little more than a thinly-veiled attempt at scamming unsuspecting investors. Conducting your own due diligence on cryptocurrency is crucial for all investors.


What cryptocurrencies can be traded with Axi?

With Axi, you can trade 11 cryptos as cryptocurrency CFDs, allowing you to speculate on whether to price will rise or fall. Some of the most popular include Bitcoin, Ethereum, Cardano and Dogecoin.

Keep up to date on the monthly trends of cryptocurrencies with Axi and start trading crypto CFDs today!