What is oil trading and how does it work?

Home / Markets to Trade / Commodities / Oil / What is oil trading 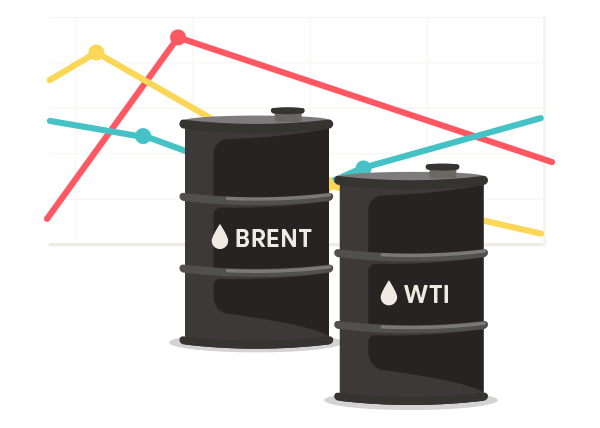 What is oil trading?

When you trade oil, you are buying and selling different assets based on one of the world's most widely used commodities. Most oil trading is done in the form of oil CFDs, including cash and futures, which means you are not buying the underlying asset (for example, a physical barrel of oil) but simply speculating on whether the price of oil in the open market is going to rise or fall.

How does oil trading work?

The oil market is made of two major components – the West Texas Intermediate and Brent Crude Oil – and each of these has different pricing. Because oil is a finite resource that is sensitive to supply and demand factors, prices can fluctuate significantly. This can result in the kind of volatile trading conditions often preferred by traders.

Within the WTI or Brent categories, there are many individual oil products you can trade, such as the spot oil market and the oil futures market CFDs. Each of these products has its own characteristics and it’s up to the trader to understand the unique features and risks, for example:

As an oil trader, it is important to understand the basic market dynamics and come up with a trading plan that incorporates all the most important factors driving the oil market, including risk, supply and demand, economic and political news, as well as using fundamental analysis and technical analysis. Learn more about how to trade oil.

What are the different types of crude oil?

While there are many different oil benchmarks, most of the prices are pegged to one of the primary benchmarks: WTI and Brent Crude.

Brent Crude oil: An estimated 60% of the world’s traded oil is priced off Brent, making it the most widely used marker and one of the major benchmarks for oil in the Middle East, Europe and Africa. Brent crude oil is obtained from four oil fields (Brent, Forties, Oseberg and Ekofisk) in the North Sea, which makes it more convenient to transport. Crude from this region is considered 'light' and 'sweet'.

WTI: WTI oil is the main benchmark for oil consumed in the USA and is extracted from wells in America. As these oil fields are landlocked, transporting WTI oil is relatively expensive compared to Brent. 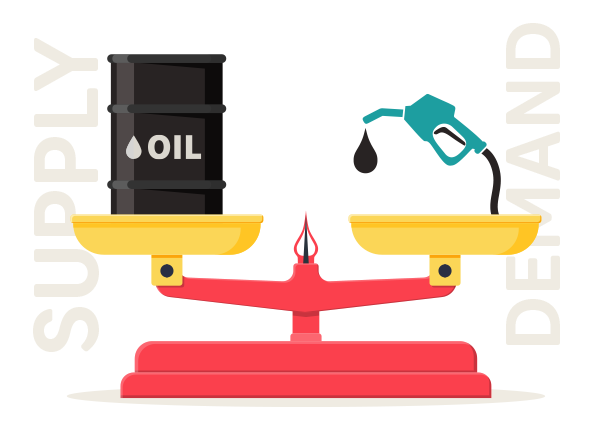 What is the difference between Brent and WTI oil?

Transportation: Because it is sourced from oil platforms at sea, Brent crude can be loaded onto ships and distributed around the world with relative ease and at a low cost. Because WTI oil comes from landlocked wells, transportation is more difficult and costly.

Geopolitics: Geopolitical factors – such as changing stance of the Organisation of the Petroleum Exporting Countries (OPEC) – have a significant impact on oil prices, which can widen the spread (price difference) between WTI and Brent.

What are the main factors that impact oil prices?

There are many factors that influence the price of the oil market. It’s important to stay up to date with economic news and market trends so that you have a greater understanding of how prices are affected.

State of the economy

When an economy is performing badly, there is less need for oil so the price drops. As an economy improves, oil demand recovers and prices increase.

Strength of US dollar

Oil is pegged to, and exchanged in, US dollars, meaning the value of the USD has a major impact on oil prices; a strengthening dollar can lower prices and a weak dollar sees them rise.

Oil prices are set on the futures market, meaning speculation about future events can impact prices. Traders should therefore be aware of news that might affect prices.

Growth in renewable energy production (i.e. solar and wind) may cause a decline in the depenence on oil, thereby causing prices to fall.

Events like natural disasters, war and geopolitical instability can impact oil prices. When output or supply is reduced due to an unforeseen 'shock' event, panic buying often leads to higher prices.

What are the advantages of trading oil?

There are many advantages of trading oil CFDs that make this market great for traders:

The margin deposit required to start futures trading can be as low as 10% of the total value of the contract.

Investing in oil as a hedging instrument can be a useful way to balance risk.

Oil offers traders another means to diversify their investment portfolio.

Oil can maintain its value and price even during times of high inflation.

Take advantage of flexible leverage to gain full exposure to a trade.

Choose from a variety of global markets to trade with Axi, using ultra competitive spreads & flexible leverage to trade your edge.

Why is crude oil valuable?

Crude oil, also known as “black gold”, is a raw material that is highly valued due to its wide use in production of everyday products such as plastic, gasoline, rubbers, synthetics and many more. Over many years, an increase in global population and quality of life has caused the consumption and demand of crude oil to increase. As a finite product with high demand, crude oil is therefore considered a valuable commodity.

What countries produce the most oil in the world?

What are some oil trading strategies?

Oil trading has a volatile nature and its price can be manipulated by the Organization of Petroleum Exporting Countries (OPEC) through production (supply) mechanisms. Therefore, there are two main strategies commonly used by traders to assess the oil trading markets: fundamental analysis and technical analysis.

Crude oil is the world's most commonly traded commodity and, due to it being highly liquid and volatile, there are many opportunities to trade the fluctuations to make a profit. How profitable trading crude oil can be depends on a large number of factors, but a good understanding of fundamental analysis is essential. To try oil trading and sharpen your skills, open a free demo account and access the library of educational trading resources provided by Axi.