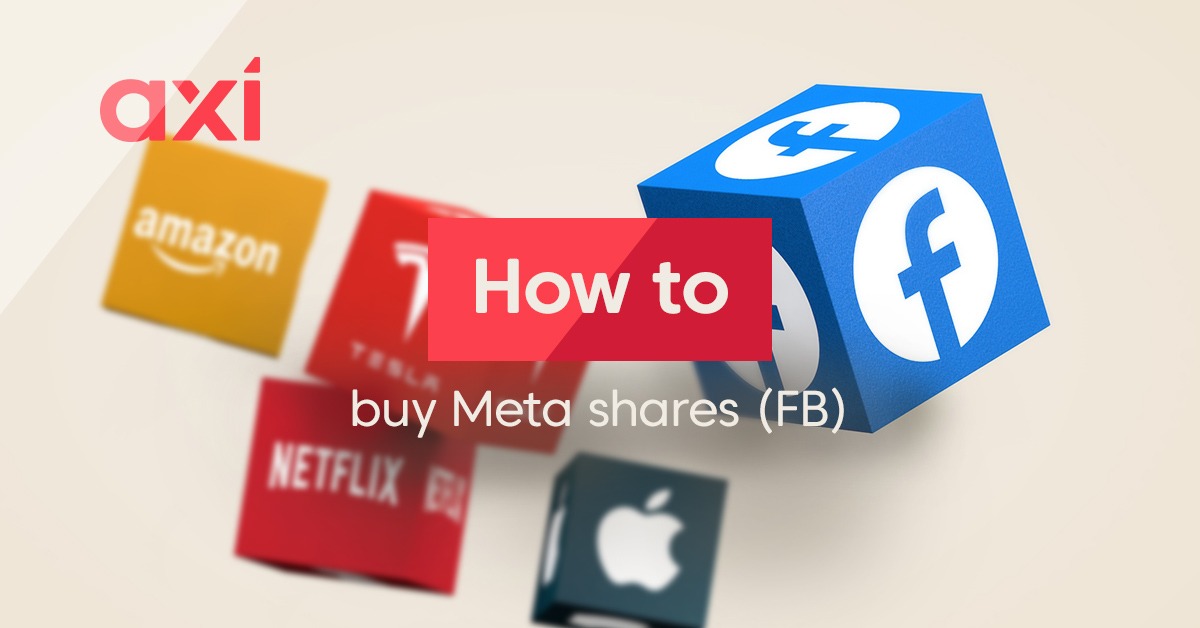 Meta Platforms Inc. - operating as "Meta" - and previously known as Facebook Inc. is a multinational technology company with headquarters in Menlo Park, California. Meta is one of the world's most valuable companies and derives the major of its revenue from advertising.

Looking to buy Meta shares? Or anticipating a decline in the share price and would like to profit from this opportunity using CFDs? In this guide, we will explore how traders can profit from price movements in the share price of Meta in either direction and provide traders with a better understanding of the Meta stock.

Facebook, WhatsApp, Instagram - those are all apps that need little introduction and that helped Meta achieve a position where it is dominating the social media landscape.

Meta was founded as FaceMash in 2003 and changed to Facebook in 2004. The social networking service was founded by Mark Zuckerberg and his college roommates. The idea behind it was to create a social network for Harvard students. The service quickly expanded to other U.S. universities and eventually became available to the general public.

Facebook saw rapid growth in its early days. By summer of 2004, the company was formally incorporated and had an office in Palo Alto, California. Facebook reached the milestone of having 100 million active users in 2008. Today, this number stands at almost 2 billion.

Facebook accepted its first outside investment in 2014, when venture capitalist Peter Thiel invested half a million Dollars in the company. In return, he gained 10% ownership and joined the company's board. Thiel sold 16.8 million Facebook shares when the company went public in 2012 and earned roughly $640 million from this. Thiel still held on to some shares after the IPO, but his FB holdings have greatly reduced in the past few years.

And how does the company make its money?

Meta made almost $86 billion in revenue during 2020 and the majority of that comes from advertising. The company is selling lucrative advertising space on its social media platforms.

Facebook surprised investors and consumers alike when they announced their rebranding to "Meta" in October 2021.

Facebook still exists as a brand, but the company itself has been renamed to Meta. Zuckerberg explained this move by saying that Meta is a better representation of where the company is heading to - a company that is known for more than just one product (Facebook).

Zuckerberg wants the metaverse to be the company's main product.

How to buy Meta shares

Depending on the type of trader, the trading platform can also be an important factor. Day traders who often use technical analysis might require an advanced platform with sophisticated charting tools. On the other hand, long-term investors could feel comfortable managing their portfolio simply from the broker's mobile app.

After a broker is chosen and opened a brokerage account the trader needs to decide what the budget is and how much  will be spending on the Meta shares. Share CFD trading gives traders the ability to use margin. This means traders only need to put up a small percentage of the full value of a trade in order to open the position.

Make sure to also consider technical analysis when reviewing the stock. To a beginner trader these concepts may be new. The links mentioned above and our free share CFDs trading course will be a good source to learn the basics and get a better understanding.

There are two direct ways of buying Meta shares:

Another way to trade Meta is through index trading. One such index is the NASDAQ 100, where Meta is a major constituent. The NASDAQ 100 is generally available as a Cash CFD or a Futures CFD. Cash CFDs have lower spreads and are more suitable for short-term traders, while Futures CFDs are popular amongst position traders as no swap fees will be charged.

How to invest in Meta

Buying Meta shares directly is not the only way to invest in the company. Many investors might already own Meta shares without being aware of it. Meta is a major constituent of the NASDAQ index, and as such, many popular ETFs also have exposure to it.

Some popular ETFs that include Meta shares in their holdings are:

Major mutual funds with notable exposure to Meta are:

For example, Meta shares make up 3.80% of holdings of the QQQ ETF, which is one of the largest and most popular ETFs worldwide with more than $200 billion USD under management. The ETF has delivered an annualised return of 23.10% over a 10 year period.

Meta's market cap has been rising steadily since its IPO, although there have been several larger setbacks. Meta share prices tumbled in 2018, taking its market cap from $600 billion to below $400 billion.

Meta shares recovered, only to crash again in March 2020. The recovery that followed took the market cap to over a trillion dollars in 2021, although it didn't manage to stay above the magical trillion dollar figure for too long.

How many shares of FB stock are there?

Meta has currently 2.37 billion shares outstanding. As of January 2022, the number of shares shorted stood at 24.11 million, which represents 0.87% of the shares outstanding. This is higher than some of the other tech giants such as Apple, Alphabet and Amazon.

What percentage of Meta is owned by insiders or institutions?

Currently, insiders are holding 0.68% of Meta's outstanding shares, while 80% are being held by institutions.

How has Meta stock performed?

Facebook Inc. had its IPO (initial public offering) in May 2012 and it went into the history books as one of the biggest tech IPOs ever, reaching a market cap of almost $100 billion. Facebook had an IPO price of $38 and closed its first trading day at $38.23 (after reaching an intraday high of $45).

The IPO received a lot of attention and was closely followed by traders and investors worldwide.
While the stock price of Meta certainly had its ups and downs over the time, the company performed incredibly well. Mark Zuckerberg is one of the richest people in the world today, and Facebook has created many more millionaires.

Meta shares reached a record high of $384 in 2021, while the 52-week low stands at $253.50.
Zuckerberg ensured that he retains control over the company by introducing a dual-class stock structure, similar to what Alphabet (Google) has in place. He still owns more than 50% of the voting shares, despite his actual ownership share having steadily declined over the past few years.

Does FB pay a dividend?

Dividend payments have become more common in the technology industry in the past few years. However, Meta remains to be one of the major tech giants that so far haven't paid out any dividends yet. Instead, the company continues to reinvest the cash back into the business.

Will Meta ever start paying out dividends? At some point, Meta will mature and might reconsider its strategy, as did Apple for example. There are no indications though that this will occur in the near future, so investors will continue looking at it as a growth stock rather than a dividend stock.

Can Meta shares be traded pre-market and after-hours?

Meta is listed on the NASDAQ exchange and the regular trading hours are 9:30AM to 4PM.

Is it a good time to buy Meta stock?

Meta has been under pressure in recent weeks for a variety of reasons. Market sentiment has turned sour, and the technology sector suffered the most from this. Meta was also facing revelations from a whistle-blower and disappointed investors with their Q3 results.

Investors will now be curious to hear what plans Mark Zuckerberg has. Meta plans to focus on building the metaverse - a virtual space that can be accessed via different devices.

The company also invested heavily in its VR unit Reality Labs, and while most investors will be happy that the company is taking steps to diversify its income streams, it could drag on overall revenues for a while. So, while the metaverse remains an interesting long-term goal, the market will focus more on how Facebook's advertising cash cow is coping.

Technical Analysis for FB by TradingView

Facebook has been trending lower since September and the key level to watch in the short-term is the psychological support level at $300. A clear break below this level and the lower trendline could pave the way for a continuation of the correction towards $245. In the meantime, FB bulls will be aiming for a breakout above the upper trendline and $352 resistance. 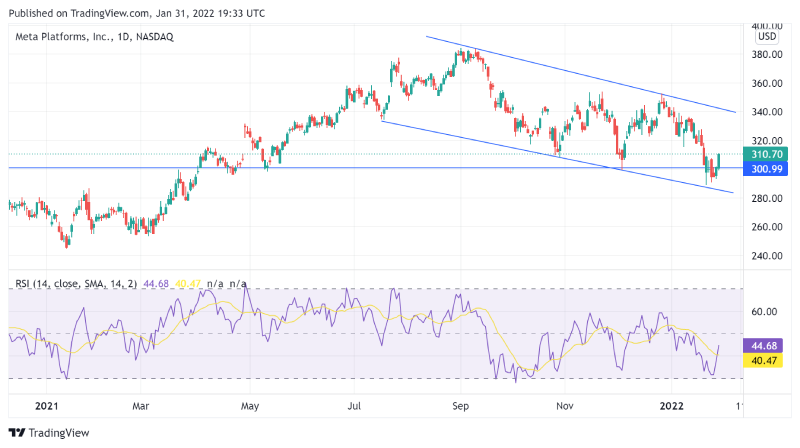 Sign up for a live trading account with Axi and start trading FB shares today. Go long or short on Meta commission-free!

Discover the latest on AMZN shares including market cap, stock price, trading hours and how to buy Amazon stock.

How to buy Google shares (GOOG)

Discover the latest on GOOG shares including market cap, stock price, trading hours and how to buy the stock.