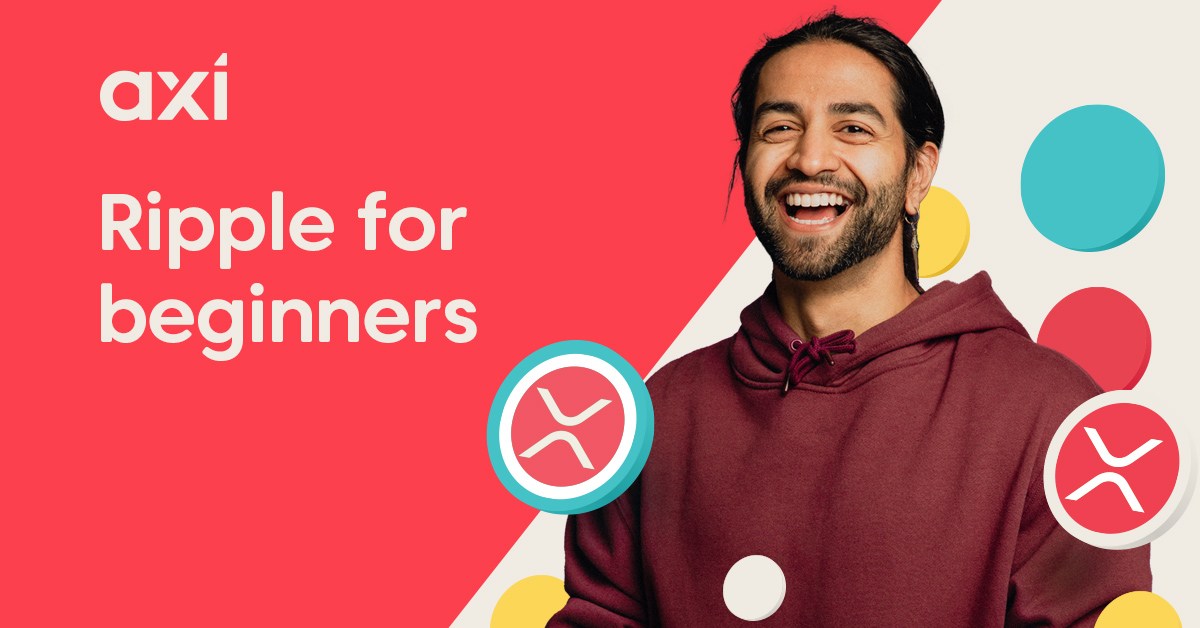 XRP is one of the largest cryptocurrencies in the world, sitting in the top ten crypto assets by market capitalisation for over five years.

XRP is one of the largest cryptocurrencies in the world, sitting in the top ten crypto assets by market capitalisation for over five years now.

In this beginner’s guide, readers will learn everythingneed to know about Ripple and trading XRP crypto CFDs.

What is XRP and how does it work?

XRP is the native cryptocurrency of the XRP Ledger, which facilitates secure payment services across the globe with high throughput and low transaction fees. As opposed to traditional money transfer systems like SWIFT, which is time-consuming and charges high fees, the Ripple ecosystem settles transactions using XRP tokens and its RippleNet.

XRP serves as a bridge currency to other currencies in the Ripple ecosystem via the network's gateway feature. Interestingly, both fiat currencies and cryptocurrencies can be transferred on the network.

For example, if Alice wants AUD as payment for services rendered to Bob, Bob can pay Alice without owning any AUD. He can send the money to his gateway using US dollars, and Alice will receive AUD at her end.

Unlike most cryptocurrency networks that utilise either proof of work (PoW) or proof of stake (PoS) consensus mechanisms, XRP validates transactions via the XRP Ledger Consensus Protocol. Anyone can become a validator in the network by downloading and running the validation software. However, the network has a unique node list of 35 trusted validators chosen by Ripple, who are responsible for validating transactions in the network. These validators must reach a consensus on each transaction before it can be successful.

As opposed to producing blocks, the XRP Ledger produces ledgers that are cryptographically linked to each other. Each ledger is confirmed between 3 - 5 seconds which is by far higher than that of Bitcoin's block time of 10 minutes. XRP validators don’t receive any financial incentive like newly minted tokens for their services on the network.

Also, XRP has a maximum supply capped at 100 billion units that were pre-mined before launch.

When was XRP created?

Early developments for XRP can be traced back to 2004 by software developer Ryan Fugger. The network later went through a series of development onboarding names like Arthur Britto, Jed McCaleb, and David Schwartz before it was released in 2012, with Chris Larsen and Jed McCaleb as co-founders.

Ripple, the company behind the cryptocurrency XRP, also went through different name changes during this time. Initially called Opencoin before it was renamed to Ripple Labs in 2015, and later to Ripple.

What's the difference between Ripple (the company) and XRP?

Considering the frequent name change of the company in the past years, it's no surprise people often confuse the name for this cryptocurrency.

Many use both XRP and Ripple interchangeably to refer to the digital currency. However, Ripple (the company) has said that it wants its cryptocurrency to be referred to only as XRP and no longer as Ripple or Ripples.

RippleNet is a payment settlement network that processes the transfer of money globally. Ripple is the name of the company behind the network. XRP, on the other hand, is a cryptocurrency that serves as the native token of the Ripple network. What ether is to Ethereum, XRP is to Ripple.

Apart from its cryptocurrency, Ripple is home to several solutions, including RippleNet and RippleX.

RippleNet allows financial institutions like banks to transfer money all over the world simply and transparently. This shows Ripple is expanding its solutions beyond just the crypto market.

But the common ground for all of these solutions is that they are powered by the XRP token. In essence, Ripple is an ecosystem of digital payment services, while XRP is the native currency enabling these services to function.

How is the coin supply of XRP managed?

XRP has a capped maximum supply of 100 billion tokens that was pre-mined before its launch. Of this supply, 80 billion XRP were initially allocated to Ripple.

Currently, about 55 billion XRP tokens are held by the Ripple company in escrow accounts, leaving just 45 billion tokens in circulation for end users.

This lion share held by Ripple and its former executives has plagued XRP holders for some time. Both present and former executives often dump their holdings, resulting in XRP price drops. In an interview, Ripple CEO even said that Ripple was only profitable because it sells its XRP into the open market.

To address this issue, Ripple is conducting a buyback program to support healthy markets and its new Line of Credit initiative. Ripple revealed in a report that the company has already purchased $46 million worth of XRP tokens from the market.

As one of the early cryptocurrencies after Bitcoin, XRP has had quite significant price movements. In this section, we cover notable price movements XRP has made since its launch.

2013: XRP's first few years were fairly quiet, considering a very high percentage of the world were still getting to properly understand cryptocurrencies. At this time, XRP was trading for around $0.005874. The digital currency remained below $0.1 for the next few years until the next breakthrough.

2017: In the second quarter of 2017, from trading below $0.1, XRP sprung up to a price around $0.40. Much of this growth was fueled by headlines of Ripple’s onboarding of financial institutions on its payment platform. Later in the year, XRP rode the crypto bull market as it soared from just $0.20 on December 8 to its all-time high of $3.84 on January 4, 2018. This is still the all-time high of XRP as the currency struggles to reach former heights.

2018: XRP crashed alongside the entire crypto market, from an all-time high of $3.84 to around $0.25. The price experienced a few corrections, but that still didn't change its downward trajectory. The bear market continued for XRP until 2020.

2020: After losing some of the little gains accumulated in 2019 to the Covid-19 outbreak, the cryptocurrency was trading around $0.15 as of March. In the second half of the year, during the early stages of the bull market, XRP touched $0.75 in November. The SEC lawsuit against Ripple later quenched any hope of reaching its former heights, sending the cryptocurrency plummeting to around $0.30 in December.

2021: While several cryptocurrencies were creating new all-time highs, XRP made a significant price increase to around the mark of $1.96. However, XRP crashed alongside the crypto market to a low of $0.55. While other cryptocurrencies like BTC, ETH, BNB, and SOL recovered and went to create new all-time highs, XRP couldn't find its speed. It later ended the year at a price of about $0.83, still facing issues with US financial regulators.

What is the market capitalisation of XRP?

The market capitalisation of XRP at the time of writing is $35,515,795,588, placing it at number 8 among the largest cryptocurrencies in the world.

But it’s important to note that the company still holds a substantial amount of XRP that could eventually end up in the circulating supply, affecting the price and market capitalisation significantly.

Where can users view XRP transactions?

XRP transactions are publicly verifiable as it runs on an open-source ledger.

Users can view the records of all XRP transactions using block explorers like XRP charts. While users want to view a specific transaction, copy the transaction ID, and paste it into the search bar of the block explorer.

XRP trading is relatively straightforward if the user knows the right steps to take. Since it's one of the top cryptocurrencies in the market, tools are readily available to ensure users can trade and store XRP.

Here are simple guidelines to get start trade XRP.

How to trade XRP

XRP has constantly shown several trading opportunities since its inception in the market, considering its frequent price swings. XRP is actively traded on most cryptocurrency exchanges. Traders can also trade XRP with Axi using crypto CFDs, allowing users to speculate on both price increases and decreases.

Trade XRP with the steps below:

How to buy XRP

Considering the popularity of XRP, many crypto exchanges have listed the digital currency on their platforms. Hence, users can easily buy XRP by opening an account with a crypto exchange, using an XRP wallet, and having fiat currency for your purchase.

Below the steps are outlined:

How to Invest in XRP

XRP has been in the market for quite a long time, presenting several investment opportunities for investors.

Safely invest in XRP by following the steps above. But make sure to store the XRP in a secure cryptocurrency wallet, such as a hardware wallet, to which users hold the private keys.

How to store XRP

XRP, like most cryptocurrencies, is stored in a digital wallet where owners can use it for different purposes. Different wallet options are available for storage, including software wallets, paper wallets, hardware wallets, etc.

One common rule with these wallets is that the wallet must have a minimum of 20 XRP to be activated. Only crypto exchange wallets are an exception to this rule. Users can store XRP with these steps:

Discover the advantages and disadvantages of the XRP cryptocurrency below:

What price is XRP expected to reach

Many lofty expectations have been made for XRP in the past. But cryptocurrencies often defy expectations with their frequent and unexpected price fluctuations. A major talking point in price predictions for XRP is the lawsuit against Ripple from the SEC.

In the case of a favourable ruling for Ripple, XRP could rally to new all-time highs. Conversely, if the legal bout results in the conclusion that XRP is an illegally sold unregistered security, the value of the cryptocurrency would plummet.

Before taking any investment decisions, ensure to do a diligent research and keep in mind the high volatility of cryptocurrencies.

We hope that this guide will help traders on the journey to buying, owning, and trading XRP. To start trading XRP CFDs with Axi today, click here.