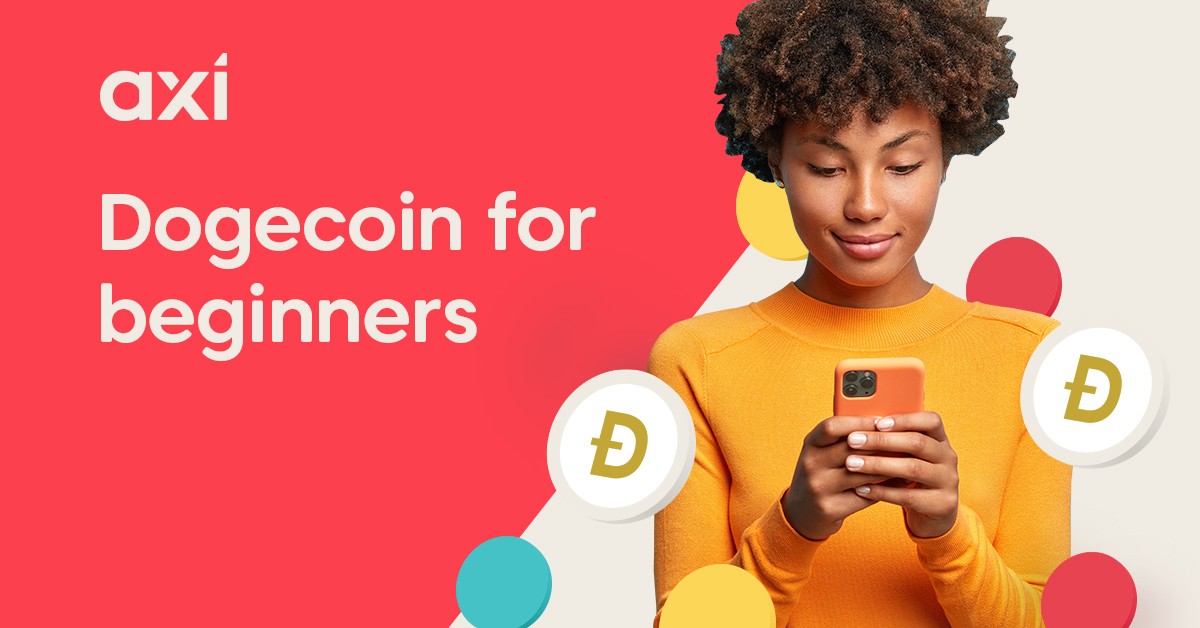 Dogecoin is a highly popular “meme coin” that has even attracted the likes of Elon Musk to become a fan.

Dogecoin is a cryptocurrency that was created in 2013 as a joke but has since gained popularity and value due to its fast transaction speeds and massive community following. Despite it being one of the oldest and most popular altcoins available, Dogecoin remains a mystery to many new traders, on whether or not it’s a pure memecoin or an investment opportunity.

Read on to learn everything traders need to know to get started with trading Dogecoin, from how the meme-powered cryptocurrency became so popular to how someone can buy it.

What is Dogecoin and how does it work?

Dogecoin (DOGE) is a cryptocurrency like Bitcoin that can be used for secure online payments. Originally meant to be a joke based on a popular internet meme featuring a Japanese Shiba Inu dog, Dogecoin has grown to be one of the largest cryptocurrencies by market capitalisation.

The cryptocurrency is a fork of Luckycoin and Litecoin. The developers just made a few tweaks to the code while maintaining its consensus process and scrypt algorithm.

In the Dogecoin network, transactions are gathered together in a block which is distributed to miners for validation via a proof of work (PoW) consensus process. The Dogecoin network is open-source, allowing anyone to implement new updates and features to Dogecoin as long as a larger percentage of nodes in the network adopt them.

Unlike Bitcoin, which has a disinflationary coin supply management mechanism, Dogecoin is created to be inflationary. Its supply has no lifetime cap, with 5 billion DOGE entering circulation each year.

Over the years, DOGE has been used for several purposes, including online tipping, contributions to charity, and online payments.

Why has Dogecoin become so popular in recent years?

Dogecoin's popularity comes from a thriving community dedicated to keeping the fun of a meme-based cryptocurrency alive.

However, most of the buzz around Dogecoin came in early 2021, following several supportive tweets from Tesla's CEO, Elon Musk. Some even refer to Elon Musk as the "Dogefather'' due to the significant price movements that usually follow after Musk tweets about the digital currency.

More recently, on January 14, 2022, Tesla started accepting Dogecoin as payment for some of its merchandise. Other factors contributing to Dogecoin's popularity include a sponsorship deal with Premier League football club Watford FC and endorsements from big names like Snoop Dogg, Gene Simmons, and Dallas Mavericks’ owner Mark Cuban. Merchandise and tickets of the NBA club can even be bought with Dogecoin as Cuban has said the club is the top Dogecoin merchant.

When was Dogecoin created?

In 2013, Adobe Inc. software engineer Jackson Palmer, in an attempt to poke fun at cryptocurrencies, initially tweeted in a now-deleted tweet about a coin based on the internet meme, Doge. In November that year, he bought the Dogecoin.com domain and added an image that featured a Shiba Inu dog with Comic Sans.

Another software engineer, Billy Markus, came across the website and reached out to Palmer. After Palmer wrote back, the collaboration was formed and the result was Dogecoin. On December 6, 2013, Dogecoin was launched with a community of Reddit users.

Dogecoin was invented by software engineers Jackson Palmer and Billy Markus in 2013. The cryptocurrency is a fork of Luckycoin and Litecoin with a few alterations.

Both Palmer and Markus have stated that they are no longer involved with the project. Palmer has left the cryptocurrency industry entirely, while Billy Markus still holds some Dogecoin after selling off all his holdings earlier in 2015 to purchase a Honda Civic.

How does Dogecoin mining work?

Like many early cryptocurrencies, Dogecoin uses a proof of work (PoW) consensus mechanism for confirming transactions and keeping its network secure. Miners validate transactions and arrange them in a block to ensure they tally with previous records on the blockchain.

Miners are rewarded by the network for their duties with new DOGE. The current block reward for Dogecoin is 10,000 DOGE, which is much higher than that of most cryptocurrencies. The recipient of each block reward is based on who successfully validates the block and solves a cryptographic puzzle before other miners do. The block time for Dogecoin is just one minute which is faster than Bitcoin's block time of ten minutes. This is in part because of the hashing algorithm, Scrypt, employed by Dogecoin.

In 2015, the developers of Dogecoin implemented a merge mining process that allows for Dogecoin and Litecoin to be mined simultaneously with the same 'work' - since Dogecoin is a fork of Litecoin's code.

Currently, all Litecoin miners are mining Dogecoin as well, seeing it's essentially gaining more for contributing the same work. Hence, keeping the Dogecoin network secure with their mining power in the process. Dogecoin can be mined at home with GPUs/CPUs or using dedicated mining equipment made specifically for the scrypt algorithm.

In the crypto market, meme coins have shown some of the highest volatility, highlighted also by Dogecoin’s substantial price swings. While many investors only became aware of Dogecoin during its momentous rise in 2021, the cryptocurrency has been in the market for quite a while.

Let’s take a look at the meme coin’s most notable price movements.

2014: After suffering from a hack on December 25, 2013, which saw millions of coins stolen, DOGE gained momentum in January, briefly surpassing the trading volume of the entire crypto market. The DOGE community even raised $50,000 to help send the Jamaican Bobsled team to the Sochi Winter Olympics. The rest of the year was fairly quiet as interest in the coin dropped, sending its price to $0.0001882 as of December 14.

2015: Dogecoin co-founder Jackson Palmer opted out of the project and the entire crypto community. Subsequently, Dogecoin was fairly quiet as the project looked abandoned by developers.

2017: During the crypto market rise of 2017, DOGE skyrocketed with the rest of the other cryptocurrencies in the market to $0.0007463 in April. It experienced a few corrections but was still riding the bull until the year ended.

2021: This was the year for Dogecoin. In January, its price soared over 800% following the GameStop short squeeze and tweets of Elon Musk. The thrilling price rise continued for the coin gaining far more than any other cryptocurrency in the market as it reached its all-time high of $0.7376 on May 8, with a market capitalisation of about $85 billion. The price later crashed from this peak as the entire crypto market went bearish. When other cryptocurrencies recovered, DOGE could no longer find its momentum as it later ended the year at around $0.175.

What is the market capitalisation of Dogecoin?

The market capitalisation of Dogecoin rose from below $2 billion to about $85 billion in May 2021, following a significant increase in the coin’s price thanks to Elon Musk’s public support.

However, DOGE has dropped down the list since then to a market capitalisation of $19.98 billion at the time of writing, making it the 11th largest cryptocurrency in the world.

Where can I view Dogecoin transactions?

Although Dogecoin started as a meme, it’s still a cryptocurrency that lives on a decentralised blockchain. Traders can view any Dogecoin transactions without compromising the identity of users using a blockchain explorer.

All transactions that have ever occurred in the network are publicly verifiable. If traders intend to view or track a particular transaction, copy and paste the transaction ID on an explorer or use the wallet address.

So let’s take a look at how to trade, buy, and invest in Elon Musk’s favourite cryptocurrency.

How to trade Dogecoin

Dogecoin trading allows traders to speculate on price changes in Dogecoin. And with the high volatility of meme tokens, investors are presented with several trading opportunities.

DOGE can be traded on crypto exchanges where traders can buy/sell digital assets or crypto brokerages like Axi using crypto CFDs that enable traders to speculate on both rising and falling prices.

How to invest in Dogecoin

Although Dogecoin started as a meme, it has since grown into one of the top cryptocurrencies in the market.

Considering the volatile price movements, Dogecoin has experienced, especially following tweets by Tesla CEO Elon Musk, the digital currency presents several potential investing opportunities. Traders can invest in Dogecoin by using the steps below to buy the currency and then securely store it in the wallet of their choice.

How to buy Dogecoin

Like other cryptocurrencies, traders will need to have an account with a crypto exchange, a Dogecoin wallet, and money to make a purchase. Then, follow these steps:

How to store Dogecoin

Dogecoin is stored in a cryptocurrency wallet, where it can be accessed at any time. The meme coin can be stored in hardware wallets, software wallets, web wallets, paper wallets, and wallets offered on exchanges. With the following steps, traders can easily store the Dogecoin:

Discover the advantages and disadvantages of Dogecoin below:

What price is Dogecoin expected to reach?

Considering the highly volatile nature of meme coins in the already volatile world of cryptocurrencies, coupled with random tweets from Elon Musk, it's quite difficult to predict the future value of Dogecoin.

Some crypto prediction platforms, however, have shared their opinions on the future of the mother memes.

Remember that predictions are only predictions. Make sure to conduct some researches before making an investment in any cryptocurrency.

We hope that this beginner’s guide will help traders on the journey to buying, holding, and trading Dogecoin. Start trading DOGE CFDs with Axi today, click here.