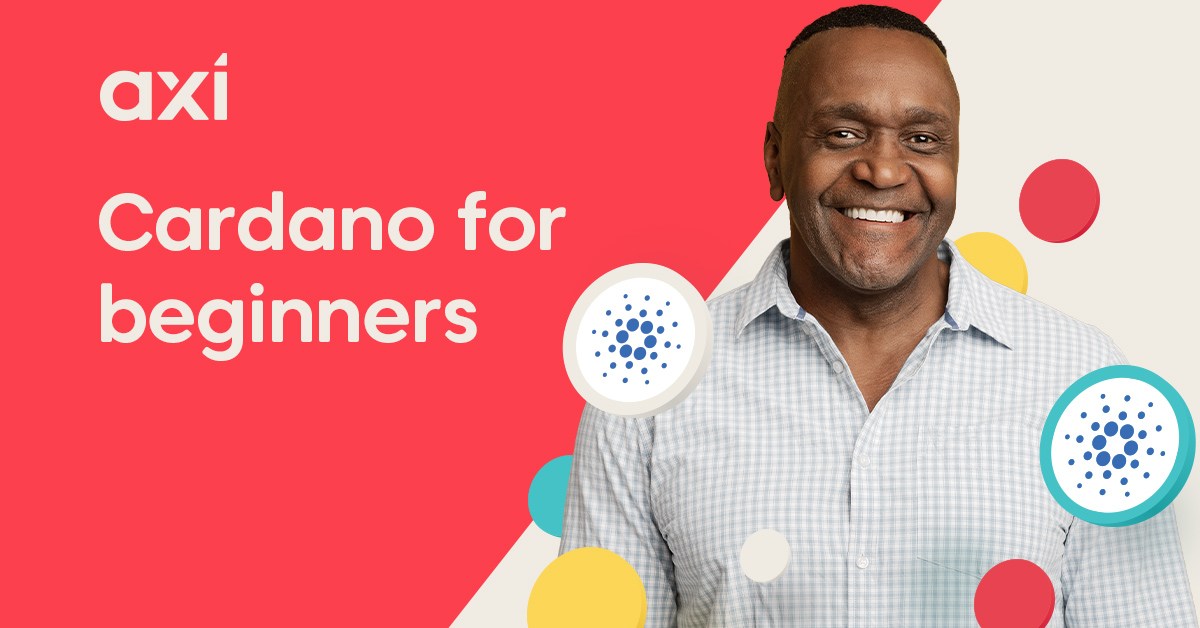 Cardano has been making waves in the crypto markets since its cryptocurrency, ADA, moved into the top ten largest crypto assets by market capitalisation.

Cardano is a decentralised public blockchain and cryptocurrency project that launched in September of 2017. The project is led by Charles Hoskinson, one of the co-founders of Ethereum. Cardano is unique in that it uses a scientific philosophy and peer-review to build its blockchain. This gives the platform a strong foundation upon which to grow.

Read on to learn everything needs to know to get started with trading Cardano, from how the blockchain network works to its historical price action and more.

What is Cardano and how does it work?

Cardano is a blockchain network that allows for the creation of smart contracts and decentralised applications. Its native token, ADA, powers the Cardano network in the same way that, for example, ETH powers Ethereum.

Cardano is often dubbed as a potential “Ethereum killer” as its framework solves issues of scalability and sustainability that currently plague the Ethereum network and many other blockchain networks.

Cardano's selling points come from the use of peer-reviewed research methods and mathematical evidence in the development of its network. While Cardano is still a work in progress, the blockchain network has a clear and strategic roadmap. Outlined in the network’s different development phases, Cardano could become a leading blockchain if the team behind the network can deliver on its mission.

Cardano also distinguishes itself from most chains by building with regulations in mind.

The framework of the Cardano network is split into two layers - the settlement layer and the computational layer.

The settlement layer records and tracks all transactions in the Cardano network. For example, if users sends ADA from the wallet to a friend’s wallet, this will take place on the network’s settlement layer.

Two of the most popular use cases of the Cardano network are for supply chain tracking and identity management.

Why has Cardano become so popular in recent years?

Cardano's popularity comes from reaching several development milestones and from the technical aspects of the network and the coins tokenomics.

The platform has been able to successfully implement three development eras outlined when it launched. And with each era unlocking new features for the network, investors and developers alike pay close attention to the cryptocurrency. The recent Alonzo hard fork upgrade saw many developers onboard to the platform and a spike in the price of ADA.

Another reason for Cardano's popularity can be traced to the design of its Ouroborus Proof-of-Stake (PoS) consensus mechanism. Cardano is the first top cryptocurrency network to successfully implement the proof-of-stake consensus mechanism with additional mathematical security.

When was Cardano created?

Developments for Cardano began in 2015 as its developers started exploring different ways to improve cryptocurrencies. Cardano was officially launched in September 2017, following a highly successful ICO that raised over $62 million for the development of the new chain.

Cardano was invented by Ethereum co-founder Charles Hoskinson as an attempt to solve many of the problems the Ethereum network is facing today.

Oversight of the protocol is shared among the Cardano Foundation, IOHK, and EMURGO.

How does the Cardano network validate transactions?

The Cardano network uses a specialised type of proof-of-stake (PoS) consensus mechanism known as Ouroborus. It’s based on cryptography, combinatorics, and game theory for validating transactions and reaching consensus on its network. Ouroborus splits chains into epochs that are further subdivided into slots, which are fixed periods.

Slot leaders, which are mostly represented by staking pools, are responsible for confirming transactions and adding new blocks to the network. The network, in turn, rewards these slot leaders with a specific amount of ADA. The amount of ADA held by a staking pool determines its chances of being selected to be a slot leader. Hence, holders usually pool their tokens together in a staking pool to increase their chances of being selected and earning rewards. Rewards are distributed based on the share of the pool a user contributes.

Staking pools means users don't need to be online 24/7 as the pool takes on this responsibility enabling users to contribute to the security of the network while offline.

Additionally, the Cardano Daedalus wallet enables users to run a full node, and it's the only means available for users to stake in the network.

Cardano's success as one of the top smart contracts platforms in the crypto market has seen the network’s cryptocurrency increase in value since its launch. However, ADA’s price hasn’t moved in a straight line. Several bull and bear markets have affected its price movements.

2017: In the heat of the 2017 crypto market boom, ADA went live, trading at $0.02 after conducting a highly successful ICO in the previous year. After a small price correction to $0.017 in November, ADA skyrocketed, with the entire crypto market ending the year with about $10 billion market capitalisation and a price of $0.71.

2018: The bullish season spanned into January as ADA recorded an all-time high of $1.33, sending its market capitalisation briefly to $33 billion. During the later months of the year, ADA crashed, following the deep correction of the crypto market. In May, ADA showed signs of recovery when Charles Hoskinson announced a partnership with the government of Ethiopia to develop blockchain solutions for the country's sector. Following the news, ADA rose to around $0.35.

2020: Like other cryptocurrencies in the market, the price of ADA crashed significantly in the first quarter following the global effect of the COVID-19 pandemic. The price later saw an 85% increase within ten days in July, after the Shelly Mainnet upgrade.

2021: 2021 can be referred to as one of the most bullish years for the entire crypto market. ADA recorded over 700% in price appreciation before experiencing some bumps along the way. The first quarter was mostly bullish as ADA broke its previous all-time high before crashing with the rest of the crypto market in late May. In August, ADA began another bullish momentum as it reached a new all-time high of $3.099 in September, following the announcement of the Alonzo hard fork. The price later crashed again, ending the year at an average of $1.433.

What is the market capitalisation of Cardano?

Cardano’s market capitalisation is $40,192,309,997 at the time of writing. ADA currently ranks as the 6th largest cryptocurrency in the world and is one of the most popular altcoins.

Where can I view Cardano transactions?

Although Cardano came with several innovative features, it also utilises a public distributed blockchain for recording and conducting transactions. Users can view both your transactions and other transactions that have occurred on the network over time with a Cardano block explorer.

However, users can't view the original identity or other personal on-chain data of a person via a block explorer. This is why the Cardano network is considered highly secure and transparent.

To view a particular transaction on the Cardano network, just copy and paste the transaction ID on a block explorer or use the public address of the wallet.

Over the years, Cardano has become very popular among crypto traders and investors. Let’s take a look at how to take part in the action.

How to trade Cardano (ADA)

Cardano trading allows traders to speculate on the price movements of Cardano. And since ADA has shown high volatility in the past, the cryptocurrency provides good trading opportunities.

ADA can be traded on cryptocurrency exchanges where can buy/sell and store tokens or on online brokerages like Axi using crypto CFDs that offer the capacity to speculate on both rising and falling markets.

The steps to start trading ADA are as follows:

How to invest in Cardano (ADA)

Considering Cardano holds a spot among the largest cryptocurrencies in the world, it has caught the interest of several crypto investors. Investors can invest in ADA by following the steps above to buy the cryptocurrency either for active trading or long-term holding.

Better still, investors could buy and stake your ADA tokens to receive block rewards (in the form of new ADA tokens) in addition to a potential price appreciation.

How to buy Cardano (ADA)

Investors can purchase ADA on most crypto exchanges considering its popularity. However, investors will need to have an account with the exchange, an ADA wallet, and money that will use to make the purchase. With the steps below, traders are good to go.

How to store Cardano

After purchasing cryptocurrencies from an exchange, the next step is to choose a cryptocurrency wallet where users can access their coins at any time.

ADA can be stored in hardware wallets, software wallets, web wallets, paper wallets, and wallets offered by cryptocurrency exchanges. The type of wallet that users use is often dependent on your investment strategy or purpose.

Cardano have built their own hot wallets for their users to store ADA safely, Daedalus and Yoroi.

Discover the advantages and disadvantages of Cardano below:

What price is Cardano expected to reach?

In the early days of Cardano, some thought it could emerge as an 'Ethereum killer' due to its low transaction fees and high transaction throughput. Whether Cardano will live up to that expectation is yet to be seen. However, it won’t be easy considering the sheer number of other next-generation smart contract platforms in the market.

A forecast from Wallet Investor predicts a significant price rise in the future, with an increase to $2.79 in 2023 and $9.22 in five years. Furthermore, a CoinDesk report suggested that ADA can surpass its all-time high to reach $5.17 if ecological concerns grow in the crypto space.

Cryptocurrencies often show unexpected price gain and loss. Hence, it’s essentially impossible to accurately predict where a crypto asset will move to in the near (or distant) future. However, ADA may show a significant price increase if the team behind the blockchain manages to attract more Web 3.0 applications and continues to deliver on its development roadmap.

Regardless of any ADA price predictions read online,please always carry out with extensive research on Cardano before going long or short on the cryptocurrency.

We hope that this beginner’s guide will help traders on the journey of buying, owning, and trading ADA. To start trading Cardano CFDs with Axi today, click here.