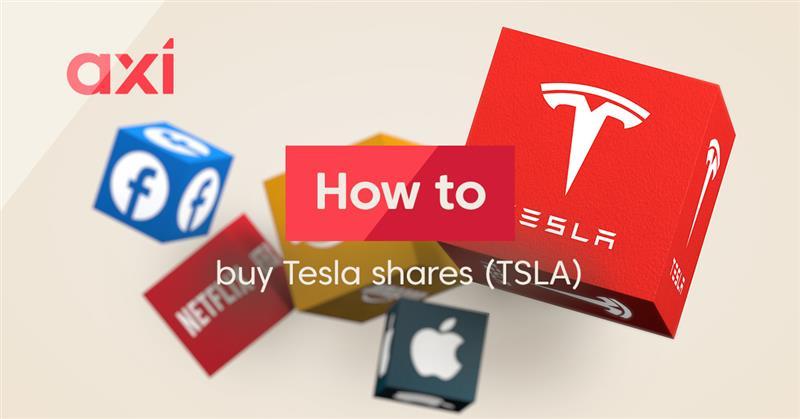 Tesla, Inc. (TSLA) is an American multinational corporation that designs, manufactures, and sells luxury electric cars and electric vehicle powertrain components. The company's stock is publicly traded on the NASDAQ exchange under the ticker symbol TSLA.

In this guide, we will explore how to profit from price movements in the share price of Tesla in either direction and get a better understanding of the TSLA stock.

Tesla (TSLA) is an American automotive and energy storage company, founded in 2003 by Martin Eberhard and Marc Tarpenning. The current headquarters is located in Austin, Texas. In 2020, the company had 70,757 full-time employees and their CEO is Elon Musk, who is also a major shareholder and the world's richest person.

Tesla currently has four car models on the market:

While Tesla is famous for its electric cars, it is also active in the solar energy sector with its products Powerwall, Powerpack and Solar Roof. The company also built a complex called the "Tesla Gigafactory" in Nevada. It is producing electric motors and battery packs. According to the company, it is the highest-volume battery plant in the world.

Depending on the type of trader, the trading platform can also be an important factor. Day traders who often use technical analysis might require an advanced platform with sophisticated charting tools. On the other hand, long-term investors could feel comfortable managing their portfolio simply from the broker's mobile app.

Step 2: Decide how much to invest

After chosen a broker, the next is to decide the budget and how much will be spending on the TSLA shares. Trading share CFDs gives traders the ability to use margin. This means traders only need to put up a small percentage of the full value of a trade in order to open the position.

Before investing money into any stock it's wise to do some research into the company's financials, future outlook and current performance.

Make sure to also consider technical analysis when reviewing the stock. To a beginner trader, these concepts may be new. The links mentioned above and our free share CFDs trading course will be a good source to learn the basics and get a better understanding.

Step 4: Choose how to invest

There are two direct ways of buying Tesla shares:

Another way to trade Tesla is through index trading. One such index is the NASDAQ 100, where Tesla is a major constituent. The NASDAQ 100 is generally available as a Cash CFD or a Futures CFD. Cash CFDs have lower spreads and are more suitable for short-term traders, while Futures CFDs are popular amongst position traders as no daily swap fees are charged.

Futures CFDs are subject to a rollover. A rollover is when a trader moves their position from the front-month contract (close to the expiration date) to another contract date in the future, to avoid the costs or obligations associated with the settlement of the contracts. Contract rollovers are profit neutral.

How to invest in Tesla

Buying Tesla shares directly is not the only way to invest in the company. Many investors might already own Tesla shares without being aware of it. Tesla is a major constituent of the NASDAQ index, and as such, many popular ETFs also have exposure to it.

Some popular ETFs that include Tesla shares in their holdings are:

Major mutual funds with notable exposure to Tesla are:

For example, Tesla shares make up 4.52% of holdings of the QQQ ETF, which is one of the largest and most popular ETFs worldwide with more than $200 billion USD under management. The ETF has delivered an annualized return of 23.10% over a 10 year period.

How many shares of TSLA stock are there?

Has TSLA ever split it's stock?

Tesla completed a five-for-one stock split in August 2020. It made shares affordable for retail investors and the Tesla share price saw a large jump after the stock split took effect. There are rumors that Tesla could announce another stock split in the near future as the share price is now again above $1,000, but whether this will really occur remains to be seen.

How has Tesla stock performed?

Keep in mind that Tesla had a stock split in 2020, so investors enjoyed a far larger return than it might appear on the first look. In fact, if someone bought Tesla shares ten years ago and held on, he would have enjoyed an impressive annual return of 61.26%.

Does TSLA pay a dividend?

Tesla has so far never paid a dividend on its common stock. The company has made it clear that it wishes to retain all earnings to finance its future growth, so it is unlikely it will start paying out dividends in the near future. With the meteoric rise in its share price, few investors will be bothered about this.

Can Tesla shares be traded pre-market and after-hours?

Tesla is listed on the NASDAQ exchange and the regular trading hours are 9:30 AM to 4 PM.

Is it a good time to buy Tesla stock?

Tesla had a fantastic start to the new year. The company announced strong Q4 numbers. In 2021, it delivered 936k vehicles - an increase of 87% compared to the previous year and the outlook for 2022 appears to be good.

However, will the share price continue to soar or is Tesla overvalued?

Tesla bulls are looking to China for growth, while the opening of new Gigafactories should help the company navigate the current shortage of crucial components.

On the other hand, there remain concerns about the company's current valuation and the sustainability of the tech sector's rally in general. Tesla shares would unlikely be spared in a wider tech sell-off, and investors would have to once again buckle up for a bumpy ride.

Technical Analysis for TSLA by TradingView

Tesla has been consolidating in the past few weeks as risk appetite in the stock market decreased. The next major obstacle for the stock will be the $1241 resistance level. A clear breakout above this level could trigger momentum buying and pave the way for further gains. The Daily RSI is not indicating overbought conditions yet, hinting that there could be further room to the upside. 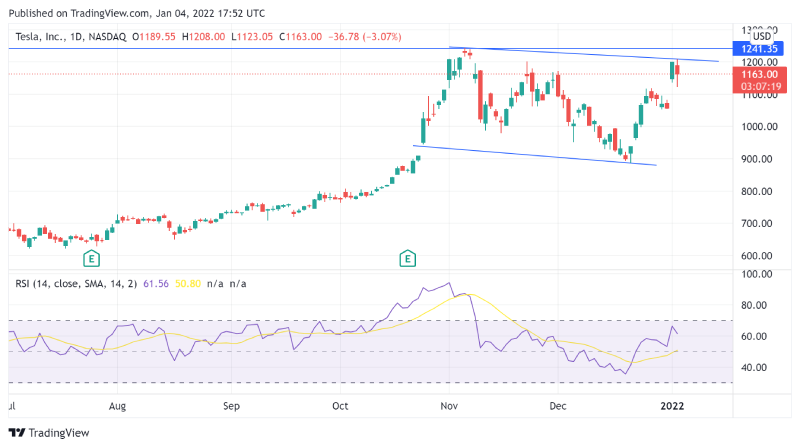 Sign up for a live trading account with Axi and start trading TSLA shares today. Go long or short on Tesla commission-free!

Having some of the largest companies in the world like Amazon, Google and Apple, make the US stock market the main market for share trading, find out how to trade these US shares here.