Although the cheetah is the fastest animal in the world and can catch any animal on the plains, it will wait until it is absolutely sure it can catch its prey. It may hide in the bush for a week, waiting for just the right moment. It will wait for a baby antelope, and not just any baby antelope, but preferably one that is also sick or lame; only then, when there is no chance it can lose its prey, does it attack. That to me is the epitome of professional trading. – Mark Weinstein

Do you remember when you first got into trading?

Forex set-ups are among the first things to enchant the wide-eyed new entrant to the world of Forex.

Those glittering charts with all their indicators that promise to give you a glimpse of the future…and all the profit that portends.

There are five primary types of set-ups:

These set-ups can be used on their own or combined to create high probability, low risk/high reward trade ideas.

The essence of a good trading plan is simplicity. Pick and choose only the best set-ups that suit your trading personality. Doing more than that is a recipe for disaster as conflicting set-ups cause confusion, indecision and mistakes.

So you can get an idea of what a good set-up looks like, I have borrowed an example from Sean Lee, the founder of FXWW and ForexTell. 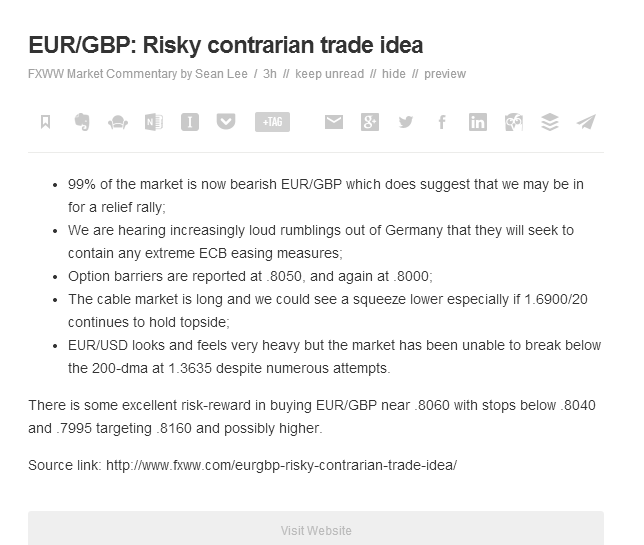 You can see how Sean combines a fundamental directional bias with technical factors to generate an idea for a trade.

A set-up is not a buy signal

Great traders stalk their trades like the cheetah in the quote at the start of this article lies in wait for the antelope.

The set-up is the scenario that arises before the trade is executed. It is not the trade itself. Once the set-up conditions arise, you don’t necessarily enter straight away. You want to time your entry with precision to increase the risk/reward on the trade.

To continue with the cheetah analogy, once the cheetah chooses its prey using patience (the set-up), it still needs to execute the kill (the entry). For this, it has a specific routine involving stealth, speed and strength. The cheetah moves low in the grass using the small rises of the land to disguise its approach. This is followed by a terrifying burst of speed to get close enough to pounce on its prey. Then the cheetah closes in, using raw strength and skill to target the prey’s vulnerable areas with its powerful jaw and sharp claws.

I’ll illustrate with an example using a simple volatility contraction set-up on the GBP/USD with a breakout entry.

You can see how volatility contracts on the right-hand side of the chart, which is our set-up.

We then wait until we get our specific entry signal before we place the actual trade, which in this case is a breakout buy signalled by a close of the 15-minute candle above the Bollinger Band. 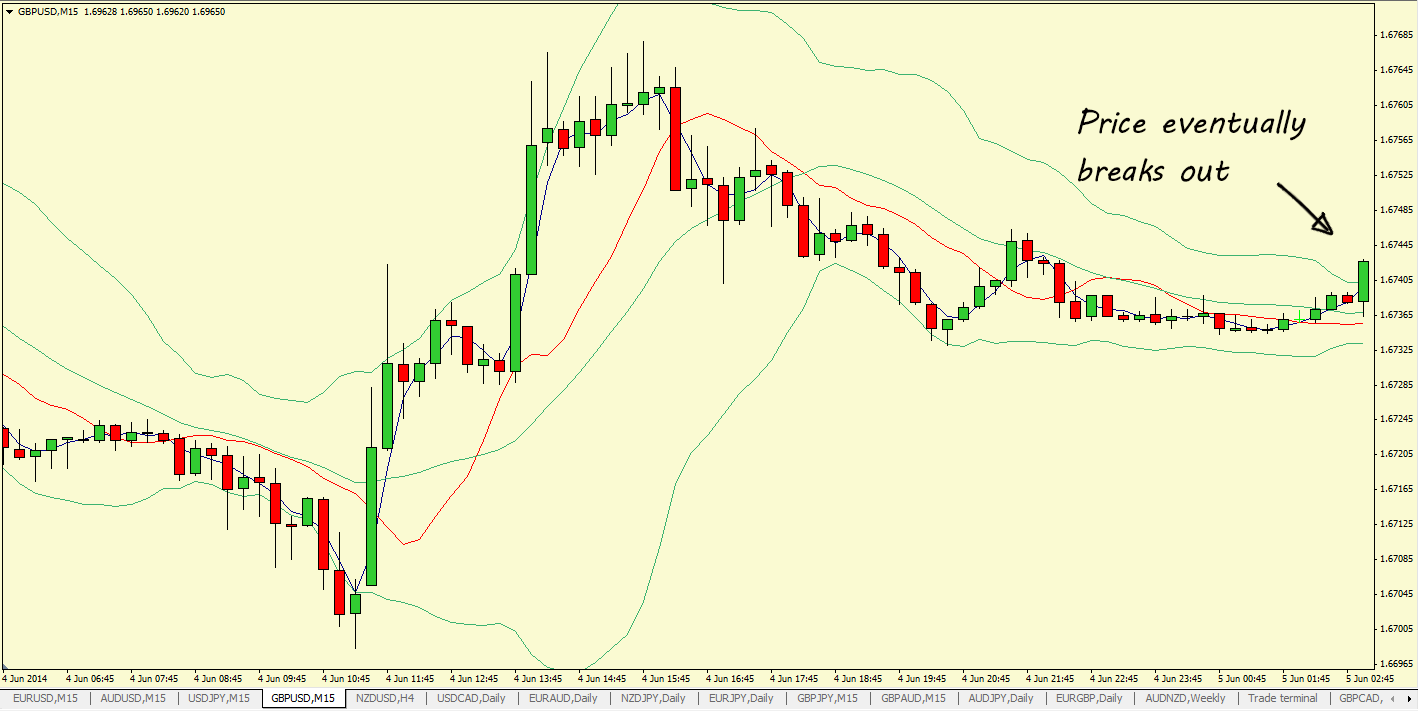 And the result of our patience is a trade that returns three to four times our risk depending on our exit strategy. 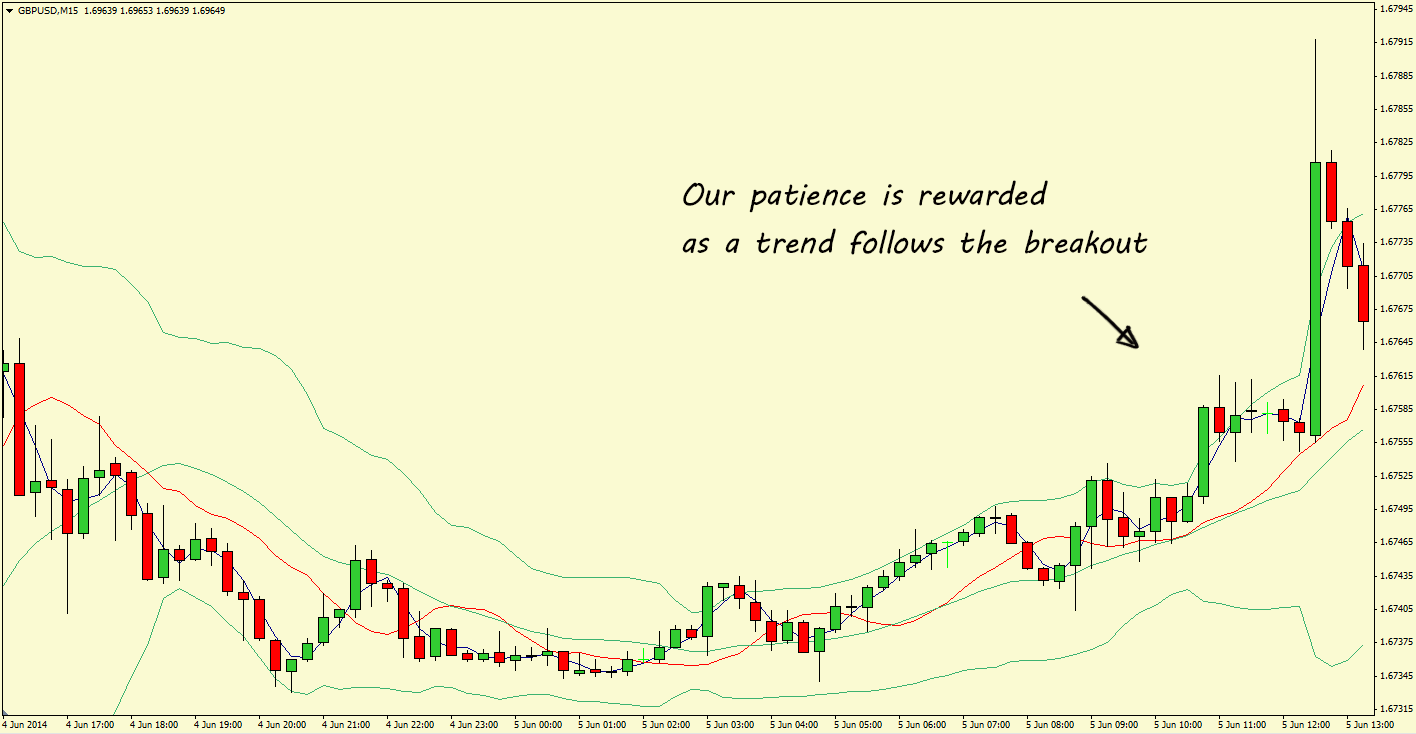 As a trader you have set-ups that alert you to a good trade, but you still need to time your specific entry to maximise the potential profit.

How to think about your set-up

“Luck is what happens when preparation meets opportunity.”

Once you find a good set-up, it is helpful to have a framework for thinking about how you are going to best exploit it.

Consider as your framework:

Let’s use our GBP/USD example again to go through this step by step.

In this case, our main set-up is a low volatility sideways market type.

What are 2–4 options of that can come out of this?
What options do I have for a sideways market? Typically it could either breakout or stay within the range.

How am I going to make money out of this?
In this example, I think the best risk/reward trade opportunity is the breakout, so I will ignore the range trade for the moment.

Where are my potential entry points?
A close above or below the Bollinger Band on the 15-minute charts would be a suitable entry on this set-up.

Where are my potential exit points?
As I believe that prices tend to move towards the clusters of stops at the highs and lows (represented by the red lines on the chart below), I see these as potential profit areas.

I could place my stop on the lower Bollinger Band, meaning that I have a risk/reward of at least 3:1 on the trade.

I would also look to apply a complex exits approach to the trade. 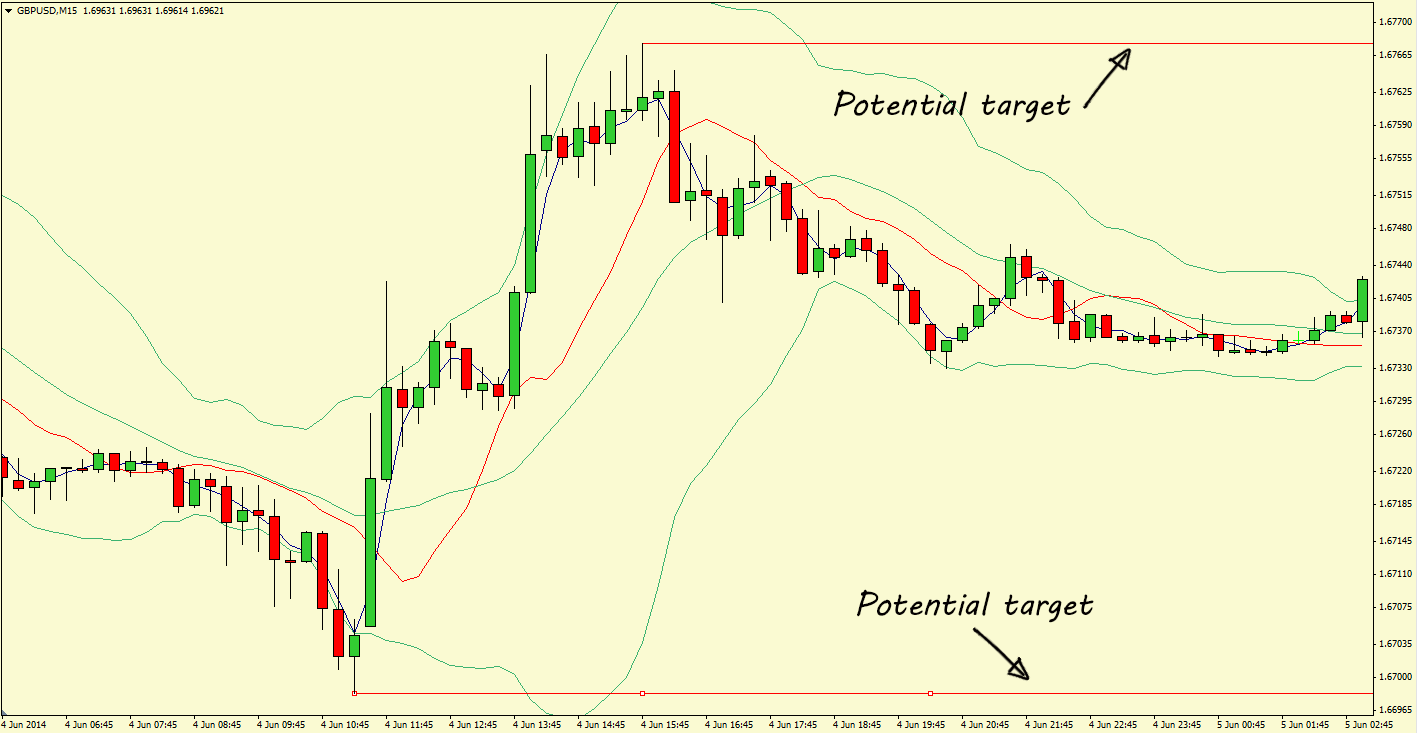 What could happen after I enter my trade?
Once I enter into the trade, there are four things I think could happen:

I should consider how to handle each option and note it down if it is not already in my trading plan.

If a strong trend develops from a breakout, then for me that is a new set-up that allows me to add another position, in the direction of the trade. (I would then need to ask myself the same set of questions about the new set-up.)

Now you know how to think, it’s time to learn some damn good set-ups, which you can add to your trading plan.

But that will have to wait for part 2.