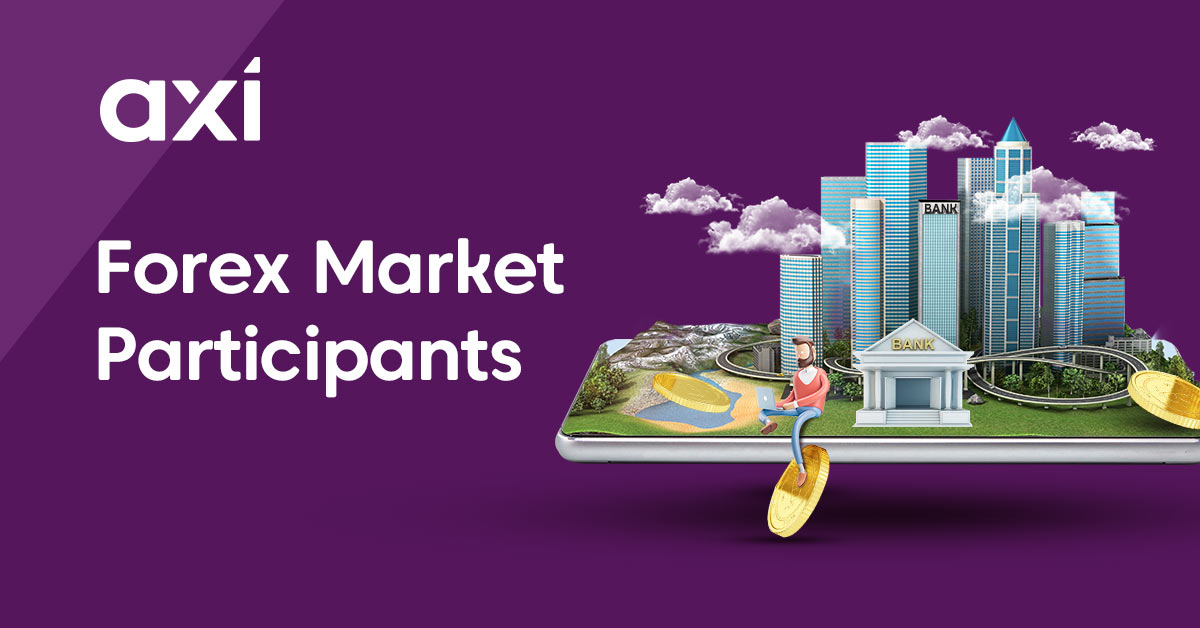 There are a variety of participants in the foreign exchange market - from small retail investors and beginner traders to large hedge funds and commercial banks.

While there is a large number of participants in the market with different goals and motives, we can generally place them into a few categories to understand more easily how the FX market functions.

The FX (foreign exchange) market is the largest financial market in the world. Banks, commercial companies, hedge funds, central banks and individual speculators participate in it and exchange currencies on a daily basis for both speculative and hedging purposes.

According to the latest survey conducted by the Bank of International Settlements (BIS), the daily turnover in the OTC FX market stood at $6.6 trillion in 2019 (vs. $5.1 trillion in 2016). The U.S. Dollar was the most traded currency - being on one side of 88% of all transactions. The Greenback was followed by the Euro at 32% and the Japanese Yen.

Who trades in the forex market?

See below a list of the major players who are trading in the foreign exchange market every day:

Commercials banks are one of the most important participants in the foreign exchange market. They trade on their own behalf, but also provide a channel for their clients to participate in the market. They are essential for providing liquidity and are the backbone of the forex market.

Commercial banks do not only help their customers facilitate their trades, but also participate in the market as speculators. Those desks are known as "proprietary trading desks" and the mission of the prop traders is to make a profit for the bank. Following the financial crisis of 2008, banks have become more risk-averse and prop trading dwindled. However, it can still be found within the banks, especially in countries with less regulatory restrictions.

Commercial banks are amongst the best informed market players, simply due to the infrastructure, amount of capital available and perhaps most importantly - their knowledge about the market. Commercial banks can see a significant amount of flow going through the market - from central banks to hedge funds and investment funds. This information gives them a significant advantage.

Hedge funds are the most prominent members of the group of speculators. While there are several types of hedge funds, the ones that are most active in the FX market are the global macro funds and the currency funds. Macro funds trade in many markets globally, while currency funds are focused on opportunities in the FX market. Hedge funds can handle huge positions in the market and are important participants.

Many traders are probably familiar with the story of how George Soros broke the Bank of England in 1992. While the hedge fund industry has changed a lot since then, they still can have a large impact on markets, especially when many of those funds go after the same trade. This category also includes some smaller participants, like CTAs and system funds.

Investment funds that do not use leverage, hence the term 'real money'. Those are usually pension and mutual funds, who manage large sums of money and use the FX market for transactions when dealing in foreign securities. For example, buying a large amount of UK stocks at the London Stock Exchange, will require the purchase of the local currency, in this case, the Pound Sterling.

Individual traders who usually access the market through a retail broker, but may also use a prime broker if they have the necessary capital. Given the small amount of money needed to open a trading account, retail traders have access to utilise leverage.

It is difficult to estimate the volume of global retail trading, but from the same survey conducted by the Bank of International Settlementslatest in April 2019, $201 million was traded by retail traders. Volumes have been steadily rising and this trend is unlikely to change soon, as the currency market remains very attractive for individual traders.

State-owned investment funds that manage the country‘s money and invest it in various markets. They usually exist in countries that have large inflows of foreign currency, like Qatar from selling natural gas or Kuwait from selling oil. Sovereign wealth funds manage huge amounts of money and hence, their transactions can have a large impact on the FX market.

Firms that offer liquidity, leverage and supporting services to other market participants. Most major banks have prime brokerage operations, but there are also non-bank prime brokers active in the business. The clients of prime brokers are usually other institutional participants, but in some cases, an individual trader can also use a PB, if he meets the requirement set by the broker.

Brokerage firms that allow individual forex traders to access the FX market. They can be market makers, STP brokers or an ECN. Market makers take the opposite side of all the client’s trades and are basically acting as dealers, not brokers. STP (straight-through-processing) brokers direct most or all orders directly to the market, while an ECN allows you to trade with various other participants and the broker has no conflict of interest at all.

Firms that hire individual traders to trade the company’s money and give them in return a certain share of the profits they have realised. The trader can benefit from professional tools that would be too expensive to purchase as an individual, a network of fellow professional traders and capital allocation that can easily reach seven-figure amounts for successful traders.

Companies specialising in money transferring were able to significantly gain market share in the past 10 years. This was primarily driven by digitalisation and consumers becoming more informed. They are often able to beat the exchange rates offered by traditional banks, and given that remittances by foreign workers have a large impact on the economy of certain developing countries, their significance is growing. Money transfer companies generally do not engage in speculative trading.

The foreign exchange fix is a benchmark that is based on trades that were executed in a particular time window. At the fix, banks guarantee to their clients the market mid-rate (the rate between the bid and the ask price).

The most famous fix is the WM/Reuters fix at 4 PM London Time, which is based on trades taking place in a one-minute window. The WM/Reuters fix is important because it is used to calculate major equity benchmarks.

In 2013, there was a scandal surrounding the WM/Reuters fix amid allegations that traders at major banks were colluding to manipulate the exchange rates. It resulted in significant fines for multiple banks and the launch of reforms to make the FX market more transparent.

This group includes various corporations, like multinational firms or exporters/importers. Their main goal is not to make a profit from currency trading, but rather to hedge their currency exposure or get the foreign currency they need to pay their workers in other countries and similar.

Central banks intervene in the market when their currency becomes a problem for the domestic economy, by either being too strong or too weak. This applies to all exchange-rate regimes – the floating, pegged and fixed.

For example, the SNB has been very active during the past few years, when it has tried to weaken the Swiss Franc against the Euro. Furthermore, we can take the Hong Kong Dollar as an example for the pegged exchange-rate regime. USD/HKD is allowed to trade within a 7.75 to 7.85 range, which means that the Hong Kong Monetary Authority (HKMA) will sell it when it gets too close to the upper range and buy it when it gets too close to the lower range of the band.

How do banks trade forex?

Banks mostly facilitate transactions on behalf of their customers, but they can also trade with each other or take speculative positions (prop trading). When dealing with customers, banks often hedge their exposure as they don't have infinite capital and don't want to take too much of a risk.

However, banks can also engage in speculative trading. Their prop desk will seek to gain a profit from market moves, just like other speculators. Banks do not disclose their strategies of course, but given the massive amount of information they can gather, they clearly have a powerful edge.

Who controls the forex market?

The foreign exchange market is decentralised and there is no organisation that controls it. However, commercial banks who act as market makers, and central banks have significant powers and can influence the market.

Generally, the FX market is too big for one particular participant to control.

For example, if a hedge fund decided to buy $1 billion of EUR/USD at market price, the currency pair would most likely jump just based on that. However, the effect of this transaction would be short-lived as this is one of the most commonly traded currency pairs.

Furthermore, it is not in the interest of market participants to move the market in this way as it worsens the execution for them but also reveals what they are doing. It is far easier for a hedge fund to keep a large FX position secret if it was built up over time rather than by executing a massive trade in one go.

According to the 43rd annual survey of liquidity consumption in the global forex market by Euromoney, this is the top 10 overall by market share in 2021.

If you are new to forex, check out our forex trading for beginners guide. Understand how the FX market works then put your new knowledge to the test using a demo trading account today!