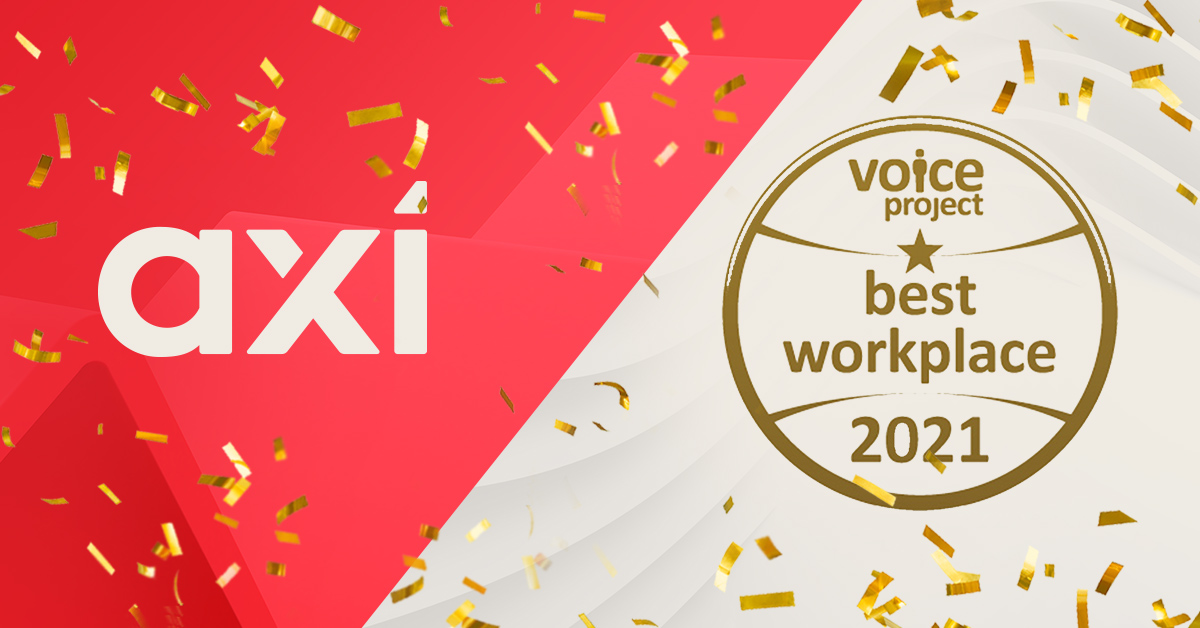 Axi, a global online FX and CFD company that caters to retail and institutional traders, was recently voted as one of the Best Workplaces in 2021 by the Voice Project.

The recognition was given after a comprehensive survey of Axi employees about their experiences and feedback on their work, responsibilities and corporate culture.

Rajesh Yohannan, Chief Executive Officer at Axi said after learning of the Best Workplace award: “This is a fantastic result. I’m honoured and thankful for everyone for their contributions for making Axi one of the best workplaces.”

Moreover, aligning with Axi’s continuous improvement philosophy, Rajesh added: “While it’s good to be recognised, this award doesn’t mean that we can rest on our laurels. There is still room for improvement. In the coming weeks, I will announce a series of initiatives and projects to address areas of improvement.”

The Voice Project’s “Best Workplace” awards recognise organisations who have achieved exceptional levels of employee engagement and satisfaction. These organisations tend to engage in effective management practices such as articulating and communicating the company’s overall direction, assessing and providing adequate resources, and supporting employees in learning and in career development. Employees in these organisations often feel supported, empowered and engaged as they help drive organisational performance.

In his statement while presenting the award to Axi, Alex Kashian, senior consultant at the Voice Project said: “Based on the responses we received, I’m pleased to say that Axi has reached a strong engagement score of 80%, which is impressive. It is also worth noting that Axi scored an average of 80% across all segments of the survey, which strongly supports our decision for the Best Workplace award.”

The Voice Project, which is a leading provider of employee engagement, customer service and 360 leadership surveys, has conducted surveys to over 3 million people on a wide range of industries around the world.

The Best Workplace Award given to Axi recognises the company’s efforts and existing culture that promotes:

As it operates in an environment that requires a high level of accountability, Axi has built of culture that heavily commits to autonomy, which empowers all levels of staff to make decisions by themselves.

Emphasised by Jericka, “At Axi, we follow correct processes, conduct investigations, and work towards continuous improvement.  Team members are encouraged to discuss any issue with a view to improve.”

This commitment and belief in people have translated to a successful transition for Axi’s team, which requires working from home during this difficult period.

Explained by Sebastian, “Axi gives us a good sense of freedom to make decisions to improve things. The company understands the challenges and is really good at allowing the right person to fix the problems.”

Given its global operations, with offices located in several countries, Axi prioritises team spirit and has made it a core part of its ethos.

It has been exemplified by Mike who shared a recent experience, “Recently, we had a migration project with a tight deadline that was reduced down to 3 months. Everyone had to realign all the planning, be flexible, work together as a team, and remain focused on the result. While it was a tough project, we knew it was something we all needed to achieve. Moreover, management was very supportive and shared the workload.”

Axi is committed to building a future where everyone feels included and diversity is encouraged. This is showcased in the company’s support for women in the workforce and to their families and communities.

Hannah enjoys the supportive workplace provided by Axi that allows her to achieve so much as a professional and as a parent.

She said, “For me, a combination of self-belief, trust in my ability and the support of my peers has meant my transition back into work (after maternity leave) has actually been really enjoyable. I value and enjoy what I do and it’s a big part of who I am. I hope that the rise of shared parental leave means that balancing family and a career won’t be so much of a challenge for women in the future.”

Axi is a global online FX and CFD trading company, trusted by thousands of ambitious customers in 100+ countries around the world. We help new traders, pro-traders, trading businesses, banks and financial organizations find the edge they need to achieve their financial goals through informed transactions made on the world's financial markets. Axi offers a wide range of assets including CFDs for several asset classes including forex, gold, silver, coffee and other commodities.

At Axi, we are proud of our reputation as an honest, fair and trusted broker. Our many awards and 'excellent' reviews through Trustpilot, prove we have earned the confidence of customers who value our outstanding service, fast execution, secure payments, segregated funds and easy withdrawals.

Moreover, we also work pro-actively with the leading regulatory governing authorities globally to ensure we exceed the highest standards in the industry.

Axi rebrands to reflect its global expansion and multi-asset offering.