Over the week, the AUD was butchered in wake of the recent dismal Australian jobs, construction output data and ongoing trade tensions.

Poor domestic data increased bets for a 25 bps interest rate cut this June, and another by November. This sent government 10 year bond yields down 5bps to record lows at 1.53%. Australian bond is currently yielding close to 80 bps less than its American counterpart, leaving not much incentive to hold the AUD. Apart from the yield differential, the AUD is also feeling the heat of the risk-off tone in the financial markets.

Next week, Australia's building approvals and private capital expenditure data will give us a better idea of the health of the economy in terms of future jobs and spending. However, investors could focus more on China's Manufacturing PMI due next Friday instead therefore causing this China-dependent currency to react much more to China's data as opposed to their own. The market suspects that China's data is likely to deliver more negative news on their economy, with the official manufacturing PMI set to drop back into contraction territory as pressure from the trade war mounts, this will only place pressure on the AUD.

Over the week, NZD was dragged along with the AUD as trade tension shows no signs of easing. Even with retail sales data coming in higher than expected, the rally was quickly muted as risk off sentiments weighed down on the currency. Government bond yield is down 2 bps to 1.765%. Today, April month trade data flashed mixed readings which traders gave little importance to.

Next week will be an important data week for the New Zealand. Its financial stability report, business confidence report and annual budget release will be due. RBNZ Orr is also due to speak and a further dovish move could place strain on the currency. Also, China's PMI data is something to look out for next week as well. 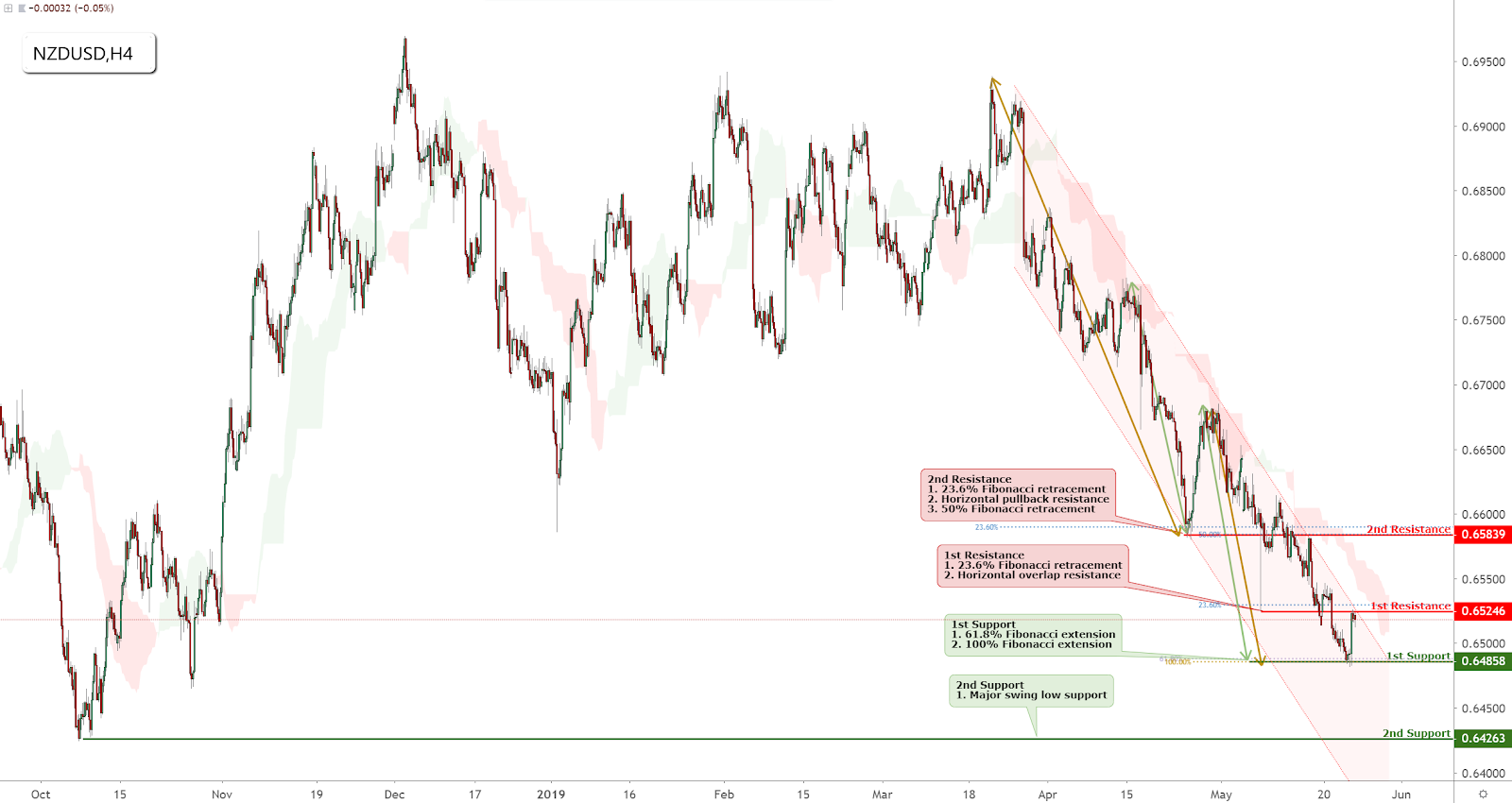 NZDUSD has continued its drop to the 1st support level identified last week. It bounced nicely above the support level and is now testing 1st resistance at 0.6524. It remains in a bearish channel and below strong Ichimoku bearish pressure. The next support is at 0.6426 which is a major swing low support.

Based on PsyQuation, NZDUSD started the day strong rising by about 0.05% before dropping strongly losing almost 0.1% of its value.

What does this mean?

Such price journey movements where a currency rises at the beginning before dropping strongly shows that there is very strong bearish pressure on the currency pair because the bears not only erased the gains of the bulls at the start of the day, but went on to overpower them and push the price of the currency pair further down.

Did you know monitoring the price journey movements of a currency pair can provide useful insights into its direction for the day? Wish to accurately monitor the price journey of each currency? Head over to the PsyQuation website to find out more.

Over the week, Canada's domestic data came in better than expected, however the rally was muted as falling oil prices and rising US-China trade tension overshadowed the data. CAD appreciated slightly after its retail sales came in above forecast however sparked a short live rally as crude price started to fall to fresh lows. This was similarly the case when wholesale sales increased by 1.4%. In other times, this would have marked a strong rebound and would have been good news for the currency.

Next week, BoC will deliver their rate statement which the market expects to remain unchanged. Their GDP data will also be released, which is something to watch closely. 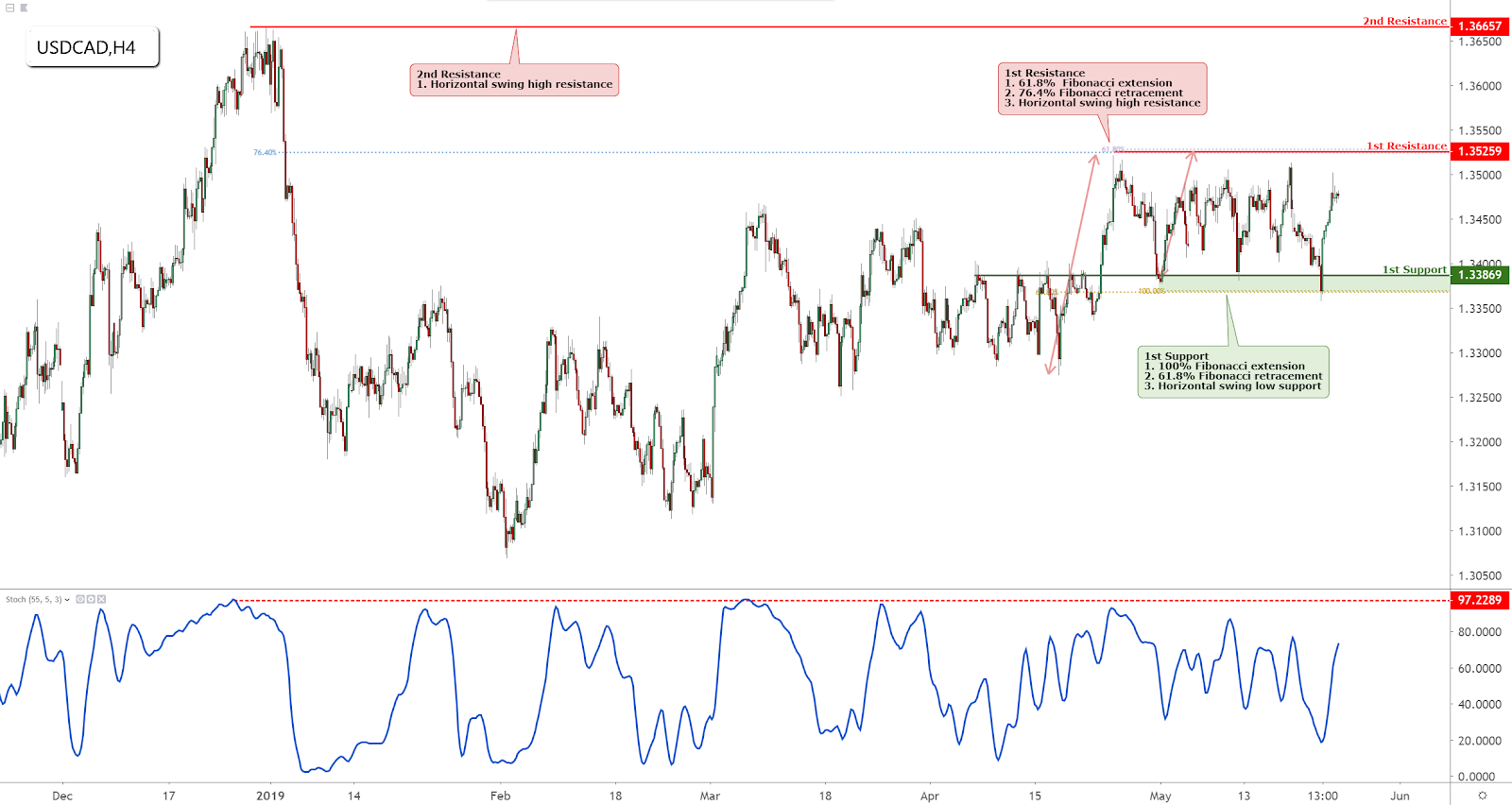 USDCAD remained in a range and bounced off the 1st support identified last week. This week it will remain in a range with first support at 1.3386 and first resistance at 1.3525.

Based on PsyQuation, USDCAD started the day taking small hits and dropping about 0.02%. Each time it lost some of its value, it recovered strongly and has since made a strong recovery, gaining almost 0.025% since the opening.

What does this mean?

Such price journey movements where prices keep rebounding each time it made initial losses is a sign of bulls overpowering the bears in the market, preventing them from pushing prices down and instead, pushing prices up strongly.

Did you know monitoring the price journey movements of a currency pair can provide useful insights into its direction for the day? Wish to accurately monitor the price journey of each currency? Head over to the PsyQuation website to find out more.