Oil Prices – Who Is Driving the Price

At the end of March 2019, crude oil prices completed their biggest quarterly gain in a decade as a series of factors hit the market in close succession. Historically the common view may have been that Opec, led predominantly by Saudi Arabia, had the potential to dictate where the price of crude was heading, simply by regulating the amount they released into the market from one week to the next, but clearly the situation is rather more complex. 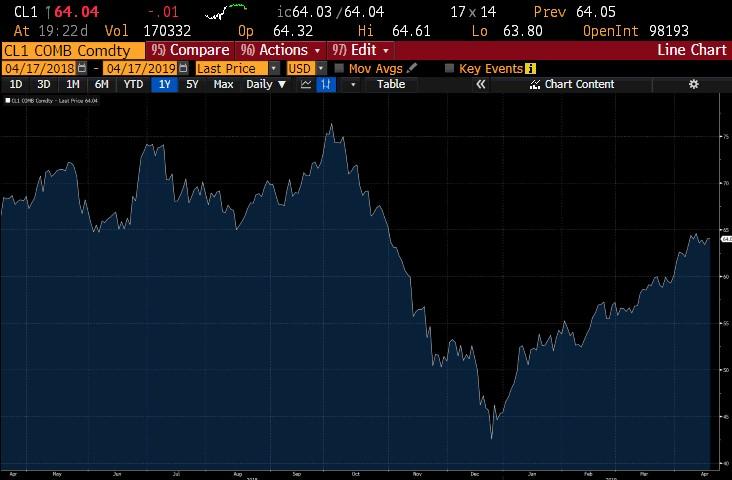 In this article, we’re going to take a look at some of those big factors which have served to drive oil prices higher since the start of the year – and see what potential disruptive influences the market may have to contend with as we move into the summer. To put the data into context, current estimates put demand for oil at around 100 million barrels per day (bpd).

US Sanctions Against Iran

In November 2018, Donald Trump reinstated a series of sanctions against Iran, including a ban on oil exports. A series of exemptions were however granted for eight countries ranging from Japan to Italy, allowing them to continue buying Iranian oil for six months.

The initial response was for oil prices to fall. The wide-reaching waivers and increased US production meant there was no impact on available supplies.

Iran has proven oil reserves of 155 billion barrels. That’s the third largest reserve globally. In April 2018, estimates were that Iran was shipping 2.5million bpd. That figure is now reported to be below 1 million.

Presidential Elections were held in Venezuela in May 2018. The result was condemned by opposition parties and much of the global community, but the incumbent declared victory and was inaugurated in early January 2019. This lead to US sanctions on oil exports from Venezuela and although exports had been in decline since a recent peak of just over 2 million bpd in 2015, by the end of February 2019 the figure had slumped to under 1 million bpd.

Venezuela’s biggest overseas customer for oil was historically the US and whilst new export markets are being found, the country was also reliant on imports from the US to keep its crude oil flowing. US Crude prices jumped almost 5% in the first three weeks of the sanctions being enforced, although other events may have exaggerated the gains.

Proven oil reserves for the country are in excess of 300 billion barrels, making it the most oil-rich country in the world, yet its daily output is now on a par with that of the UK. US sanctions are having limited effect for now with China and India continuing to import from the country, but with Washington applying pressure here, a slump could soon be seen. With Oil accounting for over 95% of Venezuela’s exports, such a move risks making the current humanitarian crisis even worse.

Since the death of the former Libyan leader in 2011, the country has been in something of a fractious state. The country is currently in the midst of a civil war, although despite this is still managing to export over 1 million bpd.

Fighting escalated earlier in April 2019, with the opposition army threatening to unseat the UN-backed government in Tripoli, something which served to push oil prices to fresh highs for the year.

Libya has managed to rebuild its oil output from a low of 150,000 bpd in 2014 to the current level in excess of 1 million bpd. Conflict could however see this supply shuttered, either through sanctions or disruption to terminals and pipelines.

These three events explain part of the story of the oil price rally over the first quarter of 2019, but what might we see in the near term?

Slowing global trade has been raising concerns that a recession was imminent. Indeed, there is evidence to suggest that the last five recessions have all been preceded by spikes in the oil price. No surprise then that concerns were heightened by the sharp rise in oil prices in late 2018. However, with Chinese growth figures coming in better than some had expected and optimism building that a resolution can be found between Beijing and Washington over the ongoing trade dispute, this may be averted. Increased global demand would therefore necessitate more oil supply to prevent prices rising.

Fracking to tap so-called Shale Oil has become increasingly popular in recent years, largely as a result of technological advances, although the break-even point for producing in this way remains open to debate. Some suggestions are it can be as low as $30 a barrel, but that appears not to account for many costs incurred by the producers. This article suggests the figure can be as high as $64 a barrel. At current prices that means it’s just about viable, but with the industry having a long investment cycle and many producers having incurred heavy losses in recent years, there are plenty of reasons to believe that shale production won’t be sweeping in to save the day.

Donald Trump’s liberal use of sanctions against oil producing majors may offer a presence on the world stage, but it’s not without risk. Global growth is still seemingly reliant on cheap oil, American consumers – many of whom will be going to the polls next year to vote for a new President – don’t want to pay excessive for filling up a car or running their heating, and mismanagement of the situation brings the potential for existing humanitarian crises to escalate further. Against the current backdrop however, can the rise in oil prices be abated?