Fourth quarter GDP figures for the world’s largest economy came in overnight, rising to 2.2% from the expected target of 2.3%.

President Trump has been quite vocal about hitting a full year growth figure of 3 percent, and 2018 came in at 2.9%, a fraction under.

One of the big areas analysts keep a close eye on is consumer spending, which grew at a pace of just 2.5 percent, missing projections and being revised lower.

The economic headwinds continue to grow, with slowing global growth, uncertainty around Brexit and the ongoing trade talks with China.

Key technical levels to watch on the US dollar index

The US dollar index marched higher overnight, following the GDP figure release but had more to do with optimism around the US-China trade talks.

The US dollar is forming a slow and steady ascending triangle, which began back in September 2018.

From there, you will note how the US dollar hit a new recent higher high, pulled back and has since hit that resistance point three more times.

More importantly, with each sell-off of the US dollar, it has been met with consistent buying support, with successive lows getting higher and higher.

The market sees the current long-term consolidation on par with the level of uncertainty around global conditions. The US Fed recently confirmed their patient stance of zero rate hikes for 2019 and moving to a less aggressive guidance going forward.

Couple that with slowing economic conditions across Europe and China and inflation levels falling, and you can see why traders are hesitant to back any one currency.

Bullish US dollar traders could be focused on a potential move back up towards resistance at 97.50. From here, the potential for a strong breakout is high.

US dollar bears could be focusing on the resistance point as a key level to potentially sell strength. But right now, with the market in what we’d call ‘no-man’s land’, traders could be patiently waiting for a move towards resistance or support before taking any key positions. 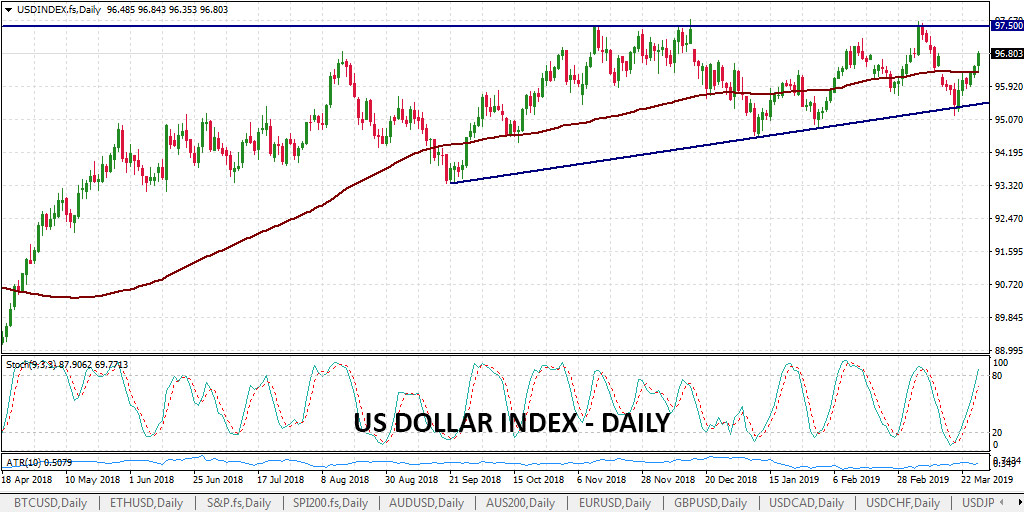