Home / Blog / Market Analysis / Charts Of The Week: Interest in the EUR

Charts Of The Week: Interest in the EUR 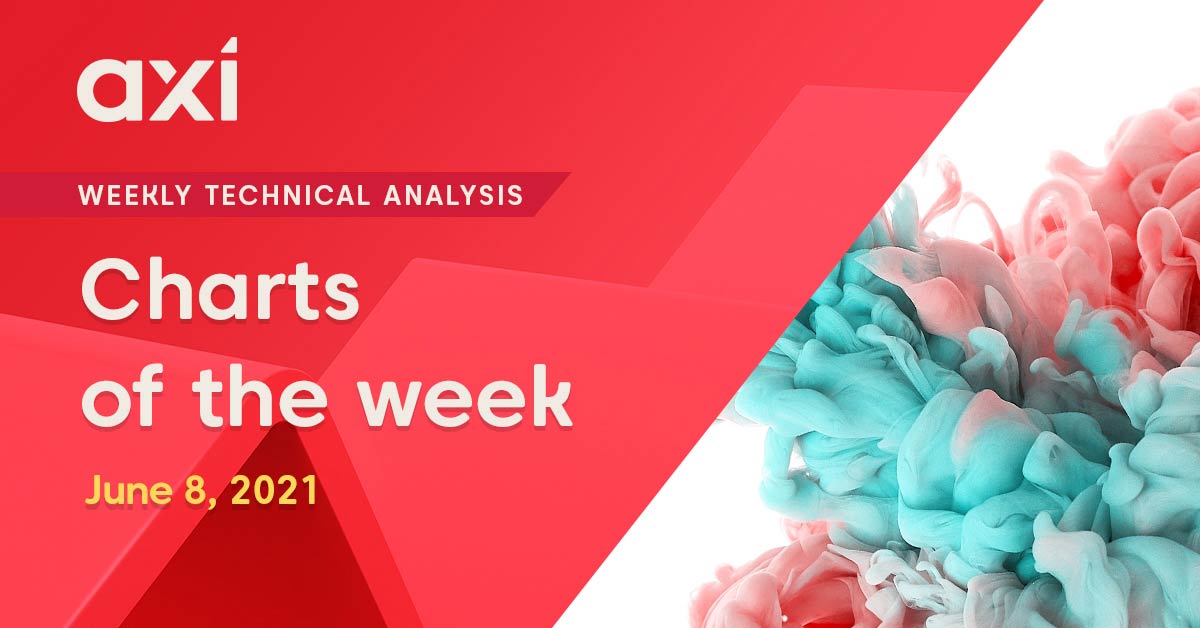 The US Dollar is under pressure following a rather weak NFP print on Friday, and equity markets are resuming their record rally. With two major central bank meetings and a fair amount of economic data to come, there should be no lack of volatility this week.

The European Central Bank (ECB) is meeting on Thursday and is likely to reiterate its dovish message. While the economy of the Euro Zone has picked up momentum as more EU countries lifted their COVID-19 restrictions, the recovery has been rather sluggish and it will take longer for the labor market to bounce back. The central bank will therefore remain cautious, despite an uptick in inflation.

A dovish ECB is already priced in, which is unlikely to put the Euro under too much pressure against the Dollar. However, the EUR cross pairs could be more interesting.

EUR/GBP has been consolidating in the past few weeks, but the broad downtrend remains intact. The currency pair failed to advance beyond the 0.87 resistance level and pressure could increase following the ECB meeting. A break below 0.8560 support would pave the way for a correction towards at least 0.8470, if not the 2019 low at 0.8280.

EUR/CAD could see a breakdown to the downside too. The level to watch is 1.4580 – a break below this level would pave the way for a continuation of the downtrend towards 1.4266

The Bank of Canada will announce their rate decision on Wednesday. We’re unlikely to see any surprises, but the central bank could pave the way for further tightening at its July meeting. The vaccination campaign in Canada has picked up momentum and the economic outlook for the second half of the year has improved. A hawkish BoC and rising commodity prices should underpin the CAD rally in the near-term.

CAD/JPY does look overbought and the negative RSI divergence on the Daily chart is giving cause for concern. However, the uptrend remains strong and the currency pair is not showing any signs of weakness. A hawkish BoC and rising oil prices could give it another major boost and enable a continuation of the rally towards the 92 level.

The recovery in USD/CAD could end up being short-lived as well, with the currency pair already struggling to gain momentum and failing at 1.21 resistance. Traders will be keeping an eye on the psychologically important 1.20 support level, as a break below that level could spell further trouble ahead for the currency pair. The next notable support level would then lie at 1.18.

Gold recovered fairly quickly from its recent slump. Renewed Dollar weakness and ongoing inflation concerns should keep demand for the precious metal intact in the near-term.

XAU/USD bounced off the 200 DMA and is approaching the $1900 resistance level again. Imminent resistance is seen at $1916. A daily close above this level could help the metal to gain momentum and pave the way for a continuation of the rally towards $1960, and eventually $2000.