A spotlight on tech earnings and ECB's non-hawkish stance 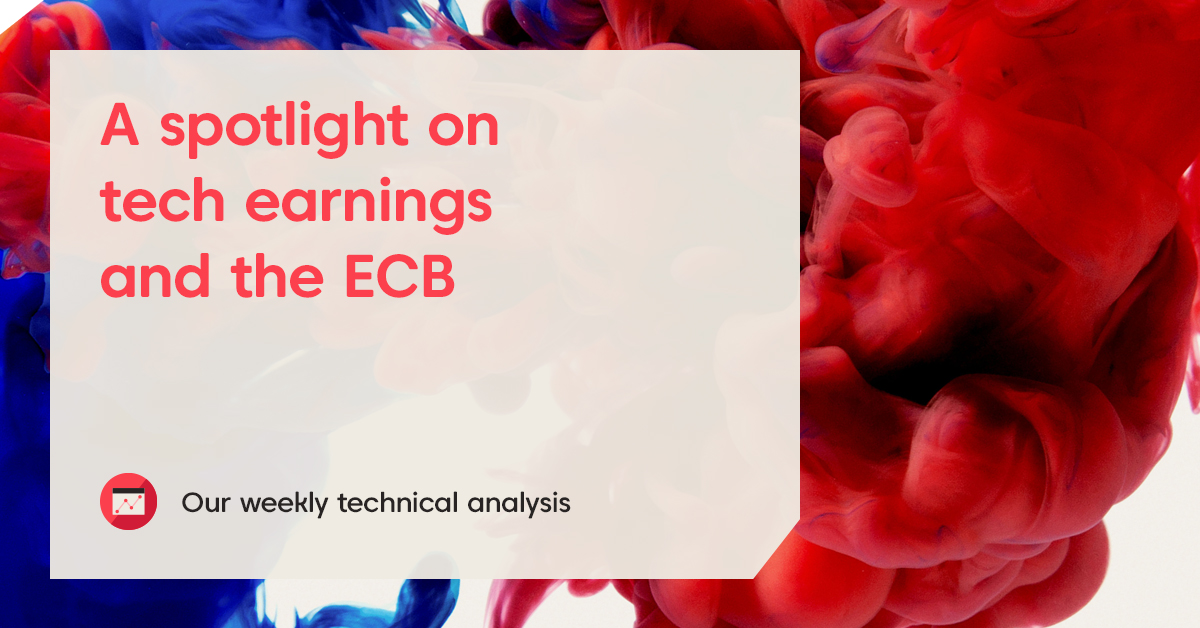 Five tech giants will present their third-quarter results and investors will be watching closely.

Facebook is first in line and, given the recent issues the company has been facing (primarily regulatory ones), it is likely to be more cautious in its guidance, which could add to downward pressure on the stock price.

Alphabet, Microsoft, Apple and Amazon will also release their latest figures during the course of the week. In general, investors are increasingly concerned about high valuations and will therefore be less forgiving of a miss this season.

You can trade on the direction of the tech-heavy NASDAQ 100 index with the USTECH cash CFD. A break below the psychological support level of 15,000 points could pave the way for another correction towards at least 14,382 points.

Don't expect a hawkish turn from the ECB

The European Central Bank will likely acknowledge an increase in inflation risks on Thursday, but will at the same time try to play it down and signal that a hawkish turn is not imminent. Overall, the meeting is likely to end up being slightly negative for the Euro, although major price swings are unlikely to occur.

EUR/JPY is still looking overbought, and a cautious ECB could put the currency pair under pressure. A daily close below 132 support would pave the way for a correction towards 130.80.

Bank of Canada Rate Decision (Wednesday) - The central bank will announce further tapering of its bond-buying program, which will not come as a surprise. The focus will be on the BoC´s outlook, however, with the market already pricing in aggressive monetary policy tightening; CAD bulls might end up disappointed.

Bank of Japan Meeting (Wednesday) – This is likely to end up being a non-event for markets. Things still look pretty solid for USD/JPY, although the short-term direction of the Yen will primarily depend on the risk appetite in global markets.

EUR/CHF is in a clear downtrend. The currency pair reached a fresh 1-year-low on Friday, and while there are no signs yet that the Swiss National Bank is getting nervous about the strengthening Franc, we are approaching some interesting levels.

The Daily RSI has not reached oversold territory yet, signaling there could be more room to the downside. 1.05 is the key level traders will be watching and the currency pair is likely to catch a bid within the 1.05-1.0520 region.

Is Gold about to pick up some momentum?

Gold has been surprisingly quiet in the past few weeks and stuck within a rather tight range. However, with inflation concerns picking up, this could rapidly change. Given that the ECB is amongst the world´s major central banks least likely to turn hawkish in the near-term, XAU/EUR could be an attractive choice.

A breakout above the €1567 resistance level may pave the way for a rally towards the November 2020 high at €1651, followed by the 2020 high at €1750. While there are concerns that cryptocurrencies have replaced Gold as an inflation hedge, their short history and high volatility mean that the precious metal is unlikely to lose its shine in the near future.