The Yield Curve - What It Is and Why It Matters

There has been a lot of talk in recent weeks regarding the yield curve and it becoming inverted, but what is this and why does it matter? The yield curve is a chart drawn at a specific point in time, showing the yield generated by a series of debt instruments with different maturity dates and the example we’re going to be focusing on here is US government debt, commonly known as ‘Treasuries’.

US Government debt is seen globally as the benchmark for risk free investing, or the risk free rate of return. Whilst there’s always some risk with every investment, the US government has never defaulted on debt repayments even in times of severe economic stress, hence the significance of the shift in the yield curve.

If you buy debt, you are foregoing the opportunity to invest that money elsewhere. Because of this, longer dated debt instruments tend to offer a higher yield, especially in times of economic growth. With US Treasuries, a common benchmark is the difference between the yield on a 10-year bond and a three-month bond. The chart below from the St Louis Fed provides a useful illustration of the maturities of the 10-year minus the three-month bond. Most of the time it’s above zero, but in 1989, 2000 and 2006, the number fell into negative territory. In each of these instances, within a couple of years, the US economy fell into recession.

Last week’s move into negative territory for this reading shows an inversion of the yield curve – if investors are wary of the longer term outlook, they will buy more long-term investments which pushes the price up and in turn the yield down. This is what is causing so much excitement amongst economists right now.

The other metric to watch is the difference in the yield between the 2-year and the 5-year bond yield. Historically, when the two-year yield is more than 12 basis points (0.12%) above the 5-year yield, the Federal Reserve has reacted by cutting interest rates. 2006 was an exception here where the Fed waited for a 19 point inversion before intervening. The punishing global financial crisis followed, so many in the market believe a more timely response will be seen next time round. On March 22nd, the inversion reached 9 points before retreating, but this will remain a closely watched factor.

The chart below shows how the yields of different maturity US treasuries have changed between January 2nd and March 25th 2019. Note how for January (the blue column), the three-month column is below that of the 10-year equivalent. This is how historically the yield curve normally behaves. Move to late March (the red column) and the situation has inverted – the three-month column is now above that of the 10-year one. 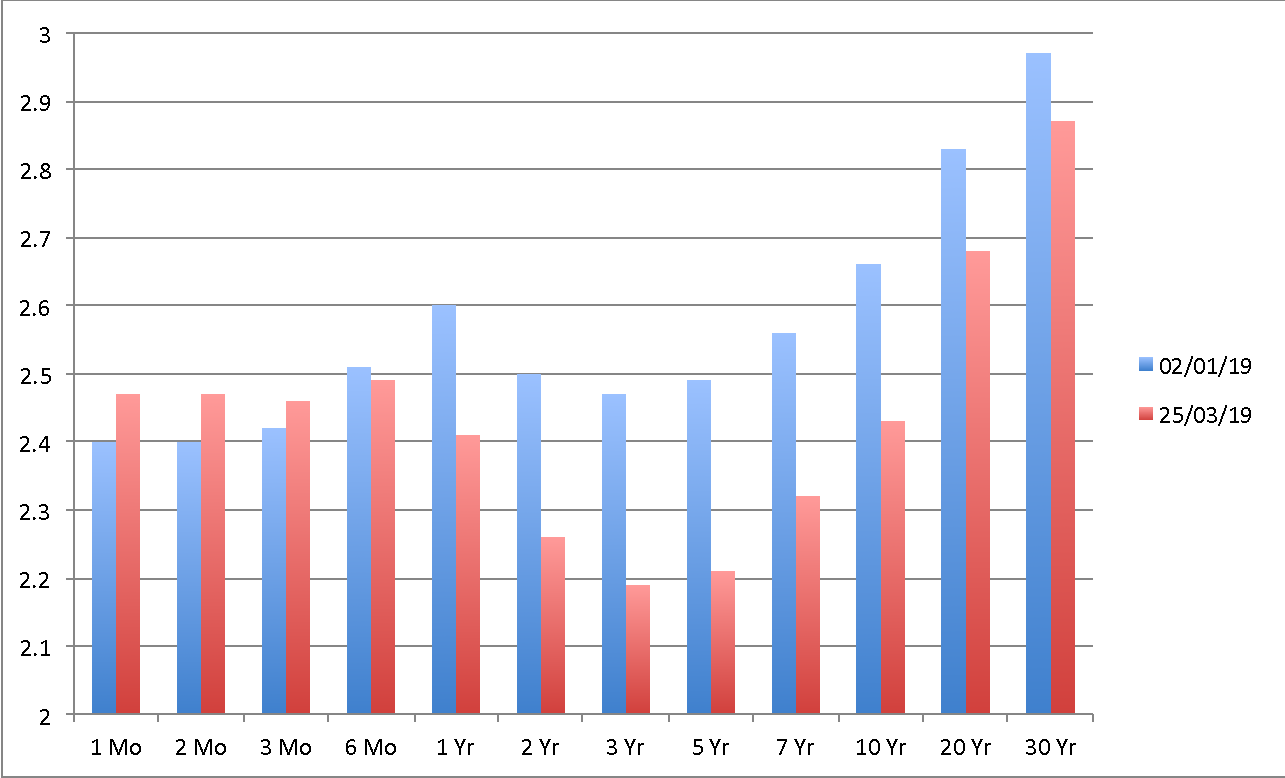 A history of US treasury prices across various maturities – the source of the data above - can be found here.

Yield curve inversions may sound somewhat complicated and detached from the day to day fundamentals that often dictate market movements, but history shows us that this is far from being the case. It would seem that watching the divergence in yields over various bond maturities can provide invaluable insight as to what may be in store for the economy in the future.