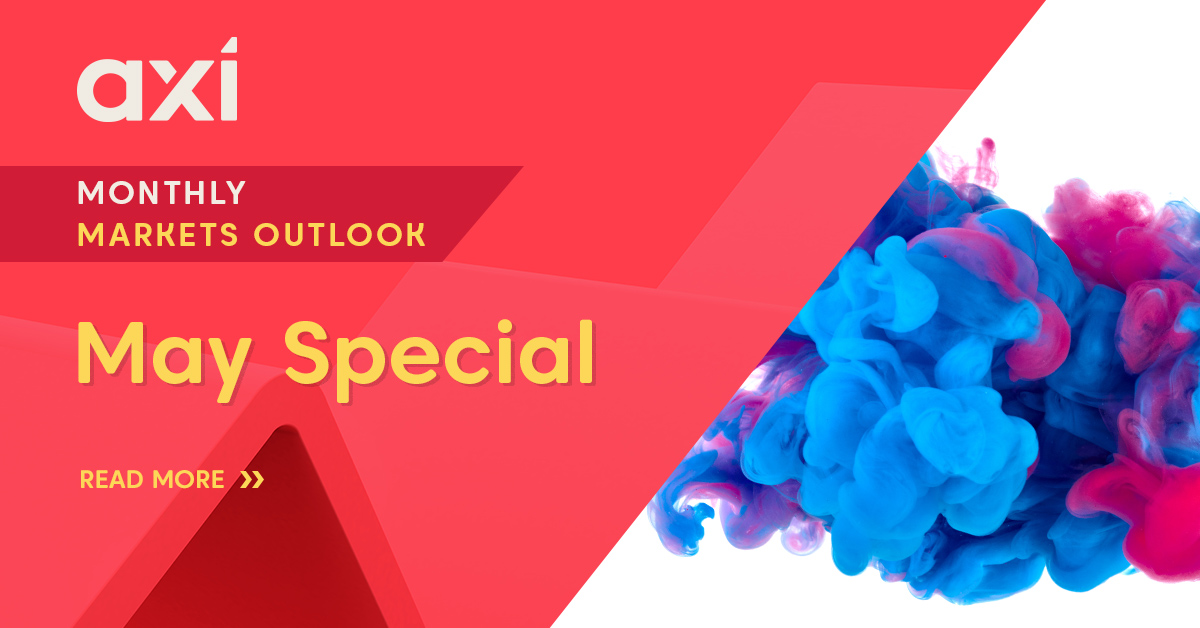 April ended up being a good month for equities – primarily for Wall Street, but European markets managed to catch up slightly amid an improvement of the EU's vaccination campaign. The first half was fairly volatile, while the second half was marked by a high-level consolidation phase.

It was an even better month for commodities; Oil advanced further and regained some ground following a tough March, Copper prices rose to a 10-year high, and Coffee prices surged too. Looking at the FX market, the focus in the past four weeks has been on the broad Dollar weakness and the Euro's impressive recovery rally.

In this article, we will look at the major market themes for May and the outlook for some key trading instruments.

Inflation fears are back

Inflation fears never disappeared completely, but were pushed into the background as the Federal Reserve did their best to reassure market participants that they see the recent uptick as temporary. However, traders are starting to think that the US central bank will be forced to hike rates much earlier than what is being projected by the FOMC right now. The pressure on the Fed could intensify this week, as more US data releases point to a strong economic recovery. The upcoming employment figures are likely to exceed expectations, with the NFP number indicating that over a million jobs have been added in April. Given the uncertainty that persists with the pandemic, it is unlikely that the US central bank will shift its policy, but the pressure is increasing.

These concerns could push bond yields up in the coming weeks, which would support the US Dollar, but bring global equity markets under pressure. The Greenback could particularly benefit against low-yielding currencies such as the Japanese Yen and Swiss Franc, while the Euro and British Pound are likely to show more resilience.

USD/JPY is set to benefit from this, with the uptrend resuming following a larger sell-off in April. Trendline support from the January low remains intact, and the currency pair should test the 110.00 level soon. Strong employment figures could push USD/JPY towards the 2020 high at 112.25.

Improve outlook for the Euro

The Euro has been on a steady recovery path since late March and, despite the recent setback on the last trading day of April, this is unlikely to change. The ECB sees the recent rise in inflation as temporary and European investors seem less concerned about it than in the United States. Meanwhile, the growth outlook for the Eurozone is improving as the vaccination campaign is picking up momentum and more member states are planning to reopen their economies.

Euro bulls are looking at 1.2350 as the next target for EUR/USD, but the currency pair will have to overcome the falling trendline resistance from the January high as well as the 1.2240 resistance level first.

The Bank of England (BoE) is likely to upgrade its economic outlook at its upcoming meeting and hint at tapering its asset purchases in the near-term. The UK´s vaccination campaign has made great progress and the economy is already in its reopening phase. Pent-up demand will give the economy a massive boost in the second quarter and the extension of jobs support scheme until September will help to stabilize the unemployment rate.

While this is good news overall, political concerns may weigh on the British Pound in the short-term, primarily due to the Scottish Parliamentary election.

Commodity currencies in the spotlight

The next key event for the Australian Dollar will be the RBA rate announcement. The central bank will keep rates unchanged, and it is unlikely that there will be any hawkish surprises. While the growth outlook has improved, the uptick in inflation was modest and is unlikely to worry the RBA. Rising commodity prices should keep the AUD supported, although the short-term direction might primarily depend on the direction of the US Dollar and whether global markets switch back into "risk-on" mode.

Meanwhile, the Canadian Dollar should continue to outperform. The currency is currently benefiting from a strong economic recovery in Canada and a progressing vaccination campaign that is fueling hopes for a speedier lifting of restrictions. While the Bank of Canada surprised markets with its hawkish stance, the Federal Reserve remained dovish. Furthermore, Oil prices are recovering again, giving the currency an additional boost.

USD/CAD does look oversold in the short-term, and with recent rise in US yields we might see a bit of a correction. However, sellers are likely to return around 1.2380. The CAD crosses are also worth keeping an eye on, especially CAD/JPY, which could soon test the 2018 high at 91.60.

Charts Of The Day: Equities under pressure as inflation fears intensify