Inflation figures in the spotlight 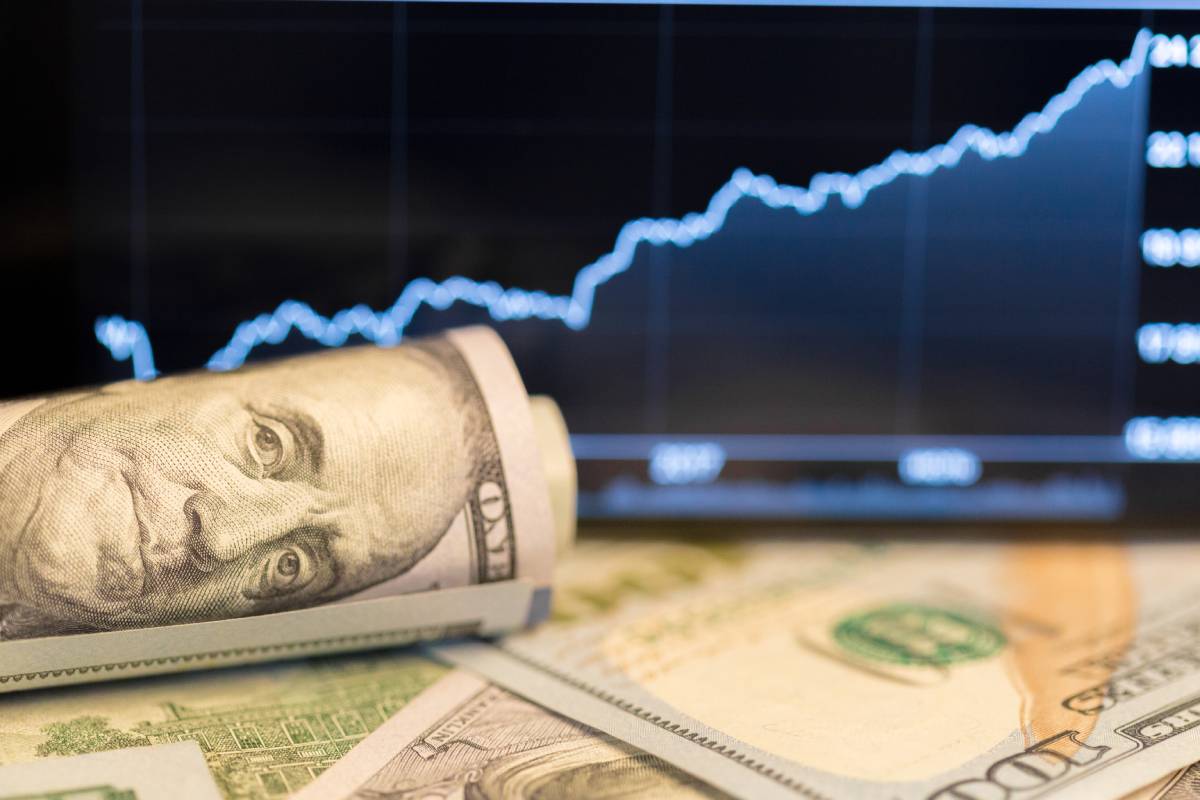 Inflation figures in the spotlight

In the United States, inflation is likely to reach another multi-decade high at 7.3 percent. Inflationary pressures are unlikely to ease in the short-term, and this will only increase the pressure on the U.S. central bank to accelerate its monetary policy normalization. A rate hike in March is highly likely despite recent weak economic data.

How will this impact the markets? The U.S. Dollar has been retreating lately, as other central banks are catching up with a hawkish turn. Risk sentiment has been improving as well, with equity markets slowly advancing following the recent stabilization. A strong CPI print is likely to benefit USD/JPY the most, as the Bank of Japan does not appear to be close to hiking rates.

Traders are keeping a close eye on the triangle consolidation. In the event of an upside triangle breakout, USD/JPY would be facing 115.50 resistance next. Should it overcome this hurdle, a retest of the 116.35 level would appear likely, with 118 the next major bull target after that. 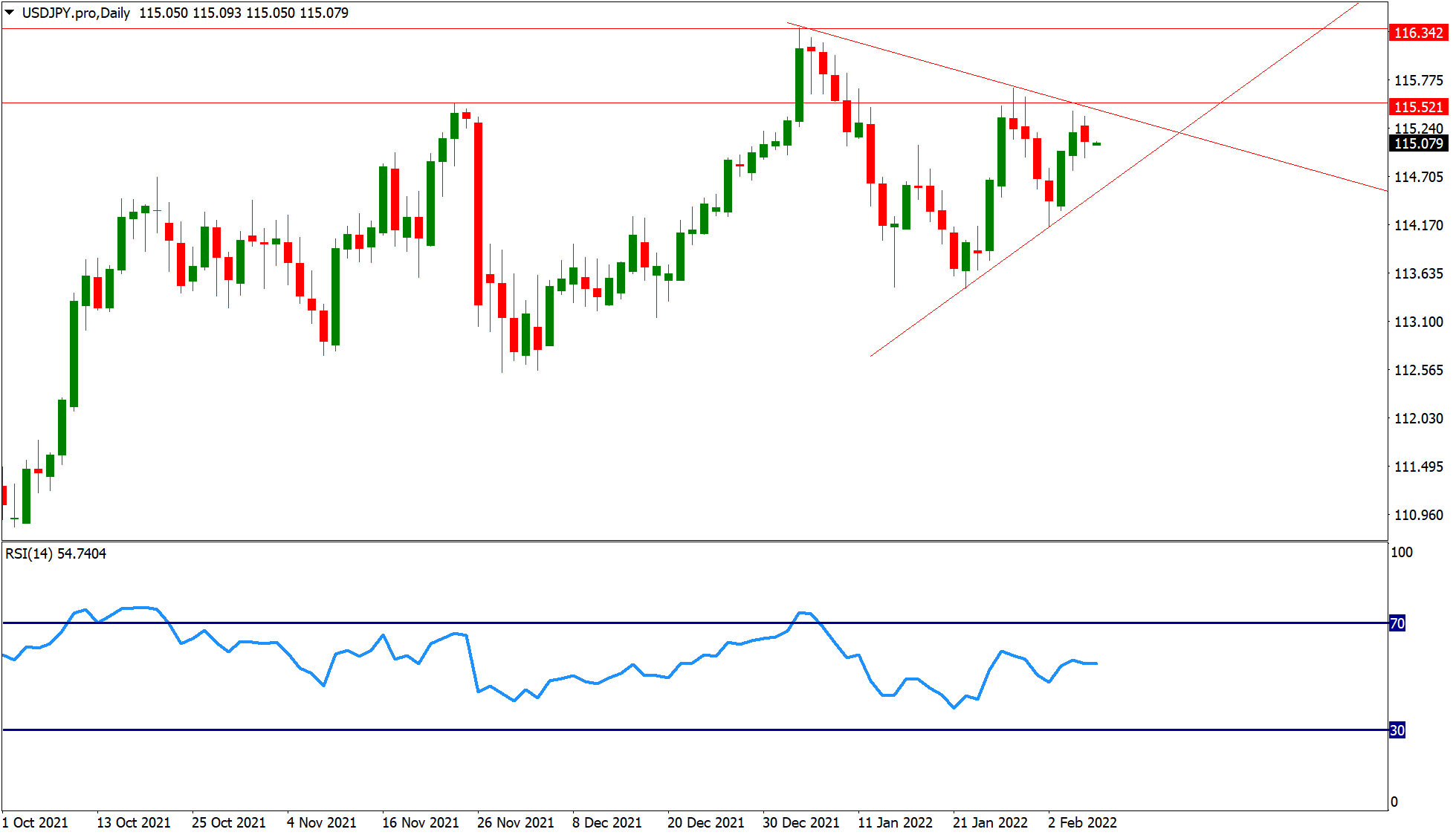 We’re more than halfway through the earnings season, and it certainly gave U.S equity markets a boost. But how sustainable is it? While revenues are strong across the board, most companies are beating estimates only slightly, and forecasts are more modest as uncertainties remain high. Rising inflation and a hawkish Fed are a combination that will keep pressure on the stock market intact, especially the technology sector.

USTECH´s recovery is standing on shaky legs, and Meta´s dramatic decline isn´t helping; the Facebook-parent´s stock price has decline more than 30 percent since the release of its latest earnings report last Wednesday.

Investors are closely watching the 14,384-support level. A clear break below could accelerate negative momentum and pave the way for a test of the January low at 13,711 points. 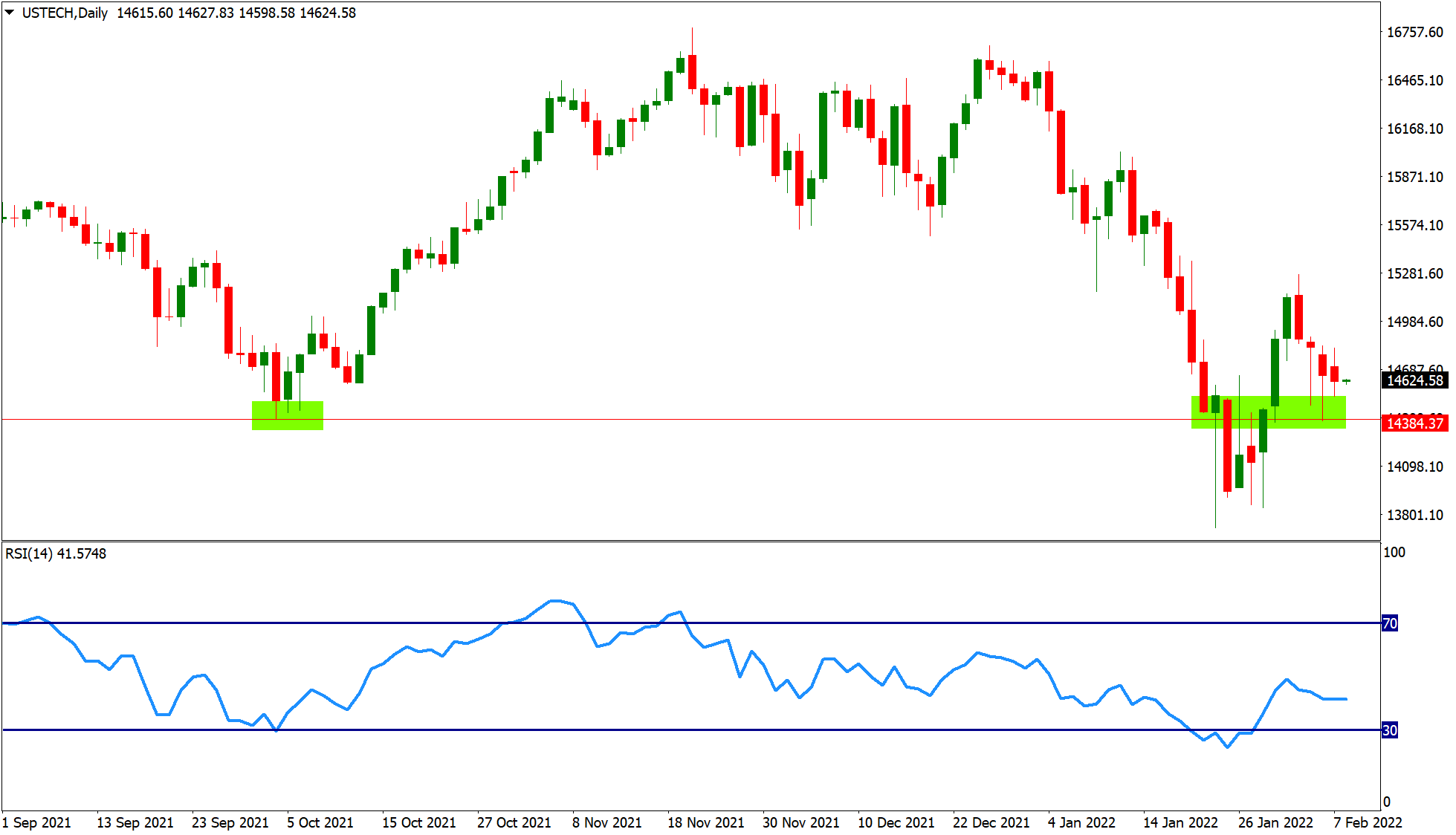 Following the BOE´s hawkish surprise last week, the British Pound is likely to advance further. EUR/GBP is starting to look overbought in the short-term and has run into major resistance the 50% Fibonacci of the October 2021–January 2022 decline at 0.8475. Imminent support is seen at 0.8425, and a break below this level would confirm that the downtrend remains firmly intact and bears still have the upper hand. 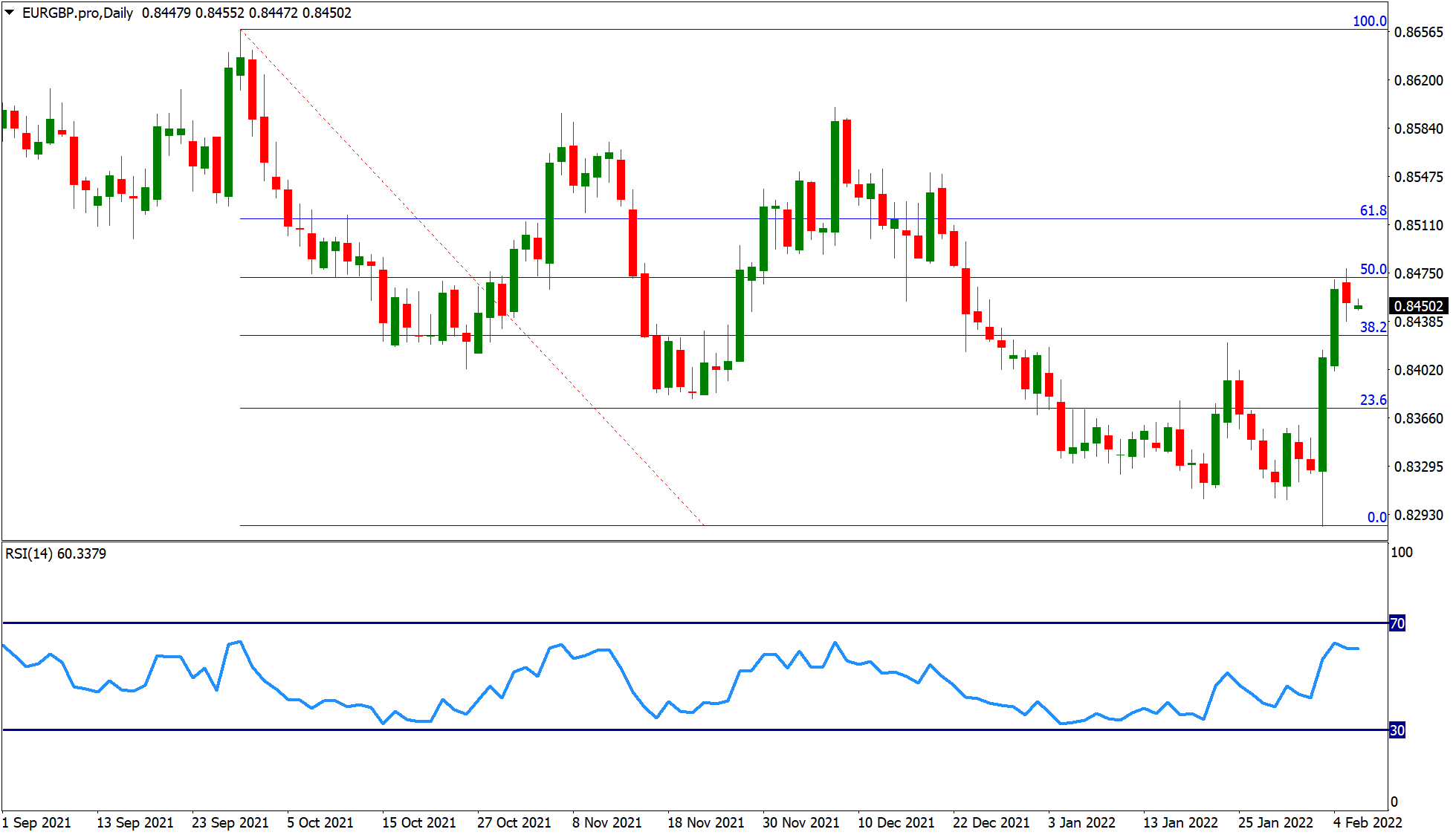 USOIL broke above the psychological resistance level at $90 last week. Oil demand remains strong, and despite OPEC+ agreeing to boost production, there are doubts that the group´s members will be able to stick to their promise. Ongoing Russia-Ukraine tension is another factor influencing the oil price.

The RSI on the daily chart is signaling overbought conditions, but fundamentals are hinting that oil´s price rally could still have some room to the upside. The key levels to watch for oil traders are $88.70, as well as the rising trendline from the December 2021 low. 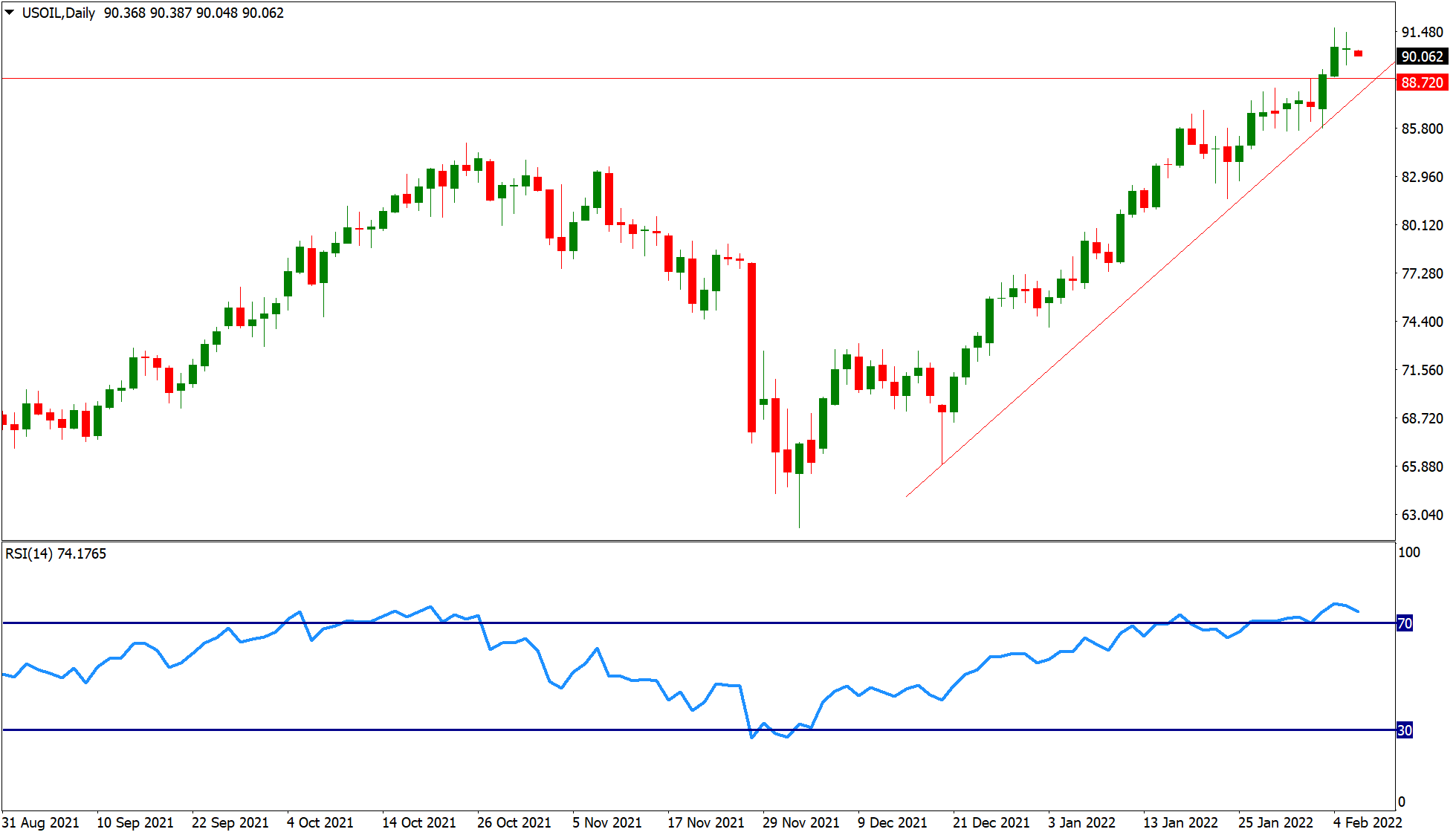