Home / Blog / Market Analysis / Asia Weekly: What Asia investors need to know for the week ahead

Asia Weekly: What Asia investors need to know for the week ahead

With the “Fed speak” blackout in the run-up to the September 17-18 FOMC meeting in place, the global economic calendar will hold centre stage.

Asia investors should keep an eye on Fridays US retail sales and the mid-week US inflation prints. With risks to the growth outlook dominating the Fed discussion of late, Wednesday's PPI and Thursday's CPI reports might get the curt treatment as the markets have bigger fish to fry on the Trade War front. However, these reports can still influence the yield curve beyond September and could be impactful on Gold and the US dollar action if the deltas to expectations are significant.

The European Central Bank (ECB) policy meeting occurs on Thursday where the markets are expecting a substantial easing package. Early last week however MNI market news wire reported that its sources say the ECB will launch QE of EUR20-30 bn, cut rates (-10bp most likely, -20bp possible), add tiering, and make forward guidance more dovish. One of the sources said that the ECB would not use all its firepower in September, hence the lower-than-expected monthly rate. Also, for now, it will stick to existing issuer limits. The debate would seem to lie in just how deep the ECB wants to move below the Zero Lower Bound (ZLB)

Key dates and events on the ASEAN Docket

The Yuan remains at the epicentre of regional currency markets where the Peoples Bank of China (Pboc) is beefing up the countercyclical measure to avoid at all cost any negative fall out from the US Treasury that they are attempting to weaponize the Yuan as a tariff offset and to defend against possible capital outflows a weaker Yuan could trigger. In the past, when Chinese investors get nervous about Yuan weakness, they move assets out of China, and these capital outflows have historically been hugely damaging for regional equity and bond market sentiment.

Chart of the Week ahead

The chart below puts the USDCNH influence on regional currencies in perspective: 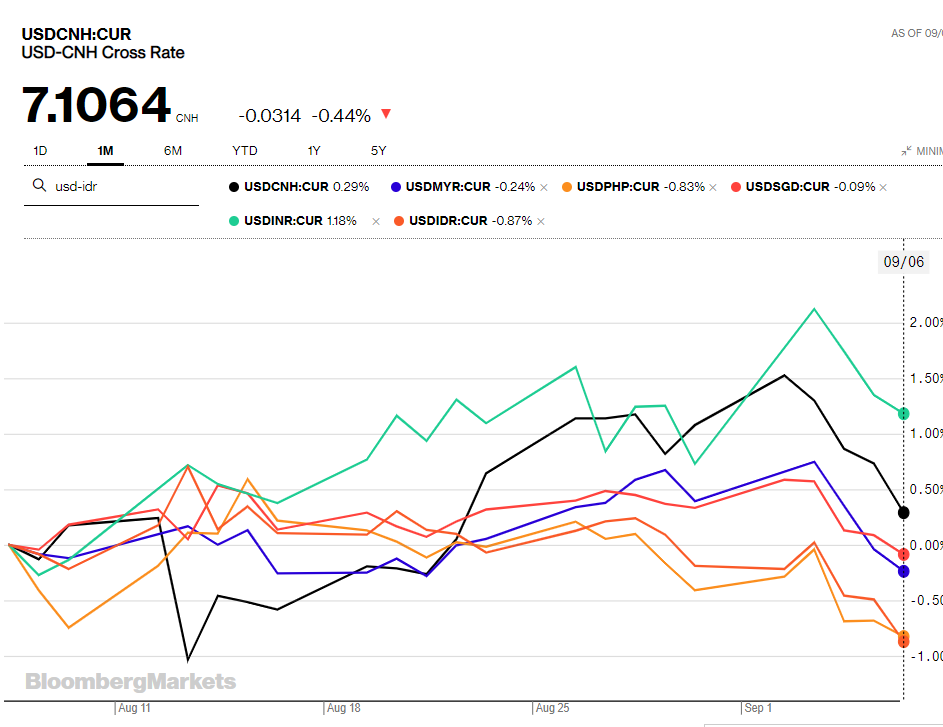 The markets expect 'China's CPI inflation to cool slightly to 2.6% in August from 2.8% in July, while PPI inflation falls further into the negative territory, to -0.8% from -0.3% in the same period.

Lower inflation will be another sign of weak demand in the 'world's second-largest economy.

China is a crucial driver of global growth, and especially in Europe, so negative domestic data prints tend to leave a global footprint. So, when China sneezes the rest of the world does catch the flu.

Analysts expect the Philippines is likely to report slower export growth of 2% in July vs. 3.3% in June. Although regional countries like the Philippines and Vietnam have been picking up the trade slack from China after the US imposed trade tariffs, the year-long global economic drag is expected to bog down Philippines exports

Bank Negara Malaysia (BNM) and their monetary policy committee members meet on September 12. With the market leaning to one of two dovish expectations of either delivering a 25bps rate cut or a dovish hold while signalling a rate cut in the future. Despite GDP growth surprising to the upside in Q2 and an equally nonplus resilient export sectors, the BNM has continued to flag economic contraction through mid-2020 suggesting that a near term rate cut is in the offing.

With regional currency traders thought to be focusing on growth rather than interest rate differentials, the event impact is believed to be mute as the local currency market continues to march to the beat of the Yuan as the Pboc who attempts to temper Yuan weakness by setting the daily Yuan “fix“ stronger.

China’s decisive intervention on the Yuan is having a soothing effect across ASEAN currency markets while holding the bullish US dollar at bay.

The market consensus suggests Singapore's retail sales are likely to fall at a slower pace of 1.5% in July vs. 8.9% in June, supported by favourable base effects.

Private-sector economists have sharply lowered their growth forecasts for the economy this year. Singapore is an open economy and extremely sensitive to external affairs, particularly around trade war. So local investors heaved a sigh of relief when reports surfaced late last week that the US and China are getting back to the negotiating table.

Analysts expect India's CPI inflation is likely to rise to 3.4% in August from 3.2% in July, weak fundamental data (with GDP growth sharply to the downside to 5% in April-June from 5.8% previously) point to further monetary easing by the Reserve Bank of India (RBI) ahead

Indian Finance Minister Nirmala Sitharaman on Friday said inflation is entirely under control and that it has not risen since 2014.

"Inflation is absolutely under control. Nobody can question our government on inflation. Inflation has not risen since 2014. “

Markets expect next weeks growth data to contract with India's Industrial growth to slow to 1% in July from 2% in June, while its exports are expected to contract 3.6% in August, vs 3.2% growth reported in July. Indeed, this too supports the markets consensus view for an RBI rate cut. 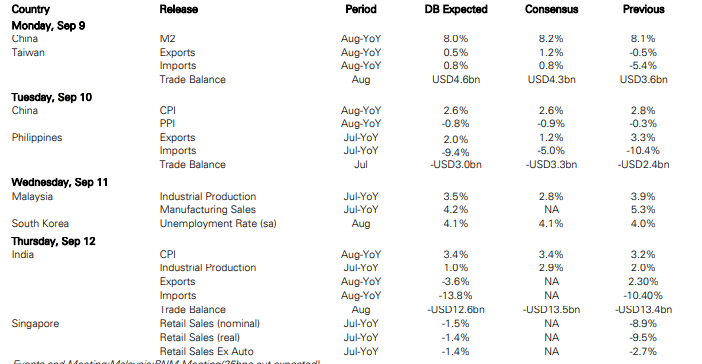