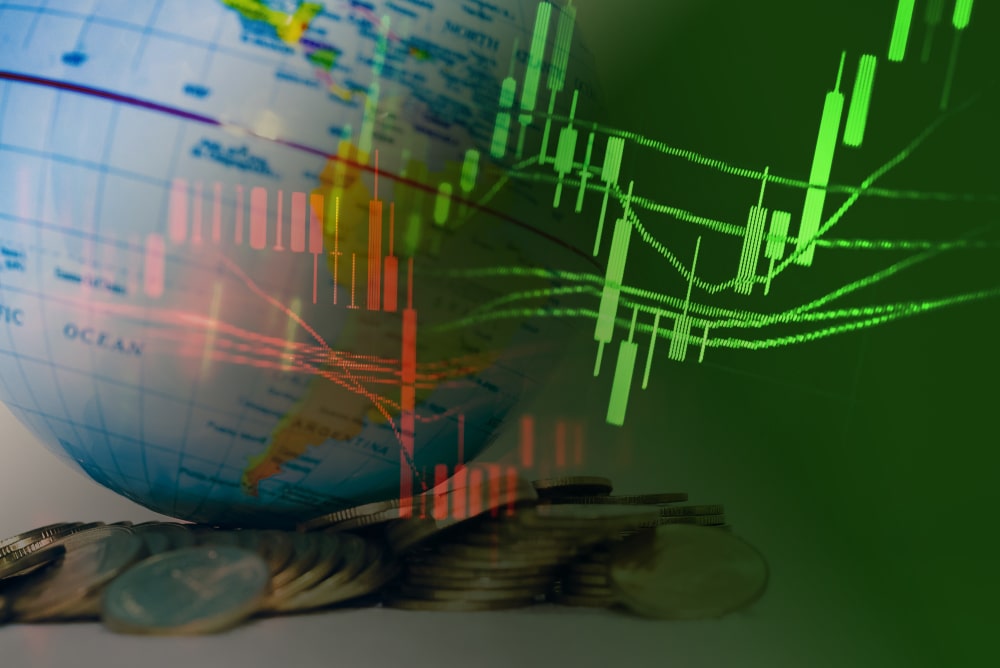 Expectations for a globally coordinated monetary policy stimulus are driving a rebound in risk sentiment.

The S&P500 is up a bit over 2% heading into the close while the Stoxx600 closed up 0.1% in Europe, the UK FTSE was up over 1% and most Asian bourses were better as well – notably the Shanghai composite up 3.3%.

Fixed income rallied further, however, U.S. 10Y yields were down 4bps to 1.11%, although growing expectations of Fed easing have seen the yield curve steepen again. Oil recovered almost 5%, while gold is down a bit.

The much-improved sentiment came on Monday after the Bank of Japan fed off the Federal Reserve Board’s lead on hinting at policy support, stating that it will "strive to provide ample liquidity and ensure stability."

However, the ECB refrained from offering a similar backstop of support. Still, European central bankers nonetheless sought to calm nerves Monday when ECB Vice President Luis de Guindos noted that the virus adds a "new layer of uncertainty" but that there is "not yet a widespread slowdown in consumption."

G7 finance ministers and central bankers are planning a call from Tuesday to Wednesday to weigh a response to the virus. The conference call is scheduled for 1200 GMT (7 a.m. EST), two and a half hours before U.S. stock markets open.

While it would be easy to deride news of a conference call, it’s a good sign of potential action to come and should bring some stability to markets and would suggest we're moving beyond verbal intervention as global policymakers want to get in front of the virus's economic carnage through the framework of policy action, including the ECB, BoJ, BoE and SNB.

Indeed, the market is forcing the Fed’s hands at this stage with a full 50bp cut priced for the FOMC meeting in March, with about a 60% probability of the move coming early.

Some commentators have been questioning whether monetary policy can be helpful, primarily focusing on two rhetorical questions: 1) How does a rate cut relieve a global supply shock? and 2) Will rate cuts boost the service economy and get people back on airplanes to Milan and cruise ships from Venice port to St Marks harbour? Probably not, but the market meltdown last week risked spiraling out of control.

Central banks can stop such spirals and the Fed and BoJ have demonstrated that it can work by merely hinting at it. However, the policy shock and awe impulse needs to be delivered quickly to have the highest market impact. Supply-side driven economic disruption is different and monetary policy is much less powerful there. Instead, governments will have to take fiscal action, as has started to happen in Italy and Hong Kong, for example.

Oil markets ripped higher out of the gates in early Asian trading on hopes for a double dipper policy deluge. The air is rife with expectations that G-7 finance ministers and central bankers will move to prop up financial markets and that OPEC will tighten the reigns on supplies in response to the virus-driven demand shock.

Futures in New York rose 2.3%, after gaining 4.5% on Monday, to break a six-session losing run. G-7 finance ministers and central bankers will hold a global teleconference later on Tuesday to discuss their response to the coronavirus outbreak, while the market continues dancing to the bullish tune expecting OPEC and allied producers to commit to deeper output cuts when they meet in Vienna later this week.

For the time being, short-covering remains the flavor of the day. Either of these interventions alone might have a milder impact on oil prices, but the combination of both does challenge the current sell first, ask questions later, Covid playbook. This is setting up to be a massive battle of the "Policy Bulls very the Covid Bears."

Gold is caught in a policy tango, getting tugged to and fro between the monetary policy deluge and the frothy risk-on sentiment. But it's hard to ignore the bullish fundamental, which suggests gold's uptrend will resume before long. It's not the easiest of trades to time as last week's wicked decline may have a lasting negative impact on investors.

Sentiment has been dented not from the intensity of the sell-off but rather the breadth of the sell off relative to the fundamental drivers, most notably risk-free yields, which plummeted. Falling UST yields usually is a hugely bullish signal for gold, which these days is getting driven as much by sentiment as it is fundamental. While at this stage the 1566 level will hold as longer-term buyers on dip have remained consistent so far, the $1560-1565 /oz level needs to be respected as an aggressive sell-through could trigger another wave of intense liquidation as EFT positions remain thick with the bulk of the recent purchases well underwater.

For the first time in two years, I think the market is finally feeling comfortable enough to abundantly run short dollars, and indeed, price action doesn't foretell any significant sign of awkwardness although we are trading off the recent EURUSD tops. The Fed will cut 50 bp, maybe even today, and this time it will do significant damage to the dollar, sending vols higher and surely squeeze the remaining Euro shorts out of the park. But this is by design as the policy market will uniformly accept a weaker USD as King dollar presents one of the most significant headwinds to global risk markets.

But I think this policy shift opens up a panacea of opportunity for the dollar bears with sights on 1.1500 EURUSD and a possible extension to 1.200. Clearly, higher volatility is here to stay for the near to medium terms and will likely squeeze the Euro shorts out of existence as the Euro goes for the best to the worst funder. The US election risk will continue to send jitters through US capital markets, while the probability of a European fiscal response to the Coronavirus is rising exponentially

The Australian Dollar: my trade of the day (and yesterday)

With the G7 central banks and governments talking, Asian currencies are ripping higher again and the Aussie catch up trade beckons once again.

The RBA meets today. This makes the market nervous about a possible dovish pivot and swoosh lower if the RBA cuts 50 basis points, or hints at future credit easing or Q.E. A 25-basis point cut is more than fully priced in and I don’t think 50 is in the cards. I would think "no-cut" is higher odds than "50 bps cut", though both are less than 3% in my view.

There was a monster Friday, which was the highest volume day for AUD since late 2016. So, the market is well short into the meeting and with a concerted global policy shift expected to do much of the heavy lifting, the RBA can keep some powder dry. And with a whopping cumulative rate cut expectation priced into both the March 3 and April 7 RBA meetings, Aussie shorts are fragile to an RBA buoyant post rate cut statement. Risk rewards are starting to look more bullish for the Asia growth beta Aussie dollar comeback.

It’s BNM decision day which usually sees a pullback in volumes, but with the dollar bears out in full force in G-10 and oil prices ripping higher overnight, the Ringgit could be setting up for a decent rebound trade this week

As the coronavirus situation improves in China, one might logically think that there would be a first in, first out turn for the currencies. The Asian currencies that were pounded in February should rebound somewhat as the story in China improves relative to the rest of the world.

History of past coordinated actions:

And here’s a great piece from the Bank of Canada on “a chronology of crisis response measures.”