A volatile session in US equities, albeit one characterized by more red. The S&P500 has waxed and waned in negative territory and is down around 2.7% heading into the close.

European equities were down more than 3%, Japan off 2.1%. The Shanghai composite was a notable exception yesterday, rising 0.3%. That relative outperformance speaks perhaps to the global spread of the virus just as the outbreak in China shows early signs of stabilizing.

But citing a "pandemic potential" – the WHO now classes that global spread as their "greatest concern" – it’s scared the bejeebers out of the markets.

Yesterday the market's most significant concern was the virus showing up on the US market doorstep. But today it's fear and the particularly disturbing whirling sounds emanating from the machines in Secaucus NJ as systematic funds algorithms rev up as the markets begin to place bets if and when 90 trillion in global GDP starts to go up in flames.

And while the panic pockets have been relatively small up until this stage, with "Valmageddon" setting in and the systematic machine strategies in NY4 abuzz again, watch for unprecedented levels of systematic risk control and CTA selling kicking in. Indeed, buying the dip in equities doesn't sound like too bright of an idea this morning.

And perhaps the only thing preventing the SPX trap door from springing is the thought of a Fed circuit breaker kicking in that might block the market from crashing even more. A 10% decline in equities, if sustained, is equivalent to about a 14bp rate increase in terms of the drag it exerts on US growth. A cumulative equity fall of 16-17% would exert a negative pull on growth equivalent to nearly a 25bp rate hike. The unprecedented level of chatter about an emergency rate cut coming out soon, which incidentally is my base case scenario in a super spreader event, could put a floor on the declines. But if inter-dealer message boards are a sign of things to come, it's shaping up to be a Frightening Friday ahead of a Spooky Saturday when China manufacturing PMI data is released.

Other than Fed intervention for risky assets to recover, the burden of responsibility has shifted to the point where virus-related data must make a U-turn triggering a retrenchment of the economic risks. This is a dramatic departure from a little over a week ago when the virus data had to make a case for why traders and investors should not hold risk. Now it’s shoot first ask questions later.

All eyes are on this one and for good reason.

There, the Covid19 rapid spread scenario has created a potentially massive negative feedback loop for US stocks and the USD. The most prominent position in the world (other than long gold) is probably still short EURUSD, as that’s been a core CTA and real money position for more than a year and specs added massively at the lows on the USD Yankee bullish fever. The worse things get, the better the odds of the end of "BLACK ZERO." 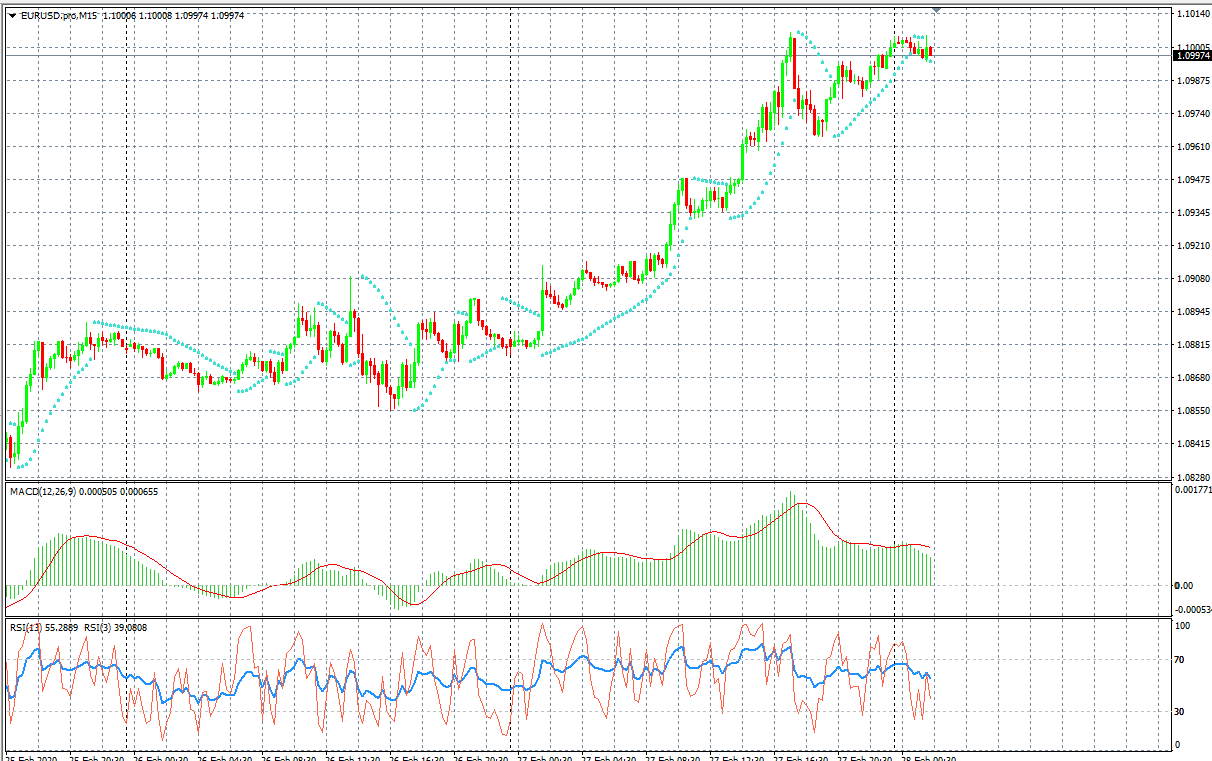 The EURUSD is flyboarding higher on the combination of the continued unwind of EURO funded carry trades, particularly against the once heavily subscribed short EURMXN and as what was only last week a towering stack of "Euro put options" has flipped to a towering pile of "Euro call option" as the G-10 markets waxes dovish the FOMC rate curve.

EUR buying is emerging as a clear theme, and the bias is expected to continue with hedge funds backing up the truck to unwind and reverse short Euro positions.

The Australian and New Zealand spots seem caught in between the equity market sell-off and the melting US yields. But the spot markets are higher on the day despite the heavily risk-off mood in markets. Nevertheless, vols are higher on the day by about .25 across the curve. And in a case of "where there's smoke, there's fire", risk reversals are also bid as the market continues to believe AUSUSD ultimately has to sell-off amid continued stress in the markets. 1m 25d traded 1.15 in size today.

So long as the PBoC anchors the Yuan, life is good in Asia FX.

But with the market now pricing that an economic recovery will come sooner in China/Asia, there's now rotation of US assets into Asia, which is supporting Asian FX. The market is still in desperate need of US dollars, but they need them at much cheaper levels so they’re hoping that a Fed emergency rate could be what the doctor ordered.

Frankly, I'm not falling head over heels on this trade as I cringe at the thought of taking on risk near the epicenter of the issue while ignoring the fact of a massive wave of secondary outbreaks.

I could have just put my Monday oil commentary on a loop this week: "The World is getting Spooky" and "We should not underestimate the economic disruption as a super spreader could trigger a massive drop in business activity around the globe of proportions the world has never dealt with before".

News that Saudi Arabia is moving to cut March oil supplies to China by at least 500,000 barrels per day have apparently prompted a "renewed commitment" in the allies “to build a consensus for joint action in mitigating the current hyper volatility in the market", Secretary-General Mohammed Barkindo said. Sure, this lip service has provided a modicum of support, but is it a day late and a penny short as, with Saudi Arabia trimming exports to China, the impact can be adequately quantified. On any level, this news is not good.

Markets moved sharply lower overnight, with equity futures and oil prices falling further as oil prices are moving tangentially to news flows around the deluge of secondary cluster outbreaks. And for the oil market, none are more worrying than those reports emanating from the US market which is the biggest consumer of oil on the planet by a long shot.

WTI has a sub $45 stamped all over it before the US shale producer self-correcting supply mechanism kicks in when US wells go offline due to breakeven concerns, so while there’s probably some downside juice to be squeezed the sentiment-crushing sell-off could temper somewhat when factoring in the apparent OPEC call to action.

China's manufacturing PMI for February is expected to fall to 45, the lowest level since the global financial crisis. China is the biggest driver of year-on-year demand growth, and confirmation of a weaker economy will weigh on sentiment for oil.

But here’s the thing: it's extraordinary that the market is pricing in 45 when China’s colossal manufacturing complex has been shuttered for a month andthe lights in China's industrial heartland are starting to flicker.

There is no denying gold's "haven" credentials are getting questioned in light of gold's tepid performance, with nary a bounce in sight. It should be particularly worrying for gold bulls with Treasury yields collapsing, which should have been extremely positive for gold. And the fear index is moving off the red side of the charts.

Risk-free sovereign assets, not gold, is the preference of choice as cross-asset investors grow concerned about the considerable drop in physical demand since the virus hit. So, the bearish aspect of reduced consumer demand amid the economic slowdown could be depressing prices as physical does remain a significant demand channel.

At this stage, given the multitude of correlations, the suggestion is that gold will eventually win the day. It remains a buy on dips given the current backdrop, but intraday volatility is making for challenging conditions at times. Expect support at $1,620 before $1,600; a daily close below $1,580 would be a bit of a trap door event, I would think. But for that to happen, it might take an unlikely U-turn on the virus spread headcount to spook investors out of their long gold position.