A peek into cryptos and tech stocks 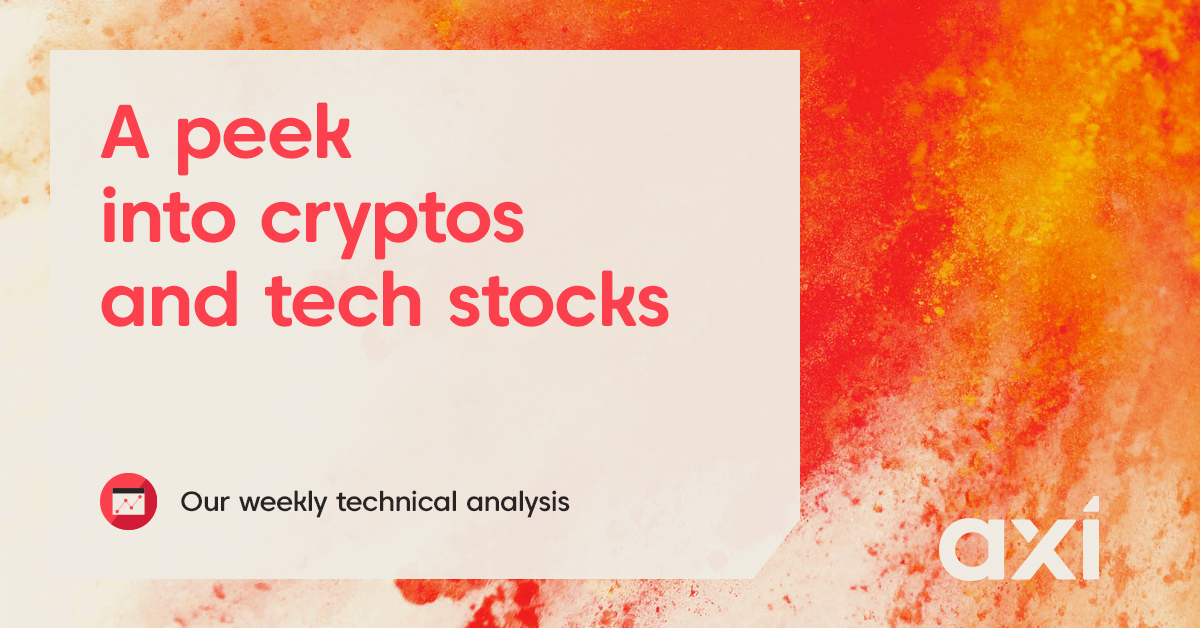 With the economic calendar for the upcoming trading week appearing relatively light on significant events, following some big moves, we could see a short period of consolidation in the FX market and traders shifting their focus to the record-breaking stock market, as well as cryptocurrencies.

Stocks: more room to the upside

The Federal Reserve announced last week that it will start to reduce its monthly bond purchases later this month; this didn’t come as a surprise, but the central bank sounded far less hawkish than the market was anticipating.

Equity markets regained momentum following a strong earnings season, and the Fed reiterating that it sees inflationary pressures as temporary and that a rate hike immediately after the tapering process has been completed is not guaranteed, is exactly the news stock bulls needed to hear.

Inflation continues to run hot. This – along with the Fed potentially being forced to hike rates abruptly – remains a concern for investors. However, investors don´t see it as an imminent threat and risk appetite remains high.

Tech stocks remain particularly attractive to investors, with heavyweight Tesla recently reaching the $1 trillion dollar cap. The charts are suggesting that the USTECH index is overbought, however, momentum is running strong and as long as the index can keep itself above the 16k level, bulls remain firmly in control. Further gains remain likely, with 16.5k the next notable hurdle to overcome.

Amazon managed to briefly break above a major resistance level at $3550 on Friday. A daily close above this level would hint at the end of the current consolidation phase and make a retest of the all-time high at $3773 likely. The Daily RSI is not signaling overbought conditions yet, leaving more room to the upside.

On the other hand, Tesla does look heavily overbought on pretty much all timeframes, and a pullback would be healthy for the sustainability of the rally. Traders will be keeping a close eye on the $1093-1116 support area, where the stock should be able to catch a bid again in case of a retracement.

European equities are catching up

European equity markets lagged their U.S. peers for a long time but managed to gain significant momentum in the past few weeks. With the ECB nowhere near a rate hike, investors don´t see an alternative to the stock market and risk appetite remains high.

The GER30 reached a fresh record high recently, but the Daily RSI is not hinting at overbought conditions yet. Strong support is noted between 15,800 and 15,850 points and the index is likely to bounce off that area should we indeed see a minor pullback.

Cryptocurrencies: is end of consolidation nearing?

Altcoins have stolen the show from Bitcoin & Co recently, with some spectacular rallies seen in the altcoin space. Nevertheless, traders should keep an eye on the mainstream coins as the end of a consolidation phase seems to be approaching. The surge in interest in cryptocurrencies in general is poised to benefit the largest coins too.

BTC has been consolidating within a triangle for the past few weeks, but a breakout could follow sooner than expected. To the downside, key support is noted at $57,636. Given the bullish sentiment in the broader market, chances are good that BTC will be able to catch a bid ahead of this level. To the topside, the key obstacle for BTC bulls remains $64,173 followed by the all-time high near $67k.

Looking at ETH/USD, traders will be keeping a close eye on $4366 support, followed by the rising trendline from the September low.

Omicron keeps the markets on its toes

Despite much uncertainty about the potential impact of a new coronavirus variant, investors were quick to rush to safe havens

It’s not the news markets want to hear, but lockdowns are back

While markets have shrugged off the pandemic for much of 2021, renewed lockdowns in Europe now have investors concerned