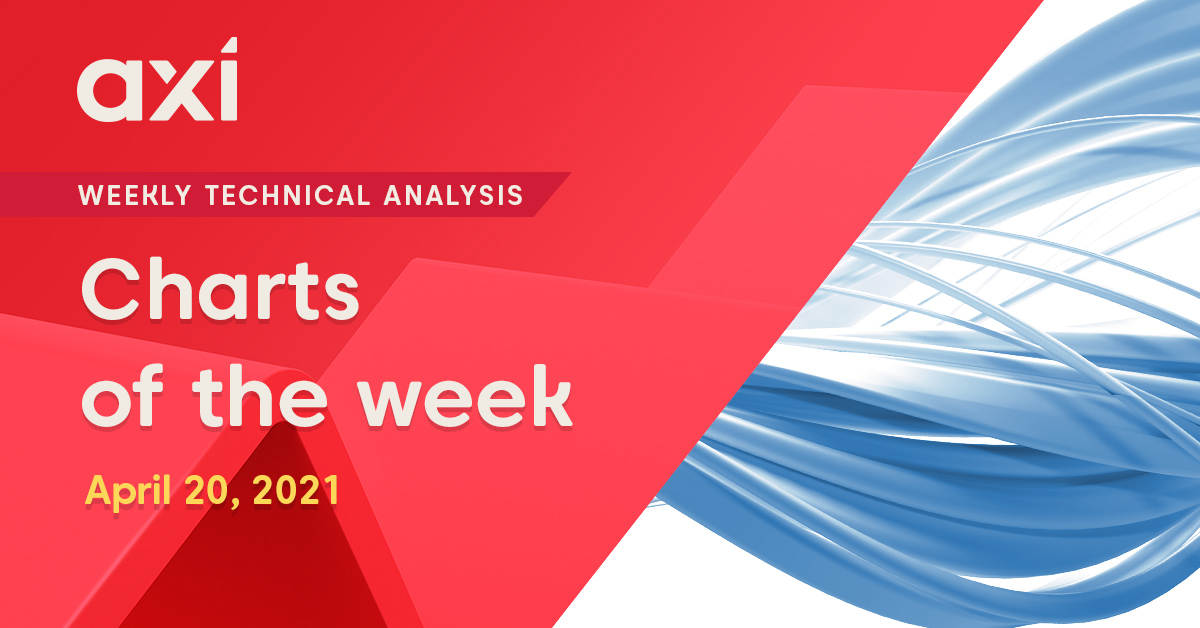 In this edition of “Charts of the Week”, we will have a look at precious metals where the short-term outlook has turned brighter, as well as Bitcoin which is going through a major sell-off right now, followed by Oil – which is finally on the move after days of consolidation – and two major currency pairs.

Gold recently cleared a major level of resistance at $1750, which confirmed the double bottom pattern at $1677 and paved the way for further gains. Gold bulls are now aiming at $1851, which is the 61.8 Fibonacci of the January-March decline and close to the 200 DMA. Given the broad Dollar weakness, this appears to be achievable, although rising risk appetite in global markets might cap the topside near that level. To the downside, $1750 will be the key level for Gold to defend, as a break beneath could signal a false breakout and potential retest of $1677 support.

Technicals are looking slightly more favorable for Silver, which recently broke above a major trendline resistance as well as the 200 DMA. $26.65 will be the next challenge for Silver bulls.

Bitcoin is seeing another sell-off, just a few days after it hit a new record high. The Coinbase IPO triggered a euphoria that sent BTC rallying, but investors have started to sober up over the weekend, and with some seeing the rally as stretched, headed for the exit door. There were also rumors about tighter regulation of cryptocurrencies, which did not help either. BTC traders are now looking at how deep the correction could be. Considering the significant gains in the recent few months, and that there has not been a major sell-off in a while, there is scope for a deeper correction this time as more investors prefer to cash in. The next key support level to watch is $50k - which is also a key psychological level for many BTC investors. A break below that figure could trigger an acceleration of the downside momentum and pave the way for a move to $44k, which is near the February low.

USOIL has been consolidating in the past few weeks, but traders are getting increasingly optimistic and the next leg higher appears to be close. Global economic data is hinting at a healthy recovery and oil demand is set to rise further in the near-term. At the same time, the supporting measures by OPEC+ are giving Oil an additional boost, and prevented a deeper correction during February/March. With the recent breakout above $62.20/25, Oil traders are now eyeing the big $68 resistance level again, and the Daily RSI is showing that Oil is far from being overbought, with more room to the upside.

The Dollar is under pressure across the board. USD/JPY has been hit hard, as crowded positioning accelerated the sell-off. 108.30-109.30 was a key support area to watch, and the currency pair recently broke below it. This signals that there is more room to the downside, with 106.60-90 (which also contains the 50 % Fibo of the January-March rally) the next major area to keep an eye on, followed by the 200 DMA around 105.80. The RSI on the hourly charts is suggesting slightly oversold conditions in the near-term, but any bounce back is likely to be limited to 108.90/109.00, after which a continuation of the correction could follow.

Another currency that could be benefiting from the current Greenback weakness and rising risk appetite is the Australian Dollar. Generally seen as risk-on currency, AUD has been recovering in recent days, and with the broader uptrend still intact, further gains appear likely in the near-term. AUD bulls are aiming at 0.7850 resistance as next target, after which another test of the big 0.80 level would almost seem inevitable.