USD ended last week with firm data prints, but this seems not enough to stop the Fed from cutting at least 25 bps. During last week, the U.S. Consumer Price Index for June came in stronger than market expectations. The headline printed at 0.1% m/m and 1.6% y/y, and core came in at 0.3% m/m and 2.1% y/y. Gains were broad-based across the components. Then, the US June PPI was firmer than expected (+0.3%m/m and +2.3%y/y ex-food and energy, est. +0.2%m/m, +2.1%y/y) - another sign that the U.S. is not at risk of a deflationary slide. The data are hot on the heels of Fed Chair Powell’s testimony to Congress in the week where he expressed concerns that weak inflation will be even more persistent and be a drag on inflation expectations.
Last Friday, Chicago Fed President Evans (usually dovish, voter this year) was arguing that the weak macro picture in the global economy warranted a rate cut. Richmond Fed president Barkin (non-voter, recently a touch hawkish) also cautioned around the downside risks to the U.S. economy - Markets continued to price 30bp of easing at the July meeting. Later this week comes retail sales data in the U.S. and a slew of speeches by policymakers, including Federal Reserve Chairman Jerome Powell. Retails sales data is likely to show robust growth and can support USD well. USD is likely to be traded sideways this week as investors reflect on robust domestic data and dovish Fed.

Pound tumbled to lows seen in the aftermath of the 2016 Brexit referendum fueled by Brexit uncertainty amid the general elections for the next Prime Minister. With Jeremy Hunt and Boris Johnson coming in as the top contenders to succeed May, investors are pricing in further downside for Sterling as risks of no-deal Brexit increases with both candidates showing unwavering resolve to deliver Brexit by 31 October.

Meanwhile, soft economic data with last week's Manufacturing and Industrial Production recording a 1.4% growth, falling short of 2.1% and 1.5% growth estimates respectively, put the currency under renewed pressure. Elsewhere, investors are also pricing in the possibility of an interest rate cut by the BOE in the event of an unmanaged Brexit adding to its decline. Looking ahead, investors will be keeping a close watch on the average earnings, retail price index, producer price index and consumer price index data, where missing expectations could add on to the bearish pressure. 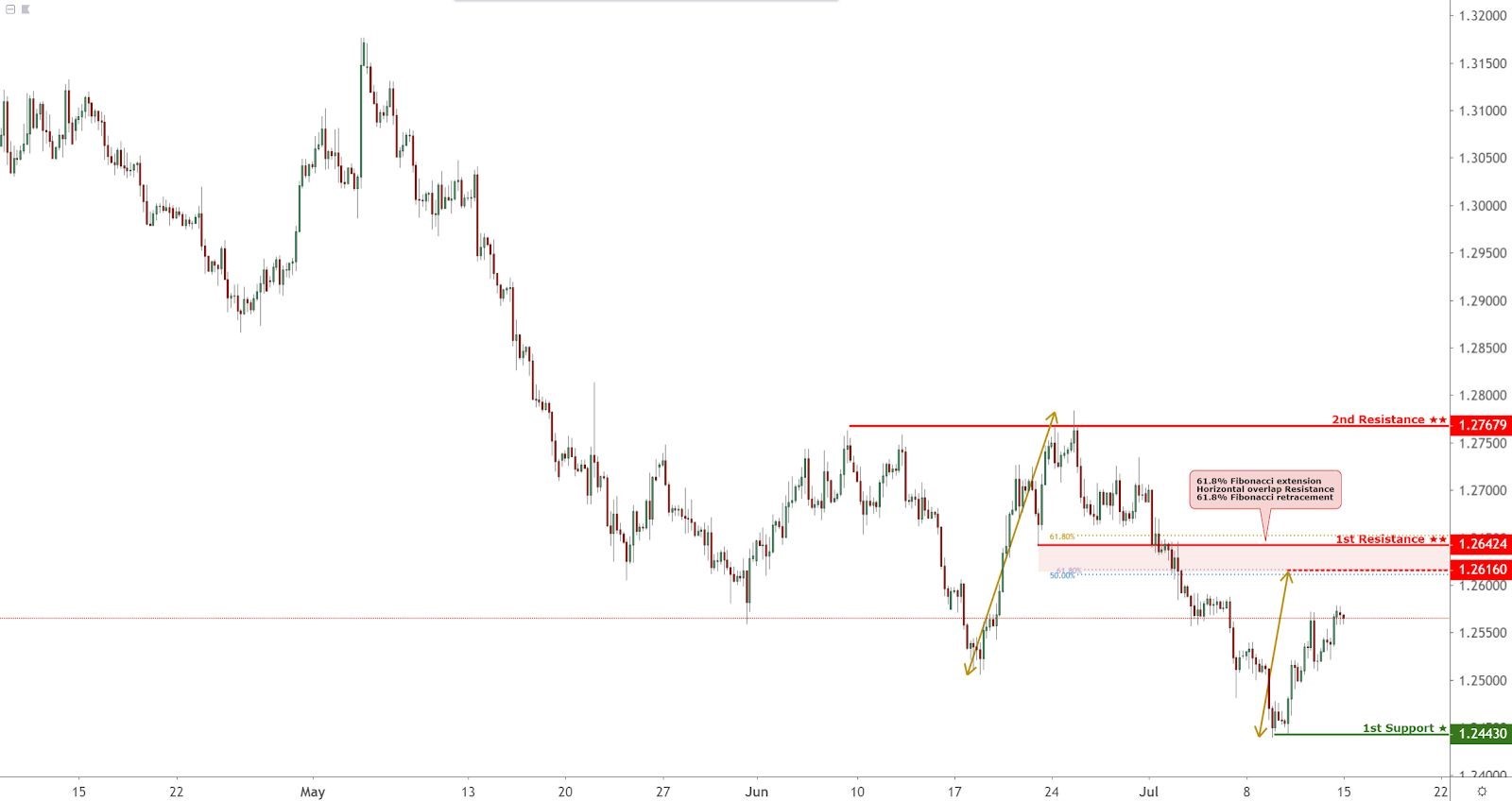 GBPUSD is approaching strong resistance at 1.2642 area (61.8% Fibonacci retracement, extension and pullback resistance). The next resistance is up at 1.2767 which is a horizontal swing high resistance level. Support is down at 1.2443 which is a swing low support.

AxiTrader allows you to trade the Pound against the US Dollar (GBPUSD) as a CFD.

EUR advanced against the greenback hitting a week's high amid a broad dollar weakness as Jerome Powell signaled a Fed rate cut in July. On the data front, the currency drew support from the strong performance of Spain's CPI and Eurozone industrial production data, recording a 1.5% and 0.9% growth, exceeding expectations of a 1.3% and 0.2% growth respectively, fueling recent gains. This week will see the release of ZEW survey economic sentiment and CPI numbers which could put the currency under renewed pressure if numbers fall short of estimates. 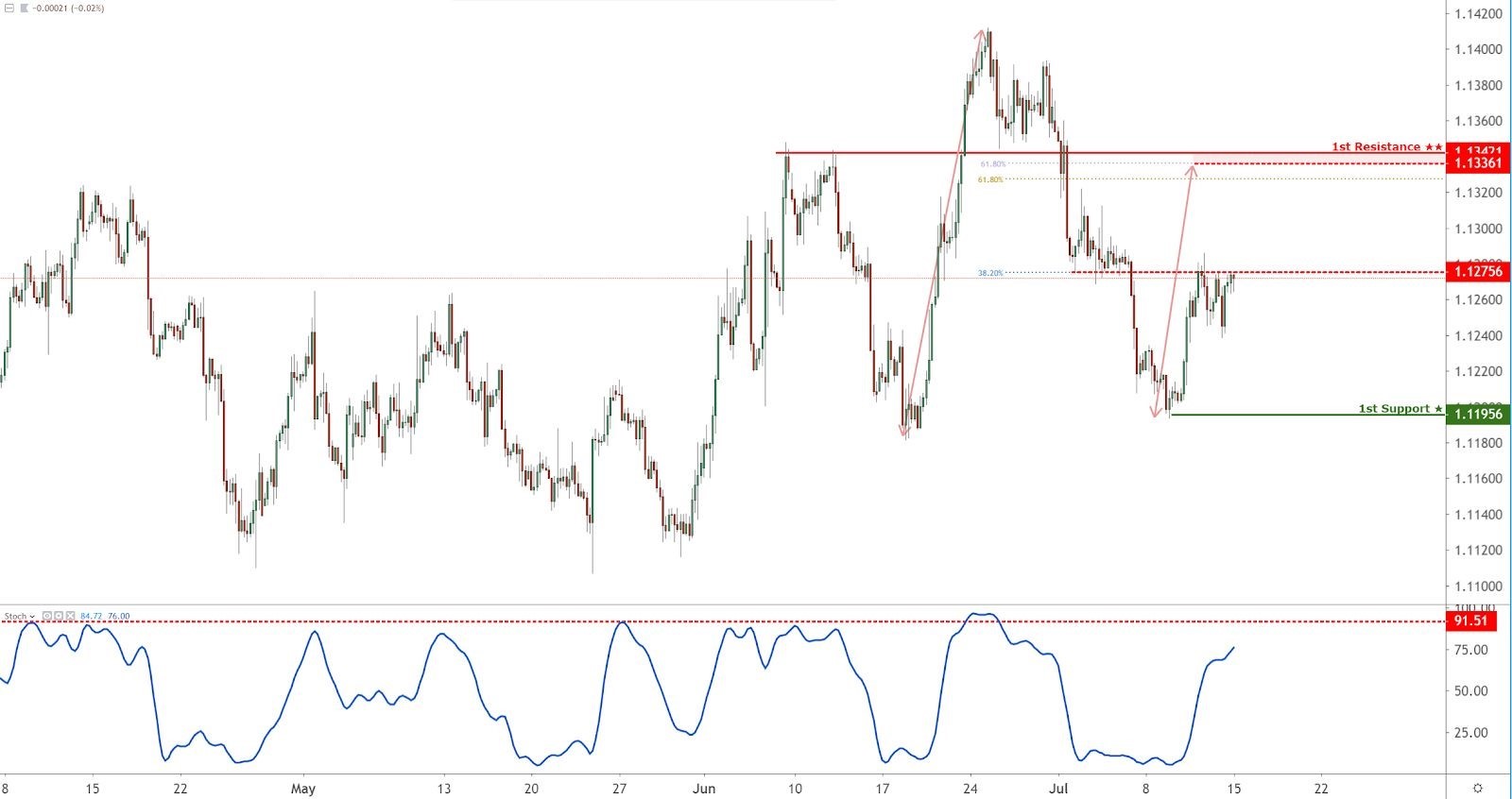 There won’t be economic releases in Japan at the beginning of the week as the country celebrates a holiday, which will keep financial institutions closed. Earlier on Monday, Chinese growth moderated to 6.2% from 6.4% in the first quarter and analysts say any weakening will increase the urgency for policymakers to step up fiscal and monetary support. However, the result came in line with analysts polled by Reuters. The result boosted AUD since the data relieved the market’s concern over the shadow that the trade war has cast on China’s growth. After all, 6.2% is still a fantastic number for China. However, the risk appetite remains mixed with the trade war tensions remaining. Later this week comes retail sales data in the U.S. and a slew of speeches by policymakers including Federal Reserve Chairman Jerome Powell. JPY is likely to move sideways amid the mixed risk appetite. 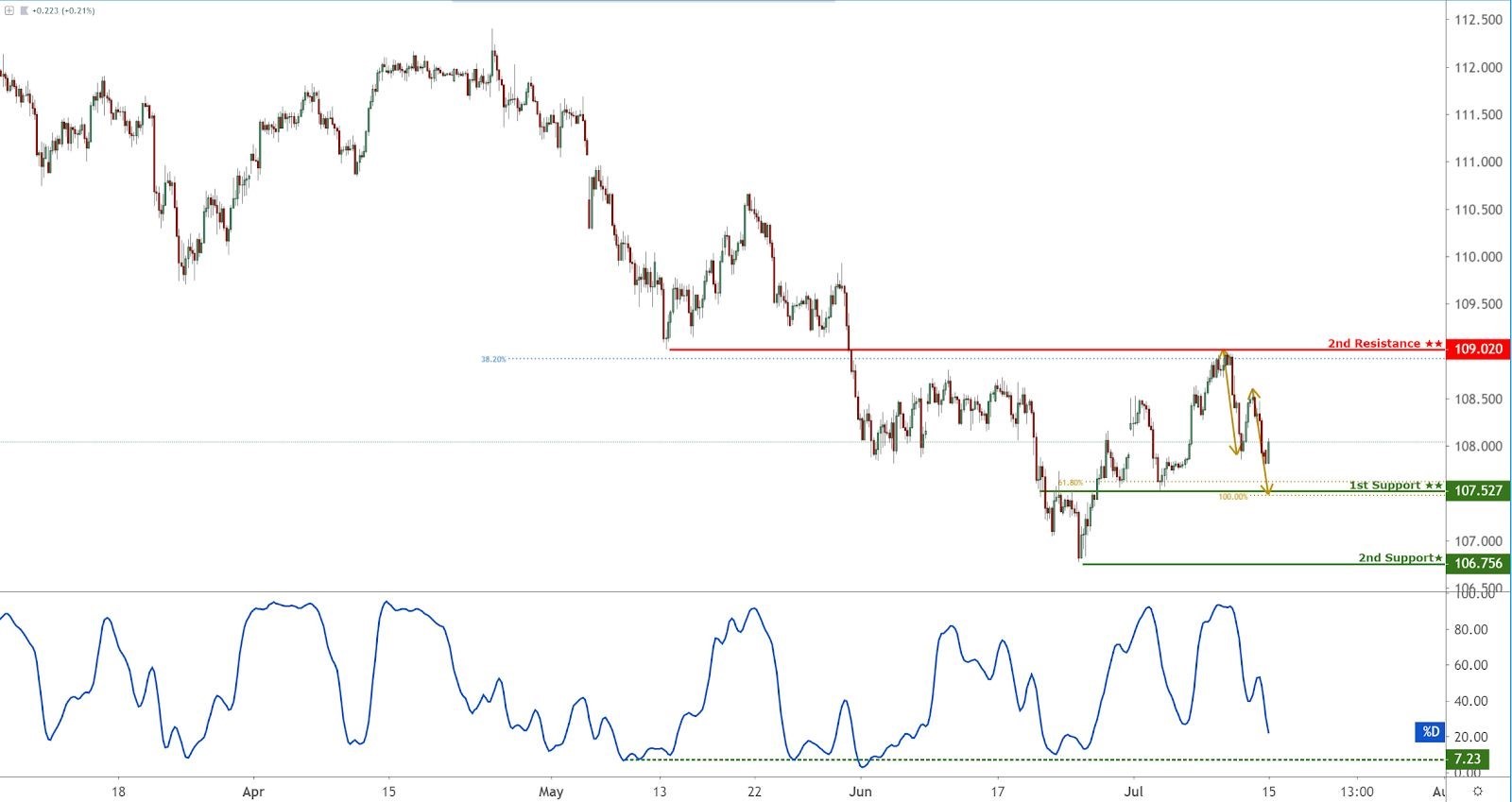 China’s June month retail sales and industrial production cleared 8.3% and 5.2% expectations for yearly figures while clocking in 9.8% and 6.3% respective growth numbers. The GDP for the second quarter of 2019 matched 6.2% forecast on a yearly basis but grew past 1.5% estimate to 1.6% on a QoQ format.
While upbeat prints of retail sales and industrial production initially please the Aussie buyers, because
China is Australia’s largest customer, a GDP figure close to the lows of Chinese government’s 6.00 to 6.5% range keep buyers in check. At the trade front, recent signs are positive to the US-China trade stalemate as the US is likely lifting its ban from selling equipment to China’s Huawei, noted by Reuters, whereas China is also considering to put its best trade negotiators on the front to break the present deadlock. This week ahead, Australia will release their unemployment numbers which is one to watch closely. The RBA has previously emphasized on its labor force as a driving factor to a better economy. It has recently slashed rates by 25bps twice to help the labor force. 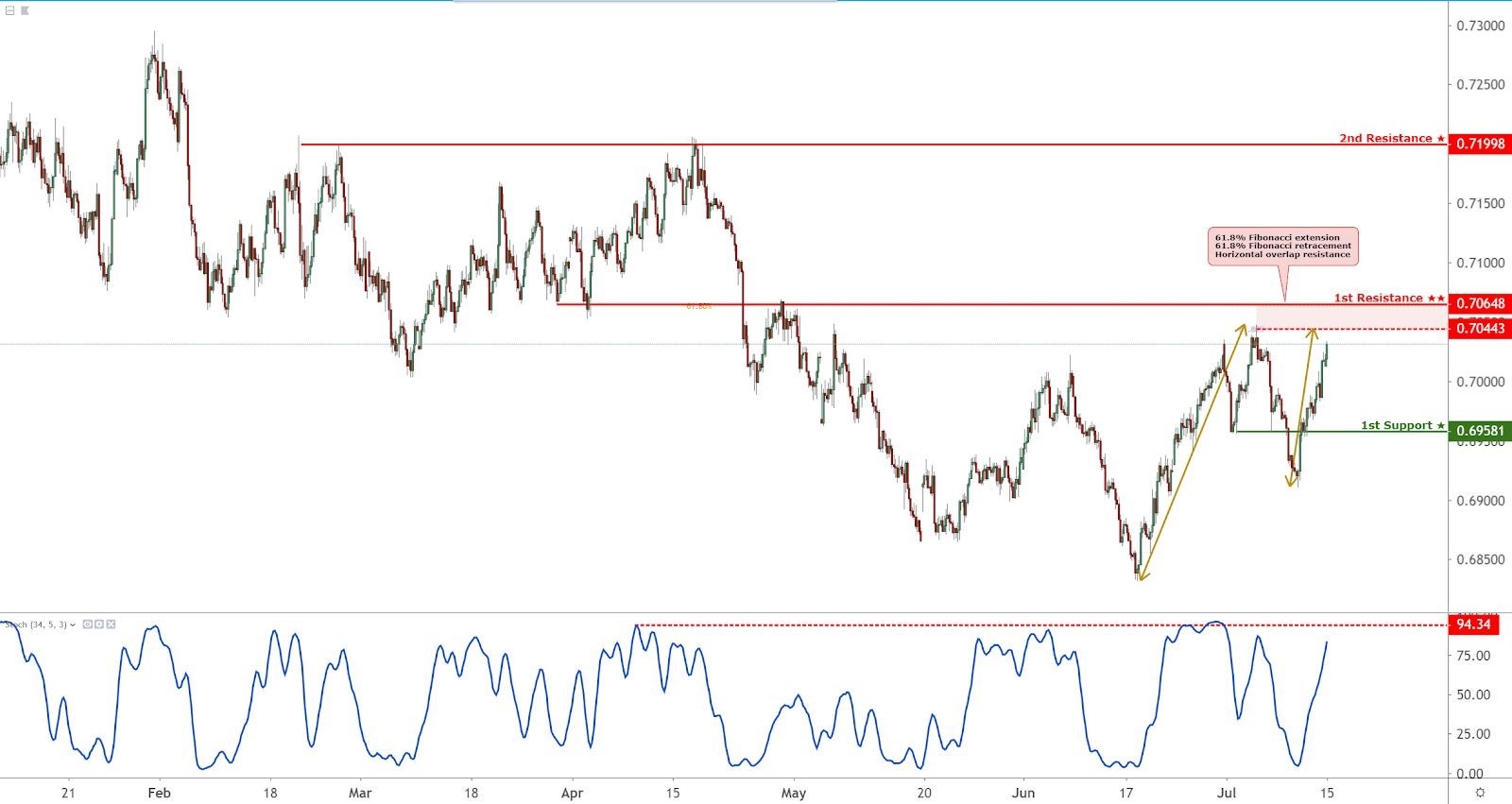 AUDUSD is approaching key resistance at 0.7044 area. This is a level where we can see a 61.8% Fibonacci retracement, extension and an overlap resistance line up. Our 1st support is down at 0.6958. It’s worth noting that Stochastic is also correspondingly approaching resistance at 94%.

AxiTrader allows you to trade the Australian Dollar against the US Dollar (AUDUSD) as a CFD.

NZD is being boosted by purchases against Aussie and better-than-expected China data. China’s June month retail sales and industrial production cleared 8.3% and 5.2% expectations for yearly figures while clocking in 9.8% and 6.3% respective growth numbers. The GDP for the second quarter of 2019 matched 6.2% forecast on a yearly basis but grew past 1.5% estimate to 1.6% on a QoQ format. Up ahead for this week would be NZ's CPI data due for release tomorrow. It is expected that its reading will improve which could help lift the NZD. 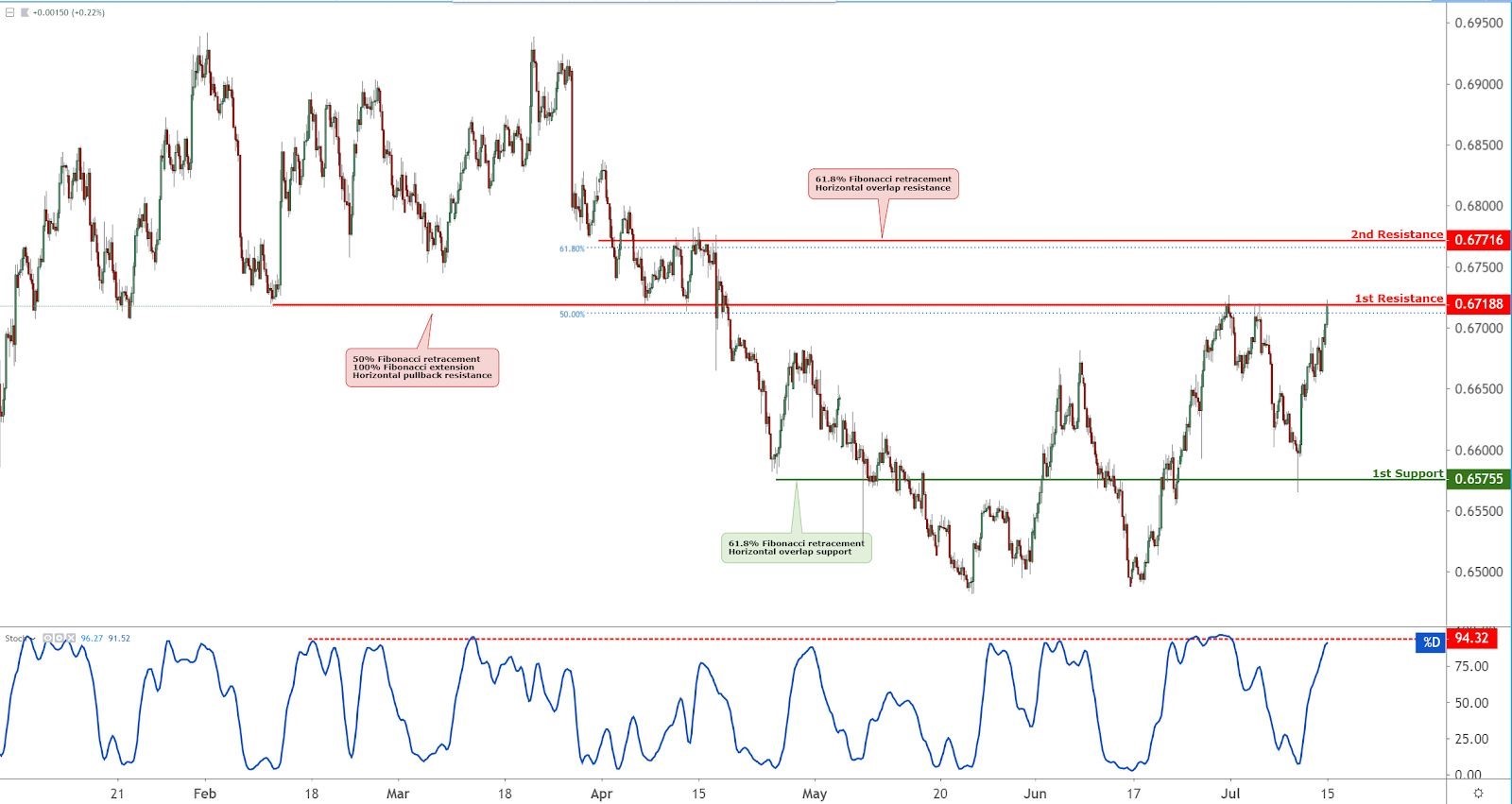 NZDUSD is seeing major resistance at 0.6718 area which is a 50% Fibonacci retracement, 61.8% Fibonacci extension and a horizontal overlap resistance level. We can correspondingly see Stochastic is also at 94% resistance.

AxiTrader allows you to trade the New Zealand Dollar against the US Dollar (NZDUSD) as a CFD.

FUNDAMENTAL ANALYSIS ON CAD
Crude oil, Canada’s largest export earner, has been on a rise off-late as not only the US-Iran geopolitical tension but the news that the British oil tanker was also stopped by the Iranian militants in the Persian Gulf also added strength into the energy benchmark. Recently, Iranian President Hassan Rouhani recently commented that Iran is ready to talk with the US on condition of removing sanctions and returning to the 2015 Nuclear Deal. Further, the US tropical season witnesses the damages done through the storm Barry which the Reuters says could go as long as 73% of the US offshore oil production. Weighing on the CAD, however are reports that the macro production efforts by OPEC are likely being compromised by the increased output of non-OPEC members weigh on the oil prices. Also capping the prices could be the trade tussle between the US and China. China's recent upbeat data could limit the CAD's downside as commodity currencies benefit the most from those data. Up ahead for the week are Canada’s CPI and Retail Sales readings.

AxiTrader allows you to trade the US Dollar against the Canadian Dollar (USDCAD) as a CFD.