OPEC, Oil Supply and the Geopolitics at Play

As the old saying goes, oil makes the world go ‘round (well, at least for now it does). But which direction will the world send oil prices? This is the pressing question facing traders in commodity markets, particularly given the historic moves seen in the oil price of late.

The commodity known as ‘Black Gold’ saw its price drop for a record 12 straight sessions in November, with both the West Texas Intermediate (WTI) and Brent contracts falling out of favour with Investors. Let’s look at some of the competing supply and demand forces currently dictating the oil price direction, as well as having a look at some important events on the horizon for this globally important commodity.

Up until the recent sell-off, the price of WTI Crude Oil had been pushing higher for much of 2018. Economic expansion in the US over the last 18 months has been a key driver of demand, while supply side disruptions from Venezuela and the anticipated effects of renewed Iran sanctions had also contributed to the upward sloping oil chart.

Market participants had worried about the possibility of an oil shortage, and this caused the major oil producers to significantly raise output to offset the anticipated effect of the Iran sanctions. But by the time the Iran sanctions came into effect in the early part of November, the market learned that eight waivers had been granted to countries which enabled them to keep importing oil from Iran.

The result of this was that the oil market was showing signs of being oversupplied, as evidenced by the unexpected build up in US Crude Oil Inventories during October and November. An example of this was on November 15th when US crude oil inventories increased by 10.3 million barrels for the week, well in excess of the 2.9 million expected. 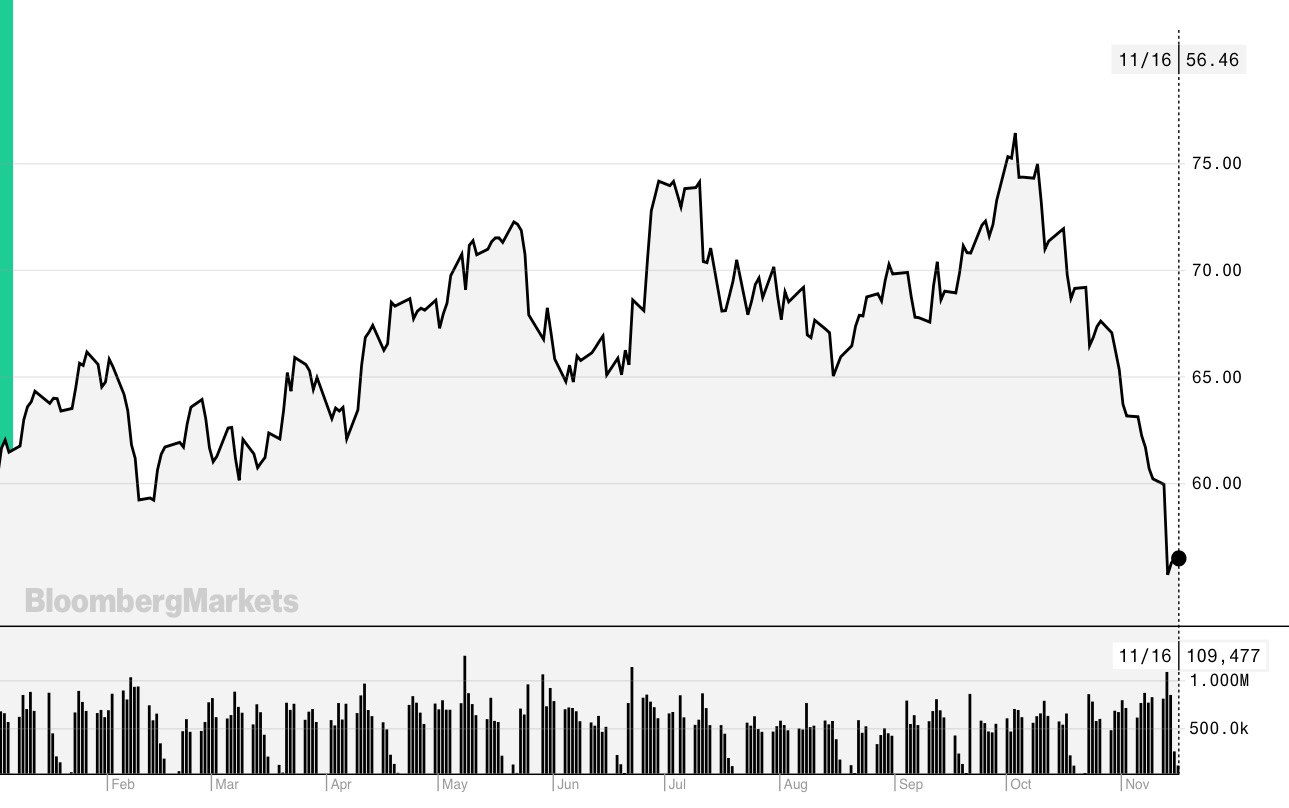 The Supply Side affect of record US oil production

Perhaps the most significant development in the oil market has been the ramping up of oil production by the US. According to the US Energy Information Administration (EIA), US crude oil production averaged 11.4 million barrels per day during October, and that for the year, the average daily production will be 10.9 million barrels per day, which represents a nearly 16% increase over the 2017 average. Furthermore, the EIA forecasts that US crude oil production will increase a further 11% in 2019. To put these figures in context, the US has for the moment at least (on a barrel per day output basis) surpassed Russia and Saudi Arabia to become the world’s largest oil producing country.

But the frailty in the oil price hasn’t only been due to supply side pressures. Against a backdrop of a correction in US equities, uncertainty over Chinese-US trade talks and the impact of higher US interest rates, talk of a slowdown in global growth has risen to the fore and caused market participants to question what impact this will have on oil demand in the coming 12 months.

Just recently the International Energy Agency (IEA) cut its demand forecast for OPEC (Organisation of Petroleum Exporting Countries) crude oil next year by 300,000 barrels per day. However, the IEA did leave its overall growth forecasts for 2019 mostly unchanged, estimating an increase of production of 1.4 million barrels per day next year, reasoning that weaker economic activity will be offset by lower oil prices.

Whilst the contrasting supply and demand forces provide plenty of food for thought, there is another factor at play, namely geopolitics.  On November 13th, President Trump tweeted that “Hopefully Saudi Arabia and OPEC will not be cutting oil production. Oil prices should be much lower based on supply!”. This tweet was in response to speculation that OPEC was considering production cuts. Clearly President Trump see’s the economic benefit of lower oil prices and is all too aware of the constraining effects that high oil prices can have on growth.

Oil hit 4-year price highs as recently as October this year, at which point there was chatter in the commodities market about whether a return to US$100 per barrel was on the radar. Given that the price of oil has slumped around 20% since its yearly highs in October, most price forecasts are in the process of being reassessed considering the volatility. The EIA has stated that it expects WTI Crude to be averaging approximately US$65 per barrel in 2019, though it should be noted that forecasts are always subject to change.

So here is the dilemma facing oil traders – on the one hand, we have OPEC considering production cuts while on the other, we have US President in a not so subtle way advising them to keep production levels exactly where they are. How much political pressure if any will be exerted on Saudi Arabia and OPEC to maintain current output levels? This remains to be seen, and for the moment it’s a key piece of the puzzle in the lead up to the OPEC meeting on December 6th and 7th in Vienna. The situation is further clouded by reports from Reuters that Russia may not be so keen on supporting any OPEC production cuts.

What to expect between now and when OPEC meets?

With so many competing forces at play and parties with vested and conflicting interest, the global oil market can be viewed as one giant balancing act. And with the world’s three major oil producers (Russia, US and OPEC) having different perspectives on whether supply should be increased or decreased, this can only create more whirlwinds for the commodities market.

If OPEC does decide to cut production by between 1 million to 1.5m barrels per day, will the US respond by ramping up production? Looking further ahead, what will happen when the Iran export waivers expire? There are a number of scenarios that could play out on the oil market over coming months.

If traders get the sense that any OPEC production rollbacks will have limited supply impact, while at the same time slowing global growth fears create demand-side headwinds, then oil could be in for more whipsaw price action but with a downside bias in the near term.

But on the flip-side, if OPEC adopts a more hardline approach on limiting output, this may see the oil price stage a bounce-back, with bargain hunters being attracted by the current levels which are significantly discounted compared to where the price was only last month.

So, while volatility is likely to continue in the lead-up to the December OPEC meeting, with the market reacting to any tweets, or ratcheted-up rhetoric in the interim, traders will be looking for signs of any shifts in momentum of the oil price. Whether that momentum results in a corrective move higher, or a continuation of the downward slide will depend upon to what degree OPEC decide to switch off the taps (so to speak) come December.

For more information on how to trade oil, or to open a Demo account, visit Axitrader here.