No end to Brexit uncertainty. Pound to plunge further?

Prime Minister Theresa May suffered an embarrassing defeat on her Brexit strategy last week after supporters in her Conservative party refrained from voting with the PM, as they feared it will lead to a No Deal option being taken off the negotiating table.

This defeat may have pushed Britain closer to a no-deal exit from Europe, putting PM May’s strategy in even greater jeopardy.

The Prime Minister will continue talks with EU leaders this week. However, it is unlikely Brussels would back a revamped Brexit deal, considering her failure to even get the UK Parliament to endorse her plans.

Last week, Mark Rutte, the Dutch prime minister, expressed great concern after the vote for Brexit and warned that a no-deal exit from the bloc risked severe consequences for the UK economy. He is also deeply troubled that Britain does not seem to be doing much to avoid the risk of crashing out of the EU by March 29. 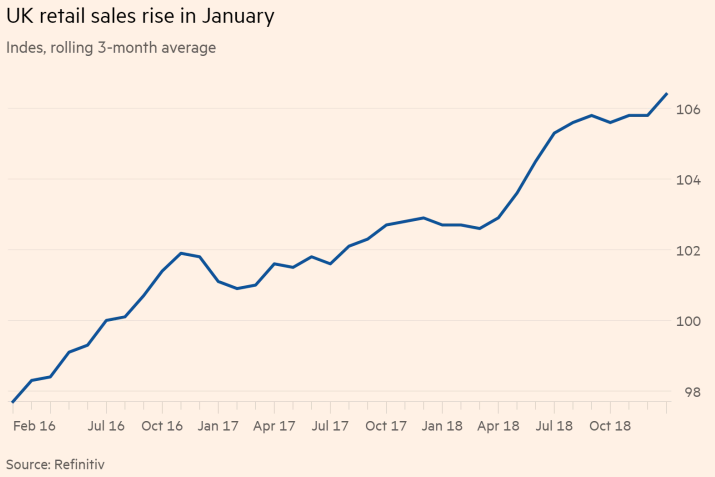 UK retail sales grew at a faster rate than expected in January, providing some relief amidst all the negative Brexit news. Retails sales increased by 1 per cent over the previous month, up from a revised 0.7 percent contraction in December.

The Bank of England sharply downgraded its 2019 economic outlook to 1.2 percent last week. This is a significant decline from the Bank’s November 2018 forecast of 1.7 percent.

However, many economists believe growth may be even lower than the forecasted 1.2 percent, as other economic data such as business investment, housing market and consumer confidence are not looking positive as well.

If Brexit talks continue to be troubled, it will further drag the economy down and will likely  lead to interest rate cuts and a weaker pound.

On the housing front, British property surveyors are the most downbeat about the short-term outlook for house prices in nearly eight years.

The Royal Institution for Chartered Surveyors (RICS) said its monthly house price balance sank to -22 last month from December’s reading of -19, the lowest since July 2012.

As Brexit nears, sellers are also slow in putting homes on the market for sale.

Consumer confidence remains at the lowest level since 2013. As the Brexit deadline nears, consumers are expected to be even more cautious with their spending. They may delay purchase of bigger items and instead save up for the uncertain post Brexit.

The Brexit uncertainty will continue to create volatility for the pound. The slow Brexit negotiation progress looks certain to weaken the pound further. However, traders are advised to be cautious, as surprises can come at unexpected times. Data from the US and China will also be important factors that can move the pound.

With continued Brexit uncertainty and bad economic data, GBP/USD has been falling for 3 straight weeks. Last week, price fell below an important level of 1.2830 but on Friday, it made quite a significant rebound driving prices up to and closing at 1.2884. Although, it closed as a bearish weekly candle, Friday’s bull strength shows there are strong buying interest for the pound.

Much is also dependent on the strength or weakness of the US Dollar. The US economy is showing signs of slowing and rate hikes are now uncertain. These could lead to the dollar weakening and provide some relief to GBP/USD’s bearishness.

From a technical perspective, there is room for GBP/USD to move lower. If it breaks below 1.2800 level again, it could bring GBP/USD down further to test 1.2710 level. However, if GBP/USD can break up above 1.2970, the short term trend may change to the upside and retest of 1.315 is possible.

As usual, watch closely for upcoming UK data releases and Brexit news as they are likely to impact on the direction of GBP/USD.