Market Wrap: Aussie Dollar Remains Out Of Favour After GDP-miss

A day of mourning for George H.W. Bush in the US allowed the market to catch its breath after the carnage on Wall Street the day prior. With US stocks and bonds closed, the FX market was left to its own devices and the trading session was mainly about light position-adjustments ahead of some big events still due in the remainder of the week with Non-Farm Payrolls looming large.

With traders still extremely wary over the yield curve inversion as well as heightened anxiety over the fate of future US-China trade talks, the US Dollar was on the rise as investors sought the safe-haven appeal of the greenback amid the market tumult.

The USD made gains against the CAD, Yen, Kiwi and particularly against the Aussie Dollar which is still feeling the ill effects of the poor GDP print. With economic growth coming in just half of what was expected for the quarter, the AUD quickly fell out of favour with investors losing 1% of value against the USD. In a short space of time, the AUDUSD rate went from challenging resistance at 0.74 to now sitting below 0.73 and facing further pressure if the upcoming Retail Sales numbers are similarly sluggish.

Pivot Point analysis on the chart below illustrates how the AUDUSD has broken below 2 support levels as a result of the weak GDP number. The third line of support at 0.7247 could give way on further fundamental weakness, so the Retail Sales numbers today will be one to watch as a miss on the data could see the AUDUSD fall further adrift of the tough resistance just shy of the 0.74 level. 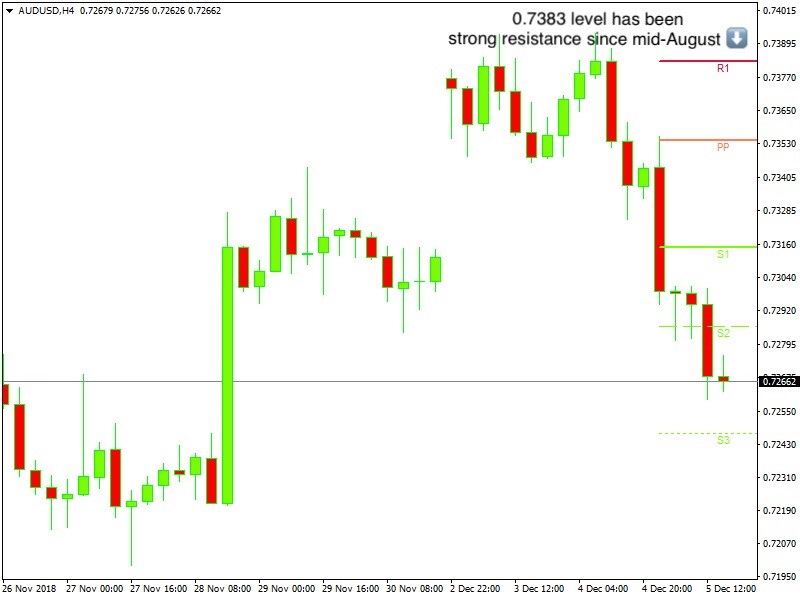 The Aussie Dollar also had a tough time against the Kiwi, with the AUDNZD rate slipping 0.4% to 1.0541. While the Kiwi did fall against the Dollar by half a percent, it wasn’t weighed down by the same domestic-data that hit the AUD over the last 24 hours.

The EURUSD rate currently sits little changed at 1.1340 and is lacking any clear direction at this point with the pair trading operating in a broad range between support at 1.1315 and resistance at 1.1430.

The British Pound performed better than most against the USD with a minor 0.13% rise as the recovery effort from its fresh yearly lows reached yesterday continues. The Cable rate attempted a move towards resistance at 1.28 before falling short and retreating to 1.2730. With volatility around this pair remaining high ahead of the Brexit vote in the UK Parliament on December 11, a further test of the support at 1.2660 remains on the radar if momentum indicators take a bearish turn over the coming sessions.

Elsewhere, US WTI crude oil settled 36c lower at US$52.89 per barrel as investors await the OPEC summit in Vienna. While consensus is that the oil market is clearly oversupplied at this point, the big question remains whether Saudi Arabia and its OPEC allies will cut production to balance the market, or whether they will yield to political pressure from the US and maintain output at or near current levels. One suspects that anything less than a cut of at least 1.3 million barrels per day will be seen as a disappointment and could leave WTI oil vulnerable to trading at sub US$50 per barrel in the near term.