Market Overview: Sterling On The Rise While Broader Sentiment Improves

For the second US trading session in a row there were positive signs regarding US and China on trade, and this reduced the safe-haven appeal of the USD. The greenback was also hampered by a report which showed that headline CPI was unchanged month on month, which was in line with expectations.

But the Core CPI number showed a 0.2% rise, and this is the one that more credence should be given to as it excludes the volatile food and energy prices, particularly as the oil price fell sharply last month. So while most of the attention was focused on the flat headline CPI number, there are signs core inflation is still present and this is one to watch heading into 2019 given the uncertainty over how many FOMC rate hikes we are likely to see next year.

With the US Dollar weaker, the Euro advanced around 0.4% higher against its US counterpart, while some positive developments surrounding the contentious Italian budget also helped the single currency overnight. The EURUSD is still trading in between support at 1.1290 and resistance at 1.1460, with attention likely to centre on the ECB interest rate decision and press conference on Thursday. Investors will be wanting to hear what tone ECB President Mario Draghi takes regarding the health of the Eurozone economy with a view to further winding down its QE program next year. But until such time as the above-mentioned support and conviction levels are broken with any conviction, the EURUSD looks set to continue its rangebound trading pattern.

We don’t get to say this very often lately, but Sterling was the best performer among the majors with news that Theresa May looks likely to survive a leadership challenge boosting Sterling back towards former support-now-turned-resistance at 1.2660-1.2670. Heading into the last hour of the New York session, the Cable rate was up 1.3% on the day with traders figuring that if Theresa May stays as PM this at least provides some level of stability even though the Brexit issue as a whole remains far from resolved. If the GBPUSD rate does manage to clear resistance at 1.2660/70 then we could see further short-covering send the pair through 1.27, but absent a breakthrough on the Brexit negotiations the upside looks limited for now.

Turning to the Australian Dollar, the currency managed to eek out a daily gain against the greenback and has moved to 0.7220. The 4-hour chart below shows that the Aussie Dollar has been in consolidation mode much of the week having fallen from the highs seen earlier in the month. For the time being, support at 0.7189 has held and looking further ahead, a clearance of the third Pivot Point resistance at 0.7270 is required if the AUD is to have ambitions of another run at the 0.74 level anytime soon. Given all the volatility in US equities and the broader market over the past week, the Australian currency looks to be weathering the storm reasonably well and if support just below 0.72 holds then the currency could be poised to advance if we see a more sustained turnaround in risk-sentiment. 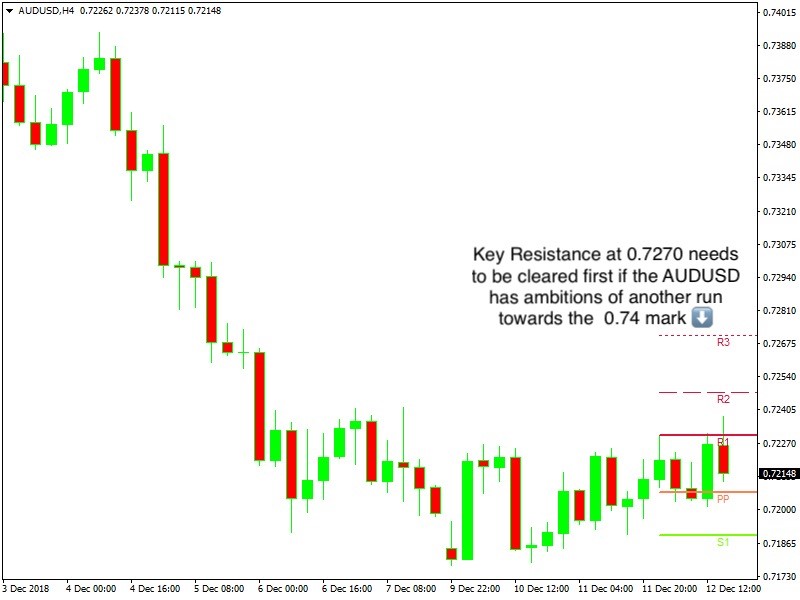