Home / Blog / Market Analysis / Market Overview: Positioning Ahead Of The Fed Is The Name Of The Game

Market Overview: Positioning Ahead Of The Fed Is The Name Of The Game

Positioning ahead of The Fed was the name of the game on markets, with much of the price activity being of a cautious rather than decisive nature.

An early tech-rebound on Wall Street led initially sent the US bourses higher, though with the broader market still lacking confidence over interest rate and growth worries there was little follow-through buying on risk assets ahead of the FOMC event.

In the commodities market, the spot gold price consolidated above the US$1250 per ounce mark on US dollar weakness and on expectations that we may see some dovish signals from the US central bank. US bond prices also found support ahead of the Fed outcome for the same reason.

But with the market already in a highly-strung state of mind, a worried-sounding Fed is surely not going to help investor confidence. For this reason, Jerome Powell likely won’t be on a mission to accentuate the negatives at his press conference and therefore a more neutral outlook could be expected from the Fed Chairman.

Crude oil had a dreadful session, with technical selling sending the price sharply lower after closing below US$50 the previous session. As the chart below shows, the close below this key level has exacerbated the selling today. 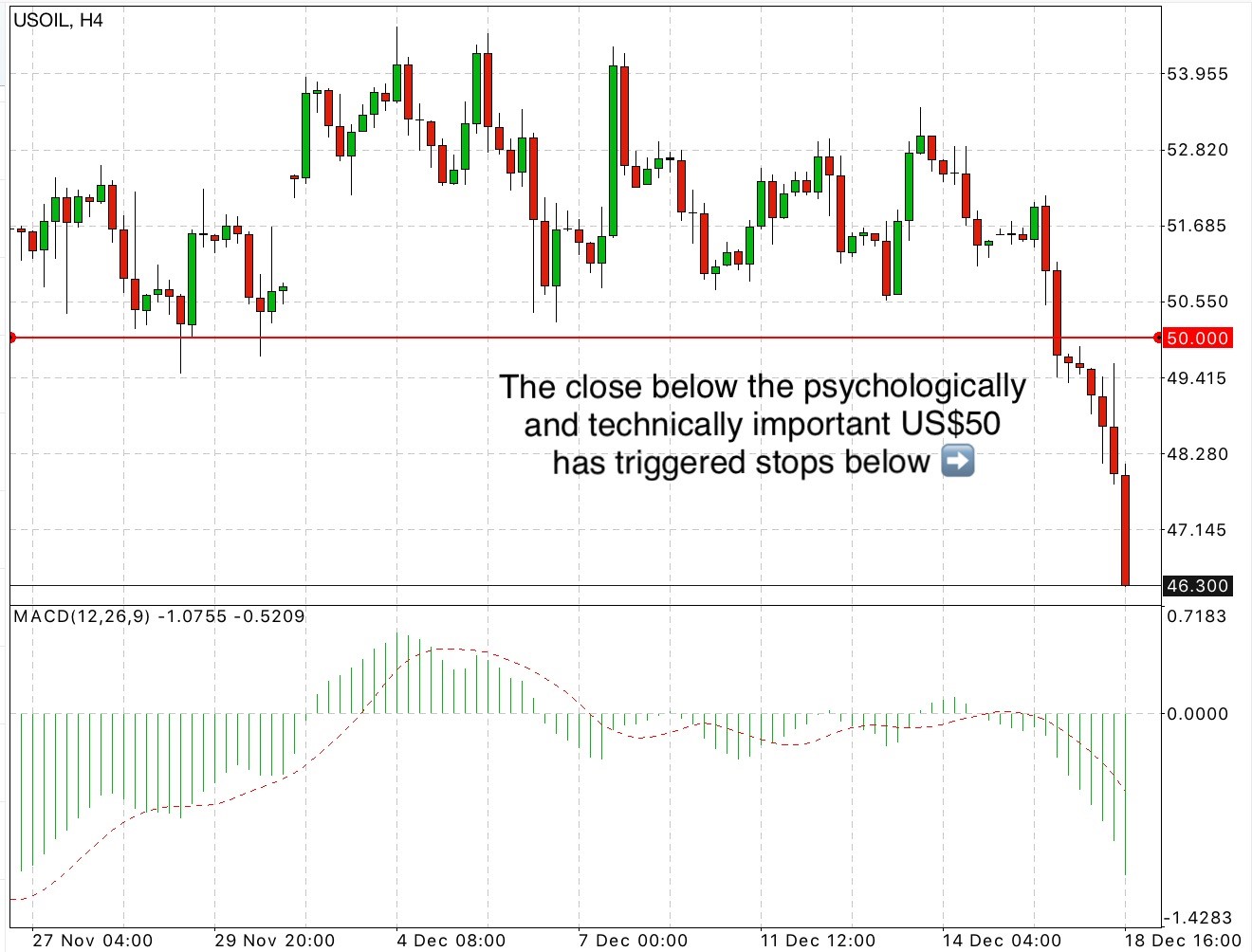 The US WTI contract slumped 7.3% to settle at US$46.24. With the OPEC and Russian production cuts not due to kick in until next year, the short-term price pressures for oil remain skewed to the downside.

The US Dollar was again facing selling pressure ahead of the Fed meeting, with the currency losing ground to most of its counterparts. The EURUSD had modest gains but remains contained within the broader range after earlier intraday attempt at surpassing the 1.14 level. The chart below demonstrates the range-bound trading pattern of the EURUSD rate this month so far, with 1.1290 support containing lower breaks while 1.1430 has remained steadfast on the high side ahead of more significant resistance at 1.1460. 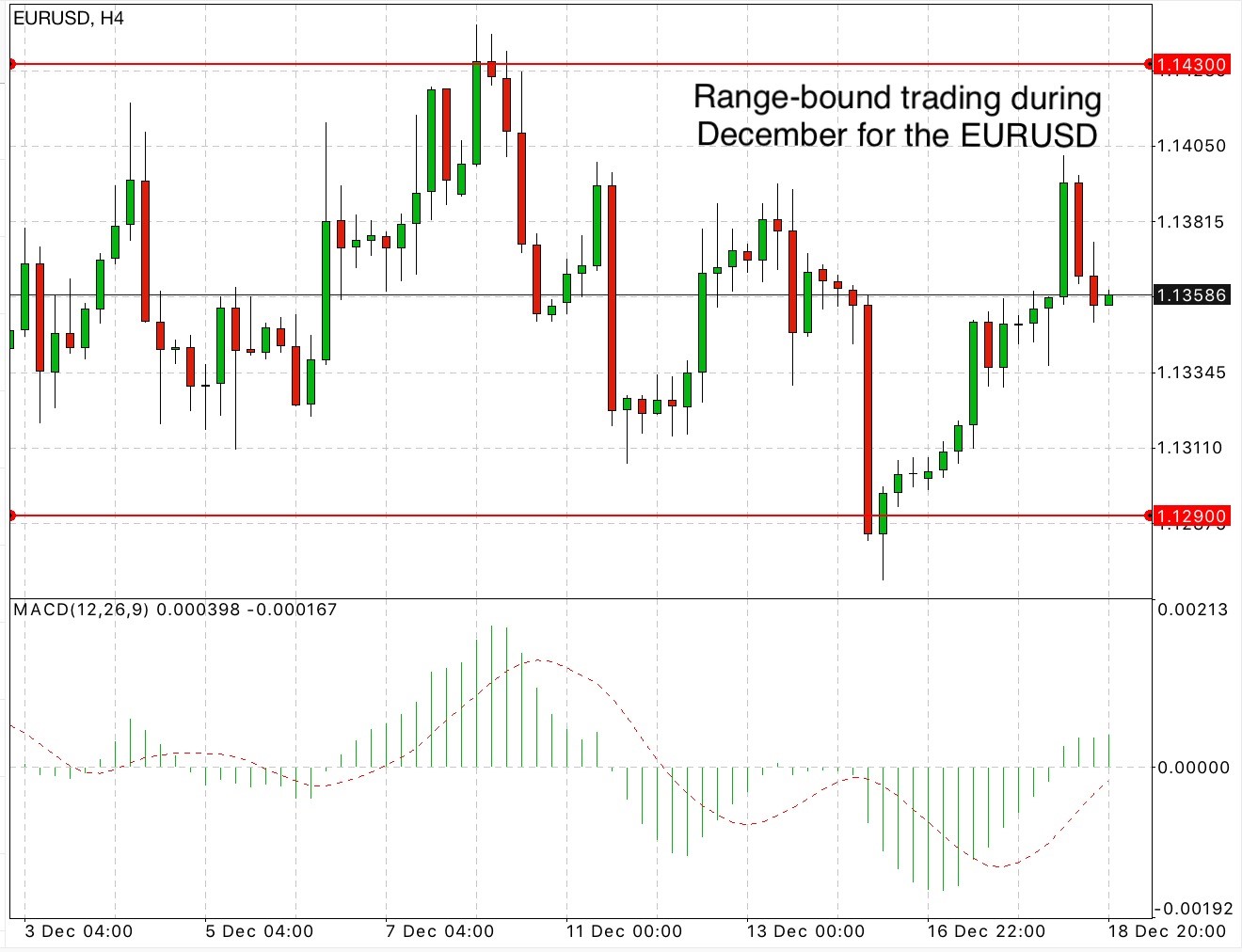 Despite the failed intraday attempt at 1.14, momentum indicators for the EURUSD rate remain positive albeit moderate, with the pair awaiting the FOMC outcome for a potential catalyst to break out of this month’s well-trodden trading range.

Meanwhile, Sterling remains trading below former support-turned-resistance at 1.2660, but much like the Euro, a potential break above resistance levels may hinge on the FOMC and specifically how dovish or otherwise a tone is struck by Chairman Powell at his press conference. Heading into the final hour of trade the cable rate was at 1.2640, with low-side support levels lying at 1.2590 ahead of 1.2500.

The Australian Dollar was flat, trading around the 0.7170 level with the currency unable to pick up any momentum despite the generally weaker tone of the US Dollar. Ahead of an event-risk such as the FOMC meeting, it seems that traders are leaving the AUD on the sidelines until such time as we gain further clarity from the US central bank concerning the economic outlook.

Heading into the FOMC event, we are likely to see ranges tighten further with a potential slight repositioning towards defensive assets while we await the next move on US interest rates.