The US trading session could best be described as mixed, with no clear trend emerging in the currency market while US stocks again traded in a very large daily range. There were reasons for positive sentiment, such as a Bloomberg report that China was considering cutting tariffs on US-made cars to 15%, but this was largely offset by worries over US government gridlock as well as continued uncertainty over the fate of Brexit. On the data front, US PPI came in slightly above expectations ahead of the CPI reading due on Wednesday.

With US equities in positive territory, the Australian Dollar made slow but steady progress as the currency climbed back above US$0.72 level, but gains were limited due to the greenback garnering some support on the back of the PPI number.

Sterling was again on the slide with the currency setting a fresh low for the year just below the 1.25 level on speculation that PM Theresa May could face a No-Confidence vote. Earlier in the session, the GBPUSD rate made a push higher, however the former support level of 1.2660 has now turned into a level of decent resistance, and this cut short the recovery attempt of the Cable rate. With the Brexit story looking far from resolved, Sterling remains at risk of further downside moves and while support at 1.2490 held today, a test of second-level support at 1.2465 remains a distinct possibility in the absence of any positive political developments.

The climate of political uncertainty both in the UK and on the continent appears to be taking its toll on the Euro. The single currency drifted lower against the greenback with traders struggling for good reasons to buy the Euro given the Brexit situation, Italian budget problems and recent uprisings in France. As the 4-hour chart below shows, the EURUSD rate has fallen further below its 50, 100 and 200-day SMA’s with momentum on the wane. The pair has spent much of the past 3 weeks operating in the 1.13-1.14 range, which is why the Pivot Point support at 1.1290 will be one to watch. A break here would open the door to 1.1250 and possibly lower. Conversely, if the level holds then significant resistance awaits on the high side at 1.1460. But in the meantime, we could be in for more rangebound trading on the EURUSD rate while the key 1.1290 and 1.1460 levels hold on either side. 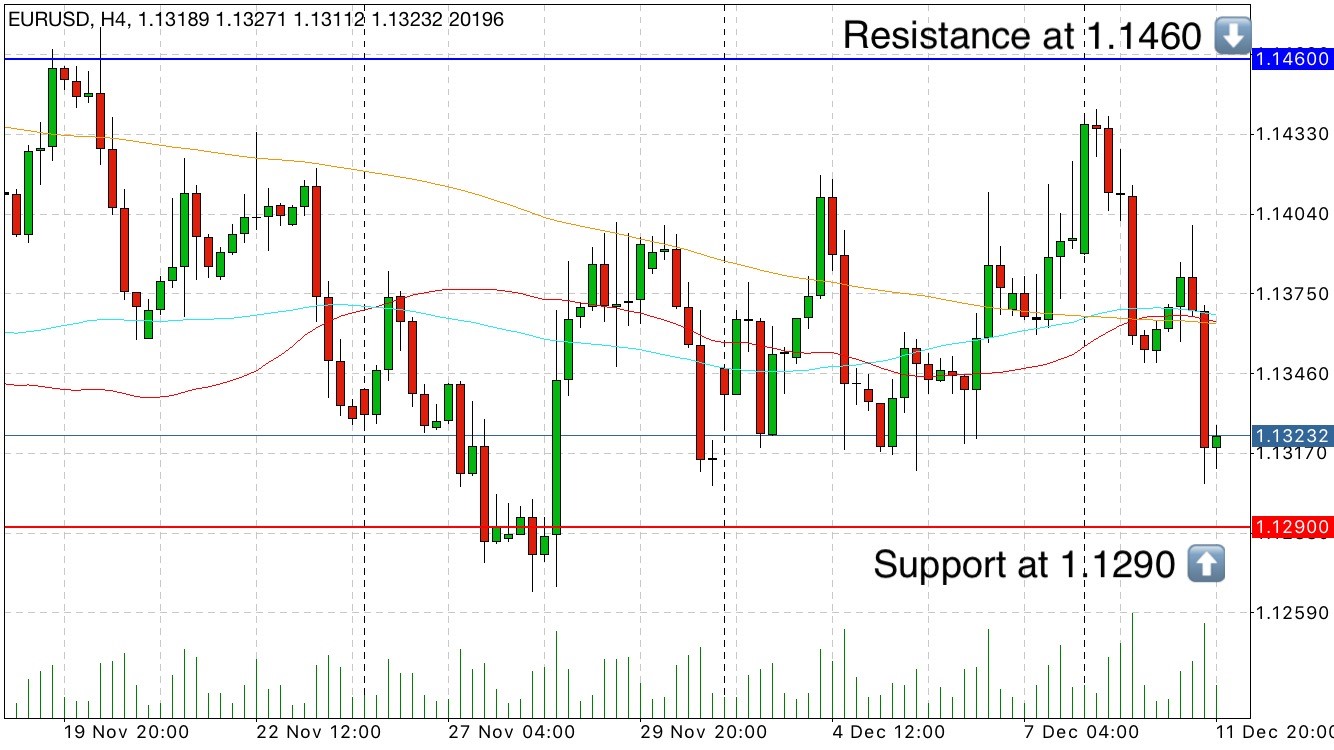 Overall in FX, the USD made gains against the Euro, GBP, CAD and Yen, but fell against the AUD and Kiwi. Traders will be awaiting not only CPI in the US but also Retail Sales numbers later in the week which may provide more direction for the greenback.

Elsewhere, the spot gold price continues to hover at its range-highs just below the US$1250 level, while US Crude oil gained 1.3% to settle at US$51.65 per barrel on news of a Libyan supply shutdown. For the remainder of the week, the broader financial market will continue to monitor developments on the US-China trade front as well as those surrounding Brexit. These issues, along with the FOMC rate outlook are what will shape market sentiment and therefore direction between now and year-end.