Hot Topic: Trading the US Government Shut Down

The ongoing stand-off in Washington between Democrats and Republicans over a refusal to fund Donald Trump’s marquee project of a wall along the US/Mexico border has seen many parts of the US government shut down for more than three weeks. That’s the longest run of financial catharsis that has ever been recorded in Washington and with an estimated 800,000 government employees not receiving pay checks, the risk is that this will start to have a meaningful impact on the economy.

President Trump’s primary focus appears to be on simply securing the funds to build the wall. There may be legislative process that he can use to break the deadlock – declaring a state of emergency has been mooted repeatedly – but the impasse can’t last indefinitely. The absence of funding is already generating widespread problems, ranging from reports that refuse isn’t being collected in national parks, through to unpaid security screeners at airports calling in sick. On top of this, not paying staff and contractors starts to have a meaningful impact – reports suggest the situation is now costing the economy $1.2 billion a week.

Can I trade this?

It's not the first time such a shut down has taken place, although most frequently they are resolved in a couple of days. However, looking at the longer government closures recorded – Bill Clinton’s 21 day event in 1995/96 and Barack Obama’s 16 day stand off in 2013 – there’s some interesting price action to be seen for the US dollar.

As we have noted, the current situation is said to be squeezing almost $200 million a day from the economy. Past history has shown that the accompanying toll on GDP can however be recovered by the economy in subsequent quarters, but the shut down is likely to be dragging on the US Dollar. Clearly there are other factors in play right now, such as the string of dovish messages we’ve seen emerging from the Federal Reserve, but with tensions building in the Middle East as US troops prepare to leave Syria, plus no end of bad news emerging in terms of global trade, the US Dollar ought to be receiving some safe haven support.

The following chart shows the performance of the DXY dollar index in the 21 trading sessions before and after the 1995/96 and 2013 shutdowns were resolved. It also highlights the DXY’s performance in the 21 sessions concluding Friday 11th January. 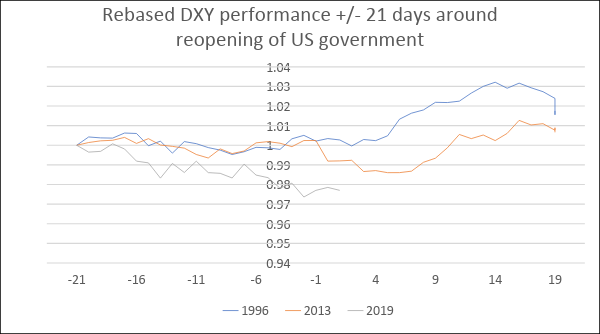 The past two incidences of lengthy government shut downs have been characterised by dollar losses, transpiring into meaningful gains once the matter is resolved. Again, this reinforces the idea that the economy will suffer in the short term, but history illustrates that GDP will bounce back as spending resumes. Clearly there’s a hidden human cost here with government workers going unpaid yet still having to meet obligations such as mortgage payments, but historical evidence states that juggling credit card debts and drawing on savings has been sufficient to avoid any broader economic impact here.

Which instrument should I use?

If you are looking to trade the resolution of the government shut down, a dollar cross makes for an obvious choice. However care must be taken to ensure that the opposite side of the trade doesn’t experience any adverse price movement. To this extent, it may be better to pick safe haven pairs – USD/CHF or USD/JPY. Commodity currencies such as CAD could see abject price swings given volatility in the dollar, cable risks being directed by Brexit and the Aussie Dollar will likely react to further news of any improvements in the trans-Pacific trade spat.

In addition there’s justification to look for a degree of diversification here, potentially by simultaneously taking long USD/CHF and USD/JPY positions when the government shut down concludes.

There’s no guarantee that history will repeat itself. Also, as we saw especially with the 2013 shut down, the dollar continued to weaken for a short while after resolution. There’s no reason to believe that the greenback will spike as soon as the deadlock is resolved, so ensure that any stops are set in such a position that gives any price action sufficient time to be incorporated and hat sufficient margin is available on your account.