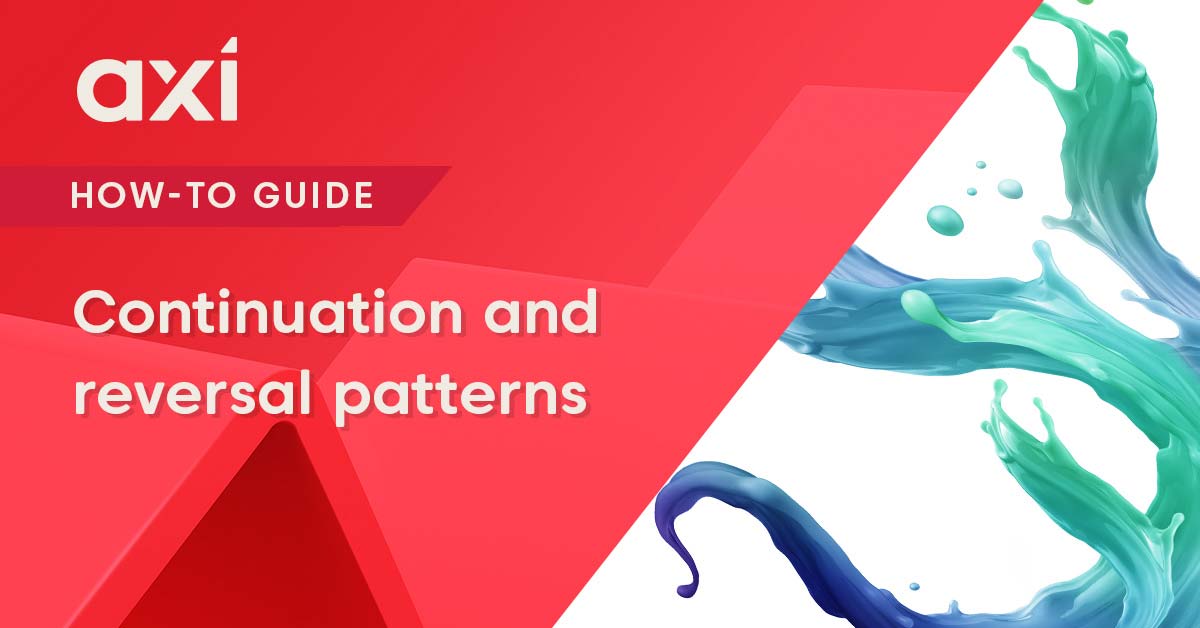 Price patterns are popular amongst traders who use technical analysis in their trading. They can be divided into two general categories: continuation patterns and reversal patterns.

These pattern types are more easily spotted in hindsight, traders sometimes struggle to decide whether the signal they’re seeing is valid or not. Therefore, it can be beneficial to use additional tools to filter them.

But before you dive into the world of continuation and reversal patterns, it's important to be well acquainted with some important trading terminology, such as common types of charts in forex trading (line, bar & candlestick charts) and the difference between bullish and bearish markets.

So, what is a price pattern?

A chart pattern – or price pattern – is an identifiable movement in the price on a chart that uses a series of curves or trendlines. These patterns may repeat and occur naturally due to price action, and when they can be identified by market analysts and traders, they can provide an edge to a trading strategy and help to beat the market.

Like the majority of price patterns, there are four key elements that are needed to form the pattern:

Chart and price patterns are an important part of technical analysis that every avid trader should understand so as to improve how they view and operate in the market.

Let’s learn about the most frequent patterns you will discover on the charts, split into reversal patterns and continuation patterns.

What are continuation patterns?

Continuation patterns are price patterns that show a temporary interruption of an existing trend. For example, the price of an asset might consolidate after a strong rally, as some bulls decide to take profits and others want to see if their buying interest will prevail.

Most traders will wait for a breakout above/below the line of resistance/support as a confirmation that the trend is resuming, and enter a position in the same direction.

When setting stop loss and take profit orders, many traders place the stop slightly above or below the chart formation, while the take profit order depends on the pip range within that pattern (for example, if the pip value of the consolidation within the rectangle is 30 pips, a trader who wants to keep a risk-reward ratio of at least 1:1 might target 30 pips as a take profit target).

The most common continuation patterns are:

Rectangle patterns are formed when the price is hitting horizontal support and resistance levels, several times. The price is therefore constricted, bouncing between the horizontal levels and creating the shape of a rectangle. The price will eventually breakout and the trend will follow that direction, either an upside or downside movement.

The triangle begins forming with its widest point, and as the market keeps moving sideways the range of trading narrows, completing the full formation of the triangle at its apex. This chart pattern is often described as a horizontal trading pattern and is similar to wedges and pennants, where bullish or bearish movement can signal a continuation or reversal of the previous trend direction. 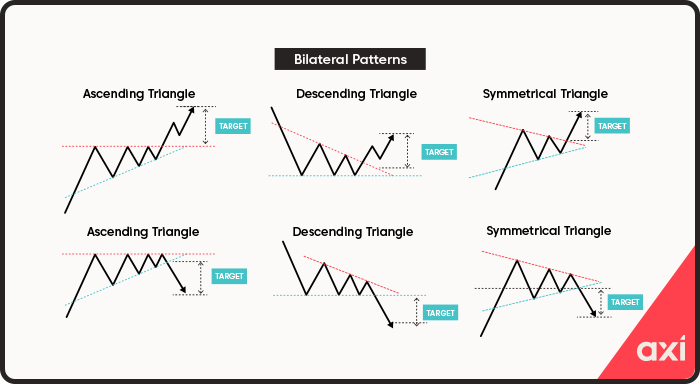 Penants patterns form the shape of a flag or triangle on the chart, and occur when price movements are becoming tighter and tighter between the support and resistance levels as time moves on. This pattern is generally considered a penant when there are at least five touches of support and resistance. Similar to rectangle patterns, the penant continuation pattern can be formed from bullish or bearish price movements.

A wedge price pattern is shown on a chart by converging trend lines, where the two lines are marked to connect the respective highs and lows of a price series. The wedge is a signal that the current trend is going to pause. A rising wedge is found in a downward trend and is a bearish pattern with lines sloping up. A falling wedge is found in an upward trend and is a bullish chart pattern with lines sloping down.

The cup and handle pattern can be formed in small time frame charts or large time frames, such as daily to monthly. The cup and handle is a bullish continuation pattern and gets its name from the shape it forms on the chart. This can occur where an upward trend has paused and become stable, followed by an upswing of a similar size to the prior decline.

The cup portion of the pattern is shaped like the letter "U" with both sides of the cup having equal sides. The handle portion is then formed on the right side of the cup with the chart moving sideways or drifting downwards and may lead to a breakout of the instrument to a high larger than the beginning of the cup.

What are reversal patterns?

Reversal patterns might signal that either the bulls or bears have lost control and that there might be a change of trend imminent. The current trend will see a pause and then the price will move in a new direction from the other side (bull or bear).

The most common reversal patterns are:

Tip: Wedge chart patterns can be both continuation and reversal patterns, depending on whether there is a bullish or bearish trend.

Head and Shoulders consist of three parts: a peak to the left (shoulder), a higher peak (the head) and another peak to the right (shoulder). The "neckline" is drawn by connecting the two bottoms - the one prior to and the one after the head formation. This line is important, as a break below triggers the signal. The bullish reversal pattern and bearish reversal pattern can be seen in the image below.

The pattern contains three successive lows with the middle low (the head) being deeper than the two outside lows (the shoulders), which are shallower. When this pattern is complete it is usually a signal for a bullish trend reversal.

Double tops and double bottoms represent two failed attempts by the price to break beyond either a key resistance level or below a key support level. This may be an indicator that momentum has been lost in this trend, increasing selling pressure after an uptrend moving into overbought territory or increased buying pressure after dipping too deeply during downtrends.

There is a similar reversal pattern known as triple tops and triple bottoms. This movement is even more powerful since the price did not break out three times instead of just two, signifying a stronger support or resistance level.

A triple top consists of three peaks that nearly hit the same price level and signals the asset may no longer be trending upwards, with lower prices expected to be on the way. The triple top can occur on all time frames but it must follow an uptrend for the pattern to be considered. This chart reversal pattern looks like the letter 'M' on a candlestick chart.

The triple bottom is the opposite to the triple top, where the chart pattern looks like the letter 'W' and will occur after a downtrend, with the three bottoms hitting around the same price level before it breaks through resistance levels.

The sushi roll reversal pattern was conceived by Mark Fisher over lunch with other traders where the topic of conversation was trade set-ups, with Fisher thinking of the possibility of combining narrow and wide price ranges.

Fisher first started with an 'inside pattern' which included 10 consecutive prices that were within a narrow and tight price range. The second series followed which was labelled the 'outside pattern', and included five price bars that engulfed the first series of price bars.

The pattern can help traders detect potential market reversals using a combination of inside and outside trading, and is applicable to any time frame. One of the benefits of using this pattern is that it signals a potential price reversal much sooner than a chart pattern e.g. double bottom or head & shoulders.

While this chart reversal pattern does provide some great insight into the potential top and bottom for the asset you are monitoring, it is best to use it in conjunction with other technical indicators and candlestick patterns.

The quasimodo pattern – sometimes referred to as the 'over and under pattern' – is quite new to the trend reversal patterns group of technical analysis.

The Quasimodo Pattern can seem quite complex but it is actually rather easy to spot. And once you see it, this trading pattern will usually provide a trader with confluent information about the market and increase confidence in trades when they occur near either support or resistance levels on charts. This means that if you are waiting for divergence set-ups before exiting your trade but notice a quasimodo pattern at the same time, it might be worth taking advantage of both opportunities by increasing your position size and adjusting stop losses accordingly.

The reversal pattern can be seen after a significant obvious trend, when a series of lower high lower low, higher high or higher low is interrupted. This pattern can repeat itself constantly so it's best to identify and react quickly, as many traders consider this chart pattern one of the most reliable and powerful patterns to trade.

How To Use Those Patterns In Your Trading

When you open a chart and try to locate chart patterns that occurred in the past, it’s a fairly easy task once you have them memorised. However, it is more difficult to identify them in real-time and act on the signals that they may provide, especially when trading on lower time frame charts. It might therefore help to use additional tools, such as technical indicators (RSI, MACD) and candlestick patterns.

It is not advisable to rely solely on price patterns for your technical analysis. Combining this information with more identifiers, like technical indicators and trading tools, can be a more effective way of improving your trading strategy and positions in the market.

15 Common Trading Mistakes to Avoid for All Traders

Learn about 15 common trading mistakes and how they can affect your trading. Are you guilty of making these trading mistakes like not having a trading plan, not using stop-loss level, taking too many positions or getting into revenge trades?

What is a trading journal and how to use it?

The trading journal is one of the most underrated tools in the world of trading. The task of keeping such a journal can seem tedious in the beginning, and most traders lack the patience and discipline to update it frequently.