Home / Blog / Education / Blockchain / What is a DAO

What is a Decentralised Autonomous Organisation (DAO)? 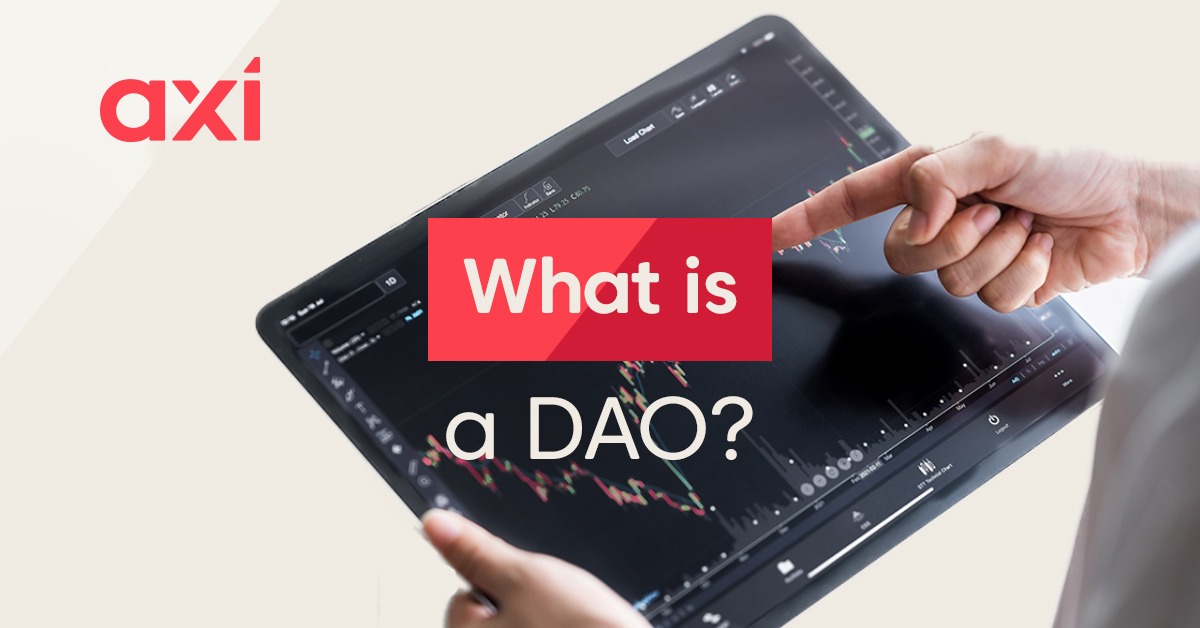 DAO is the new buzzword in the array of crypto offerings aiming to disrupt the traditional models of collaboration and organisation.

A DAO can be used to create nearly any type of organisation, from a decentralised charity to a new kind of online marketplace. Because they are powered by smart contracts, DAOs are immune to traditional problems like bribery and corruption.

Read on to learn everything traders need to know about DAOs and how they are ushering in a new wave of innovation in the crypto space.

What is a DAO?

Decentralised autonomous organisations (DAOs) are internet-native organisations on blockchain networks that are governed democratically by members based on a set of specific rules that automatically execute themselves without intermediaries or central authority.

Unlike traditional organisations, where decision-making is hierarchical and usually centralised with a CEO and major shareholders, DAOs distribute authority democratically among members.

Before decisions are implemented in a DAO, they are submitted as proposals on-chain and members vote on them with their tokens. Any decision reached is automatically executed autonomously via smart contracts.

Since DAOs run on blockchain technology, every interaction within them is recorded immutably on a network of peer-to-peer nodes. And anyone can publicly verify the authenticity of their activities by leveraging the transparency of blockchain systems. 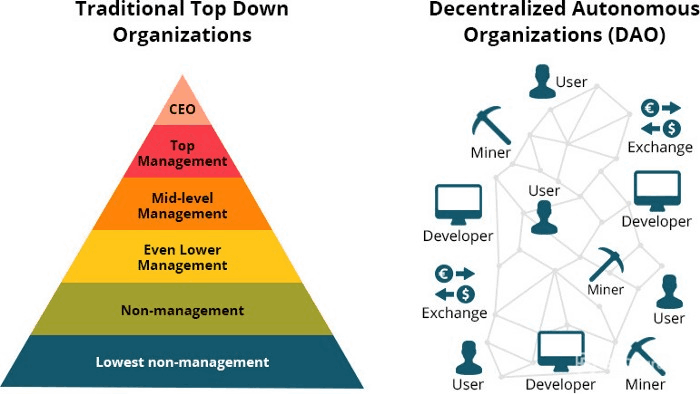 Why do we need DAOs?

In the hierarchical organisations of today, lack of trust is a major issue. Trust is required in the CEO, directors, managers, and employees not to act based on their selfish interests but in the general interest of all stakeholders and customers.

However, DAOs eliminate the need for any form of trust in a central authority as they are collectively managed by a group of stakeholders with aligned interests. The only trust needed in DAOs is in their codes. And trusting their codes is far easier since their open-source nature allows them to be peer-reviewed and tested severely before launch.

DAOs eliminate the series of paperwork and human inefficiencies that slows down traditional organisations of today. For example, in a grant DAO, projects can easily receive funding without going through the stress of establishing legal documents and passing through a series of middlemen before filing for funding.

The decentralised governance model in DAOs also fuels more innovation as any member can propose an innovative idea for stakeholders to consider and vote on. Additionally, DAOs give average investors the ability to invest in seemingly large investments by collectively pooling funds and equally sharing the risks and rewards based on their tokens.

How does a DAO work?

DAOs function similarly to cryptocurrency and DeFi protocols as they're all decentralised applications. However, they go further beyond digital currencies and financial services.

In DAOs, developers encode the purpose and logic for the functional framework of the organisation into a smart contract. The codes are reviewed and tested critically to ensure they are well designed before being deployed on a blockchain network.

After this, the DAO issues out or sells tokens responsible for funding the organisation. These tokens give holders the right to vote on and make proposals while also sharing the losses and profit of the organisation.

DAOs usually have a treasury where the funds garnered from the token sale are stored. The treasury serves as an incentive to enable members to act in the best interest of the organisation.

After funding, the DAO goes live on a blockchain and token holders become solely responsible for its future management. At this point, the developers of the smart contract do not influence the organisation more than the token holders. Any further change will be subject to the governance process of the organisation. The transparency of blockchains enables anyone to audit the treasury of the DAO in real time to gain insights into how its funds are spent.

DAOs can be used in different types of organisations to achieve democratic and distributed governance. In recent times, several DeFi protocols have issued governance tokens to users which enables them to be decentralised.

Beyond the DeFi landscape, DAOs can be used for charity, social clubs, venture capital, and grants. For example, a charity smart contract can be created that receives donations from anywhere in the world and members can decide how to distribute the donations.

When was the first DAO created?

The concept of DAO first came into being via the BitShares project launched in December 2013 by Dan Larimer. Following that was Dash DAO launched in August 2015. However, the first proper iteration of the concept was The DAO, launched in April 2016.

The DAO acted as a form of decentralised venture capital fund collectively owned by members. After launching on April 30, The DAO raised over $150 million worth of ether (ETH) in an ICO that was considered the largest crowdfunding effort at the time. However, experts spotted several vulnerabilities in the smart contract of The DAO.

And before a governance proposal could be voted on to address these issues, an attacker exploited them and drained about $60 million worth of ether from The DAO's Treasury.

To address the hack, a hard fork was carried out in the Ethereum network which saw the siphoned funds being transferred to another smart contract that allowed investors to withdraw them. However, some miners and nodes didn't subscribe to the hard fork by sticking with the earlier version of the network, now known as Ethereum Classic (ETC).

How are DAOs being used today?

The concept of DAOs is gaining traction daily as developers and entrepreneurs are experimenting with the concept to power different types of collaboration.

Let’s explore some of the popular ways DAOs are used in the world today.

Social DAOs bring people with similar interests and values together into online communities governed by tokens. Members can vote on organising projects that fit the value of the community.

These are DAOs that allow people to pool funds together in a smart contract and vote on projects, people, or places to support with the funds.

These are DAOs that are responsible for managing the operation of an underlying protocol (most often DeFi) by making proposals and voting on them through governance tokens.

Similar to philanthropy DAOs, investment DAOs allow people from different spheres of the world who do not necessarily know each other to pool funds together to enable them to have access to high-level investment opportunities.

These are DAOs that onboard talents all over the world to provide services and products for clients. Contributors manage the DAO through governance tokens that represent their stake in the organisation.

Media DAOs employ token incentives to reduce the need for adverts by allowing consumers to drive content and manage the entire media outlet without needing a central authority.

What are the benefits of DAOs?

Discover the benefits of decentralised autonomous organisations below:

What are the issues with DAOs?

With any new projects in the crypto space, there can be issues. Find out some potential issues with DAOs here:

Dash DAO - Dash DAO was founded by Evan Duffield in 2015 to manage how funds in the Treasury of the cryptocurrency, DASH, are allocated and spent.

Maker DAO - Maker DAO was formed in 2014 by Rune Christensen. Maker DAO is responsible for governing and implementing changes in DAI, a decentralised stablecoin.

Constitution DAO - Although now defunct, Constitution DAO was formed in November 2021 by a group of investors who pooled about $45 million in ether within five days in a failed attempt to purchase an original copy of the U.S. constitution on auction by Sotheby.

PleasrDAO - PleasrDAO was formed in March 2021 following a tweet by Leighton Cusack to bid for the auction of an animated video advertisement for the decentralised exchange, Uniswap. Since then the group has gone on to collectively acquire several digital arts for millions of dollars.

FWB DAO - Friends With Benefits DAO is a web3 social club founded in 2021 that uses web3 tools to build communities and foster creative agencies. Many consider it as a kind of decentralised VIP lounge for crypto creatives.

What does the future hold for DAOs?

DAOs are in their infancy and still have many challenges to overcome if they are to go mainstream. With the promises and efficiency DAOs aim to bring to how organisations function, they might be the next big crypto innovation to take web3 to a whole new level.

With time, more DAOs will launch including experimentations on newer models that can solve many of their current challenges. However, time will tell if they can scale beyond the digital space into the physical world and achieve all the lofty demands placed on them.

Keep up to date on cryptocurrencies with Axi and start trading crypto CFDs today!

Investing vs trading cryptocurrency: What's right for you?

People who are starting their journey in the crypto market need to understand the difference between investing and trading.