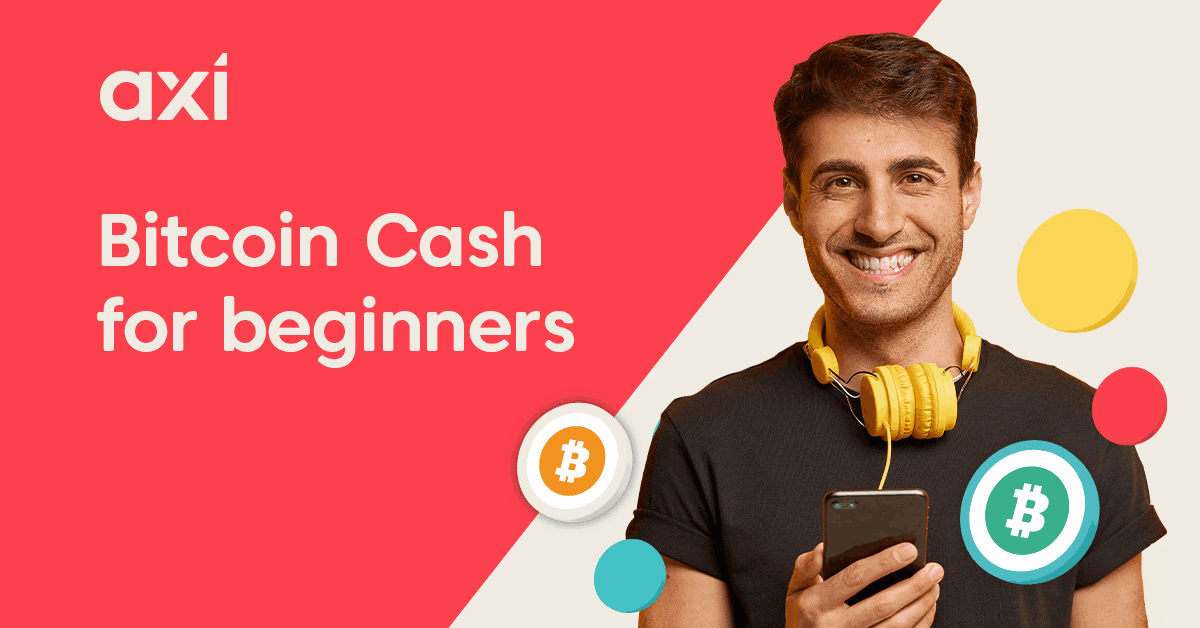 Bitcoin Cash (BCH) is an altcoin created as a fork of Bitcoin (BTC) to provide features that a subsection of the Bitcoin community wanted to see realised.

Created on August 1st in 2017, BCH has a fixed supply of 21 million coins similar to BTC but a larger block size limit, enabling faster transactions and lower fees.

In this guide, we cover everything that traders need to know about Bitcoin Cash, including how to trade the cryptocurrency with crypto CFDs.

What is Bitcoin Cash and how does it work?

Bitcoin Cash (BCH) is a peer-to-peer digital cash that runs on a distributed ledger without relying on financial intermediaries or any form of central authority.

Like its predecessor Bitcoin, Bitcoin Cash uses a Proof-of-Work protocol to reach consensus concerning the state of its ledger. Moreover, all transactions on the network are visible on the BCH blockchain for anyone to audit.

The main ethos behind Bitcoin Cash is that it’s a peer-to-peer electronic cash system that anyone across the globe can use to send and receive near-instant payments at a very low cost.

As a hard fork of Bitcoin, Bitcoin cash inherited some of its characteristics. For example, just like Bitcoin, Bitcoin Cash’s maximum supply is capped at 21 million with a block reward halving every four years.

When was Bitcoin Cash created?

Bitcoin Cash started as a hard fork of Bitcoin in August 2017, following disagreements in the Bitcoin community on how to best scale the Bitcoin network.

In the early days of Bitcoin, block sizes were less than 100KB. Transaction fees cost almost nothing. However, this made its blockchain susceptible to spam attacks. Block sizes later increased to 1MB with an interval of 10mins between blocks to ensure the network is safeguarded from attacks. Since this update, the Bitcoin network has exploded in adoption rate as many became aware of its underlying framework and features, leading to a surge in transactions.

Bitcoin's popularity exposed the scalability issues of its network. Transactions piled up as its block size and time could only allow for the validation of seven transactions per second (TPS). This also saw transaction fees on the network increase as miners prioritised transactions with high fees, crumbling the original vision for a payment currency laid down by Satoshi Nakamoto, the creator(s) of Bitcoin. It was from these issues that Bitcoin Cash was born.

In July 2017, Bitcoin developers implemented a software upgrade that will implement a feature known as Segregated Witness on the network via a soft fork. Segregated Witness would allow Bitcoin to scale through layer 2 solutions like the Lightning Network. Some nodes rejected the idea of SegWit and pushed for another alternative, which will see block sizes increased between 8 to 32MB. They argued that SegWit favours people who view Bitcoin as a store of value instead of a payment currency.

This group later performed a hard fork of the Bitcoin network at block height 478,559 on August 1, 2017. The hard fork saw block sizes increase from 1MB to 8MB, meaning the network could handle up to 25,000 transactions per block while Bitcoin could only manage 1,500 per block. It is this forked network that is now referred to as Bitcoin Cash.

All holders of BTC received an equivalent of their holdings in BCH. Moreover, nodes that implemented the hard fork via updating their software could no longer participate in the Bitcoin network.

Bitcoin (BTC) is the world’s first cryptocurrency that was introduced through the now infamous Bitcoin whitepaper in October 2008. In contrast, Bitcoin Cash (BCH) is a fork of the original Bitcoin protocol.

Bitcoin Cash inherited the same architecture as the Bitcoin network and has almost all the features of Bitcoin. However, the major difference between both protocols lies in their block sizes.

Bitcoin's block size is just 1MB and can only contain 1,500 transactions. Bitcoin Cash, on the other hand, initially had a block size of 8MB during its hard fork but has since expanded to 32MB. The increase in block size has made Bitcoin Cash faster than Bitcoin.

However, more processing power is also needed to validate such large block sizes. That means miners with less computing power can't contribute to network security. It led to the centralisation of mining power with large institutions and organisations, resulting in criticism that Bitcoin Cash only profited the rich.

What’s more, because of its bigger blocks, the Bitcoin Cash blockchain will eventually become too big for individuals to run full nodes, further increasing the centralisation of the network.

There are some positives to bigger block sizes. It enables smaller transactions to be easily managed on-chain. Conversely, on the Bitcoin network, small on-chain transactions are slow and relatively expensive. The cheap transaction fee of BCH is a beneficial option for tipping online creators and making donations.

People who use cryptocurrencies as an alternative asset to store value against inflation or as an investment asset, however, prefer Bitcoin over Bitcoin Cash, considering that the market has decided that Bitcoin is the only “real” Bitcoin, and Bitcoin Cash is just one of many altcoins.

In regards to mining, Bitcoin mining has been more profitable to miners as its price is by far higher than that of its most prominent fork.

How does BCH mining work?

Bitcoin Cash mining works similarly to that of Bitcoin with a few modifications. BCH mining is carried out through a proof of work (PoW) consensus mechanism. In this system, miners solve cryptographic puzzles to bundle transactions into a block. The first miner to successfully solve the puzzle receives a block reward of 6.25 BCH.

Like Bitcoin, block rewards are halved every four years until all BCH in existence has been released into circulation. The next halving will take place in 2024 at block 840,000.

The mining difficulty of the network is slashed in half when blocks are behind schedule for two consecutive days. When blocks are ahead of schedule, on the other hand, the difficulty doubles. This keeps block production at a stable rate even when the network's hash power is higher or lower, as the case may be.

Having shown signs of stability in recent months, many may consider Bitcoin Cash to have always had a quiet time in the market. However, BCH has experienced several price swings in the past. Below are some of the most notable price events over the years.

What is the market capitalisation of Bitcoin Cash?

Where can I view Bitcoin Cash transactions?

One of the exciting features Bitcoin Cash inherited from Bitcoin is its transparency. Anyone can access the complete records of Bitcoin Cash transactions since its inception using a Blockchain explorer.

This section provides a step-by-step guide to trading and investing in Bitcoin Cash (BCH).

How to trade Bitcoin Cash

Traders can trade Bitcoin Cash with the following steps:

How to buy Bitcoin Cash

To buy Bitcoin Cash, traders need to have an account with a crypto exchange, a Bitcoin Cash wallet, and fiat currency to use for purchase. Below are some simple steps to buy BCH.

How to invest in Bitcoin Cash

Bitcoin Cash serves more as a payment currency, but its architecture also presents investment opportunities. Traders can invest in Bitcoin Cash by simply following the steps above to buy the currency and then securely storing it - ideally by transferring it to an offline cold wallet for greater security.

How to store Bitcoin Cash

With these steps below, traders will know how to store Bitcoin Cash:

Discover the advantages and disadvantages of the Bitcoin Cash cryptocurrency below:

What price is BCH expected to reach?

Coming up with price targets for cryptocurrencies is incredibly difficult, given that the crypto markets largely defy traditional valuation methods. However, looking at the historical performance of a digital asset and the developer community backing it can give us some insight into what to expect next.

There were lots of lofty price expectations for Bitcoin Cash during its earlier days. However, BCH has had unconvincing price movements since hitting an all-time high of $4,355.62 in its early days.

Like with Bitcoin, Bitcoin Cash’s price performance will depend on its adoption rate. Standing in Bitcoin’s shadow, however, has made it difficult for BCH to stand out as an open, borderless digital currency, slowing down its adoption rate.

Especially in light of recent developments in the Bitcoin ecosystem with the success of the Lightning Network (which enables instant, ultra-low-fee transactions), Bitcoin Cash has struggled to gain acceptance among merchants and retailers who tend to adopt Bitcoin as opposed to other cryptocurrencies.

Bitcoin Cash may, therefore, struggle to move past its 2017 all-time high, which makes it more of a trading asset than a long-term investment asset.